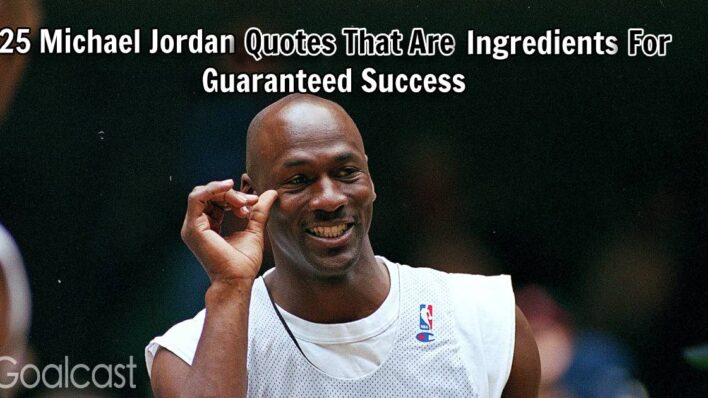 25 Michael Jordan Quotes That Are Ingredients for Guaranteed Success

Coming directly from the greatest basketball player of all times, here are 25 Michael Jordan quotes that are ingredients for guaranteed success.
By Flavia Medrut    February 11, 2020

Coming directly from the greatest basketball player of all times, here are 25 Michael Jordan quotes that are ingredients for guaranteed success.

After playing 15 seasons in the NBA and winning six Championships with the Chicago Bulls, Michael Jordan is widely accepted as the greatest basketball player of all times.

Jordan has been a sports fan for as long as he can remember, and while in high school, he also liked playing football and baseball. However, basketball remained the one sport that he dedicated his entire career to.

The 6-foot-6 player became a legend not only because he is the best at what he does, but because his attitude towards achieving success is incredibly motivating and contagious. Jordan understood that failure is part of the success – no matter how many shots he might’ve missed, at the end of the day, he’s still an absolute champion.

Going into retirement was a hard decision for MJ, but in 2003 he finally decided to end his career as a basketball player. Now, he is the principal owner of the Charlotte Hornets of the NBA.

Jordan has unparalleled accomplishments and after so many years of hard work, he still has this phenomenal positive attitude that keeps inspiring and motivate people around the world.

Here are 25 Michael Jordan quotes that are ingredients for guaranteed success:

One day, you might look up and see me playing the game at 50. Don’t laugh. Never say never, because limits, like fears, are often just an illusion.

To be successful you have to be selfish, or else you never achieve. And once you get to your highest level, then you have to be unselfish. Stay reachable. Stay in touch. Don’t isolate.

My attitude is that if you push me towards something that you think is a weakness, then I will turn that perceived weakness into a strength.

If you quit once it becomes a habit. Never quit!

If you’re trying to achieve, there will be roadblocks. I’ve had them; everybody has had them. But obstacles don’t have to stop you. If you run into a wall, don’t turn around and give up. Figure out how to climb it, go through it, or work around it.

If you accept the expectations of others, especially negative ones, then you never will change the outcome.

I play to win, whether during practice or a real game. And I will not let anything get in the way of me and my competitive enthusiasm to win.

Some people want it to happen, some wish it would happen, others make it happen.

I realized that if I was going to achieve anything in life I had to be aggressive. I had to get out there and go for it.

I can’t speak for the future. I have no crystal ball.

The minute you get away from fundamentals – whether it’s proper technique, work ethic or mental preparation – the bottom can fall out of your game, your schoolwork, your job, whatever you’re doing.

Don’t let them drag you down by rumors, just go with what you believe in.

If it turns out that my best wasn’t good enough, at least I won’t look back and say I was afraid to try.

You have competition every day because you set such high standards for yourself that you have to go out every day and live up to that.

Learning’s a gift, even when pain is your teacher..

It is easy to choose a path of anonymity and lead an empty life. But to strive hard and lead an impactful life, one needs a burning desire to realize dreams.

It’s heavy duty to try to do everything and please everybody. My job was to go out there and play the game of basketball as best I can. People may not agree with that. I can’t live with what everyone’s impression of what I should or what I shouldn’t do.

I know fear is an obstacle for some people, but it is an illusion to me. Failure always made me try harder the next time.

Champions do not become champions when they win an event, but in the hours, weeks, and months, and years they spend preparing for it. The victorious performance itself is merely a demonstration of their championship character.