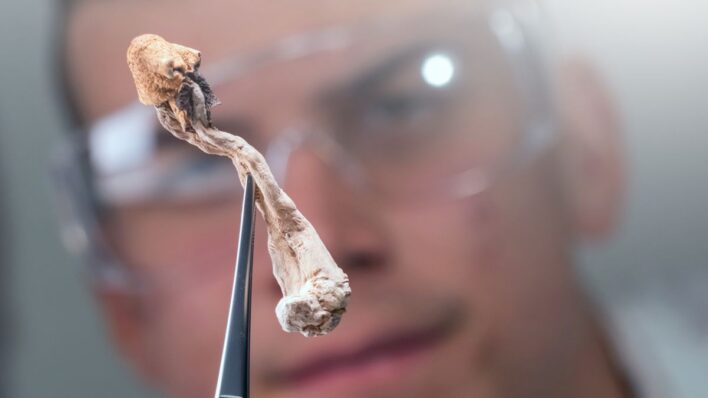 Psychedelics are a tool, but they aren’t the answer.

During the psychedelic revolution of the 1960s, people were encouraged to “tune in, and drop out.” Famous speakers, such as Timothy Leary, Terrence McKenna, Ram Dass, and Alan Watts, spoke enthusiastically and eloquently about the reality shifts possible from psychedelics. The compounds themselves became a symbol of counterculture, and a drug studied, and demonized, by the CIA.

Leary and Dass (original name Richard Alpert) even conducted LSD studies with students at Harvard, before the drug was outlawed in 1968. In the years that have passed, the perspective on psychedelics has changed. An increasing amount of research has explored its benefits in treating depression, anxiety, and other mood disorders.

The days of fear-mongering stories of people jumping off buildings to their inevitable death, through hallucinations and mistaken beliefs about being able to fly, are firmly in the past. In 2017, the FDA even approved psychedelics as a breakthrough drug, and psychedelic therapy is now researched in the most esteemed areas of science.

One practice that is gaining popularity is microdosing — taking small amounts of certain drugs, for small adjustments in mood and consciousness. But is it safe? And what does the research say? Here, we’ll explore the main benefits. And please keep a healthy dose of discernment; I’m not a doctor, and this article isn’t advice. So check with a professional before exploring for yourself.

Psychedelics and the Brain

Psychedelics are known as psychoactive drugs, for their ability to completely alter someone’s consciousness, including their thoughts, emotions, and perception. They’re typically hallucinogenic, and not to be taken lightly. Some are natural, some are man-made. They include the likes of ayahuasca, psilocybin, DMT, and LSD (also known as acid, which was first synthesized in the 1930s).

Neuroscience, the study of chemical changes in the brain, has proven to be an unlikely gateway for the resurgence of psychedelics. By understanding the functioning of the brain, scientists have been able to closely study the effects psychedelics have, a deviation from first-hand accounts that used to be the main criteria in earlier studies. One phenomenon, neuroplasticity, offers an insight into the potential benefits of psychedelics. This explains how the brain’s physical matter isn’t fixed, but malleable, always in a state of change and flux throughout our lives.

Changes in behavior correspond to physical changes in the brain. Although these changes can be brought about by repetition and new habits, psychedelics have a powerful role to play. One of the leading researchers into psychedelics, journalist Michael Pollen, explains this impact in his book, How to Change Your Mind. He cites a metaphor used by Mendel Kaelen, Ph.D., a postdoctoral neuroscientist at Imperial College London:

“Think of the brain as a hill covered in snow, and thoughts as sleds gliding down that hill. As one sled after another goes down the hill a small number of main trails will appear in the snow. And every time a new sled goes down, it will be drawn into pre existing trails, almost like a magnet. In time it becomes more and more difficult to glide down the hill on any other path or in a different direction. Think of psychedelics as temporarily flattening the snow. The deeply worn trails disappear, and suddenly the sled can go in other directions, exploring new landscapes and, literally, creating new pathways.”

These pathways, and different options in the brain, seem to support people in overcoming deeply ingrained behaviors. There are numerous studies showing the benefits of psychedelics in reducing depression, for example, but what’s most encouraging is its ability to support people with treatment-resistant depression. Psychedelics seem to find new pathways that other interventions can’t.

Due to the growing number of studies showing the positive impact on improving mood, healing trauma, and supporting people’s mental health, some scientists have claimed we’re experiencing a “psychedelic revolution.” Like all revolutions, interest in psychedelics is growing, inside and outside of the lab. One of those practices, microdosing, is becoming a wellness trend, with many claiming life-changing results.

Psychedelics, in their very nature, are powerful. Their hallucinogenic properties can transport people to other dimensions, see reality in an entirely different way, have profound insights into the interconnection or oneness of everything, or, on the flipside, experience a “bad trip.” They’re not to be messed with, and their intensity has to be balanced with their potential benefits on wellbeing. That’s where microdosing comes in.

Microdosing is more of a recreational fad, although it has been researched scientifically, too. It involves ingesting a small amount of a drug, just enough to cause a noticeable shift, but not enough to have you talking to trees or quitting your job after a sobering realization about the futility of the capitalist system when compared to the inherently spiritual nature of the human soul. It seeks to optimize the benefits, whilst reducing any trippy side effects that can stop you from functioning on the day-to-day.

Although the restrictions around psychedelics have relaxed (in 2021, John Hopkins Medicine was awarded the first federal grant for psychedelic research in 50 years), they’re still illegal in many countries, which prevents researchers from prescribing them outside of laboratory settings. Naturally, this doesn’t stop those looking to, uh, “do their own research,” by taking a small dose, usually only five to 10 percent of a standard dose, daily.

A study from 2020, exploring the benefit of microdosing psychedelics, found a number of benefits in depression. That included the improvement of cognitive flexibility, divergent thinking (necessary for creativity), a heightened sense of presence, reduced ruminative thinking, and increased self-compassion. Even more impressive is that lower doses of psychedelics were well tolerated and produced little physiological impact.

To understand the wider impact, and application, of microdosing, scientists also interview people about their experiences to gain anecdotal data about the benefits. In 2021, a large study of almost 9,000 participants found that “among individuals reporting mental health concerns, microdosers exhibited lower levels of depression, anxiety, and stress across gender.” The same studies highlight the difficulty in accurately defining what microdosing is; because many people self-administer psychedelics, the frequency, amount, and source all vary, which all point to the need for more structured research.

Psychedelics and Their Spiritual Essence

Despite the growing trend, including a 197,000-strong Reddit community, the jury is still out on whether microdosing is truly effective. The largest placebo-controlled trial to date, for example, found no noticeable difference between microdosers or those using the placebo. But, interestingly, both groups reported an overall improvement in mood, life satisfaction, and cognition. Perhaps this acts as a reminder of the power of the mind in its healing capacity.

Whilst exploring the topic of psychedelics, it’s impossible to avoid its link with spirituality. Many people decide to trip in order to get a glimpse of something beyond the veil of day-to-day living — more open-heartedness, a sense of peace, a connection with everything, a sense of being outside of time. But over-reliance on any substance, no matter how useful, can lead to forms of dependency. In the words of Ram Dass:

“When I reflected on my trips with LSD and other psychedelics, I saw that after a glimpse of the possibility of transcendence, I continued tripping only to reassure myself that the possibility was still there. Sooner or later you must purify and alter your mind, heart, and body so that the things which bring you down from your experiences lose their power over you. Psychedelics could chemically override the thought patterns in your brain so that you are open to the moment, but once the chemical loses its power the old habit patterns take over again. With them comes a subtle despair that without chemicals you are a prisoner of your thoughts.”

It’s a sobering reminder that, even with the benefits of microdosing considered, there’s work to be done. Unlike the clinical application of higher doses of psychedelics, many people who microdose do so, every day, for years. So before considering microdosing, explore other ways you can connect deeply with yourself. Be patient. Be kind. Aim to cultivate the self-compassion and self-care required to ease old patterns. Look for support where you need it.

Any decision to start microdosing, with the intent of boosting mental health, must include a holistic, overall approach to wellbeing. Psychedelics are a tool, but they aren’t the answer.