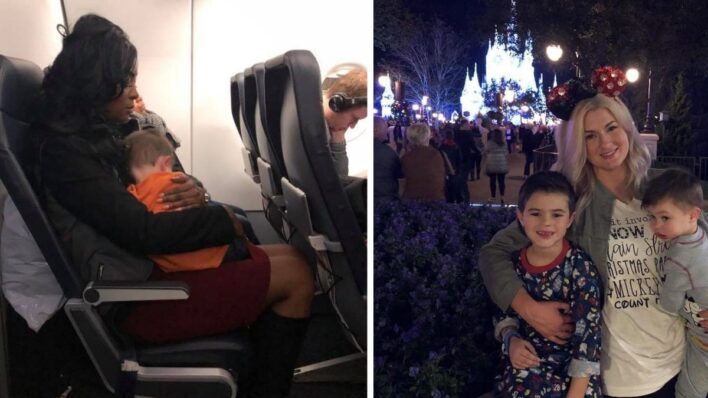 One mother was on the verge of a meltdown until three women did the amazing to help her pull through. Solo mom
By Bryan Liquor    April 1, 2021

One mother was on the verge of a meltdown until three women did the amazing to help her pull through.

31-year-old Becca Kinsey was alone taking her two kids to Disney World since her husband Blake was unavailable.

The usually well-behaved boys, five-year-old James and two-year-old Wyatt, were calm as ever on the trip there.

Then on the return trip, all hell broke loose.

She cleared the path

First, arriving at the airport, Kinsey misplaced her driver’s license, then was sent the wrong way.

“We were standing in line in security, [and I was] on the verge of tears because Wyatt was screaming and James was exhausted.”

“Out of the blue, one mom stops the line for security and says ‘here, jump in front of me! I know how it is!'” she wrote.

She carried the weight

However, when clearing security, a pooped Wyatt fell asleep right on the airport floor.

“I was trying to carry everyone’s carry-on when another mom jumps out of her place in line and says “hand me everything, I’ve got it,” Kinsey wrote.

When I said thank you to both of them they said “don’t you worry, we’re going to make sure you get on that flight.”

To top it off, despite her being on a different flight than Kinsey,  angel #2 took her bags through security to ensure she and her boys make the flight on time.

Oh, but the drama didn’t stop there. As the plane took flight, young Wyatt started screaming.

“I was embarrassed through this whole ordeal,” she recalls to Today.

“I think when you’re traveling with kids, people see you and think, ‘Oh god, they are on my flight.’ And when my kid started crying, I was so worried.”

As both kids settled down to sleep, a woman walked over to the back and told Kinsey “You look like you need a break.” She not only held little Wyatt for the rest of the flight, but took him through baggage claim and into his dad’s waiting arms.

“It really blew my mind. It was nice to see people care about other people,” she tells Today.

The wave of random generosity inspired Kinsey to pay it forward. She invited those among the 889,000 who liked her post to donate $5 towards Kidds’s Kids, a non-profit that gives children with life-altering conditions a five-day trip to Disney World.

After all, she knows just how powerful small gestures can be.

“You don’t need to do something big and grand to make a difference,
sometimes you can just hold the door open”

Kindness creates a butterfly effect: One caring act carries massive momentum the world around. Just imagine how many Becca Kinsey’s your kindness can create.