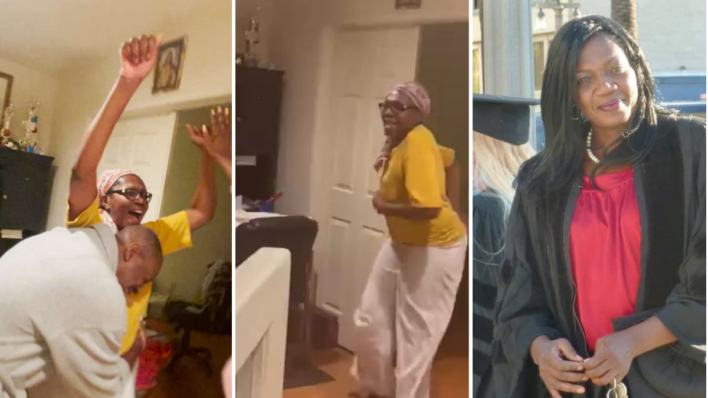 A working mother of four literally jumped from joy after passing the bar exam, accomplishing her long-held dream of becoming
By Joel Balsam    April 29, 2021

A working mother of four literally jumped from joy after passing the bar exam, accomplishing her long-held dream of becoming a defense attorney.

Evelyn Uba always wanted to be a lawyer. When she immigrated to the United States from Nigeria in 1983 at the age of 18 she wanted to go straight to college — but things got off to a rough start. She had financial troubles and her father suffered a stroke soon after she arrived, forcing Uba to put her college dreams on hold.

Fast forward two decades and Uba had gotten married and had children — but she never gave up her dream of becoming a lawyer.

“I never stopped wanting to go to law school,” she told Good Morning America. “After my last child turned 2, I went to a school that I could afford that was conducive to being a mom, going to work, and making payments.”

She struggled to pass the bar exam

Uba enrolled at California Southern Law School in 2005 and graduated six years later — but working as a welfare professional and raising four children didn’t leave much time to study for the bar exam so she could officially become a lawyer.

“I took the exam more than ten times,” she said. “I stopped counting after a while but giving up certainly wasn’t in my dictionary.”

Despite the uphill battle with the test, her children encouraged her.

“My daughter, Naeche, once said to me, ‘Mom, if you give up now, you can’t get your time back. Then what would you have gained out of all the missed time you could’ve spent with us?’ So that always stuck in my head and I knew the only time I’d give up is when I’m dead,” Uba said.

Then in January, Uba received an email confirming she’d finally passed the bar.

“I started jumping up and down,” she said. “I had so many reasons to give up but I knew I just had to keep pushing. I felt so relieved.”

Fortunately for the internet, Uba’s daughter caught her mother’s elation on video and posted it to Twitter, provoking nearly 50,000 likes.

my mom finished law school in 2011 and has been studying for the california BAR exam while raising 4 kids & working full time for the past 10 years. today? SHE PASSED THE BAR!!!!! 🥺🥺🥺

“I felt a huge weight lifted off all of our shoulders,” Vincent told Good Morning America. “It was so surreal and I finally feel like my mom can live out her dream and do whatever she wants with this license.”

As for Uba, she’s now a criminal defense lawyer helping to give a voice to low-income individuals in marginalized communities.

Her message to us all, of course, is to never give up.

“Eventually it’s going to happen when God says it’ll happen,” she said. “It might not be easy but you just have to keep going and never feel sorry for yourself.”

A powerful lesson in perseverance

You can just visibly see the years of pent-up frustration pouring of Uba as she dances around her living room. What a relief that must have been.

And what a relief her story is, knowing that if you work hard enough — like seriously put in a ton of effort — you may very well accomplish what you set out to do.