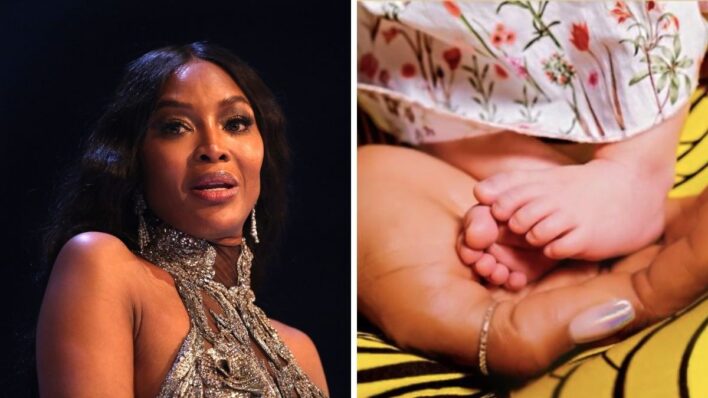 The Truth Behind Naomi Campbell Becoming A Mother At 51

Naomi Campbell becomes a mother at 51 years old creating an outpour of support worldwide and raising questions around motherhood.
By Arielle London    May 25, 2021

Naomi Campbell becomes a mother at 51 years old creating an outpour of support worldwide and raising questions around motherhood.

A woman’s path to motherhood is a very personal journey. While we sometimes think that we are in control of the “when,” the “where” and even the “how” it can happen, our destinies can ultimately say otherwise. The decision to become a mother, or not, is one that we as women can think about at length over the course of our lifetimes.

So, when we do want children, and are finally blessed with a child of our own, our levels of gratitude for the universe expand exponentially. There are few things in this world more powerful than a mother’s love, and Naomi Campbell is now experiencing that love firsthand.

This week Naomi Campbell announced that she has officially become a mother to a baby girl. She welcomed her daughter into her arms and introduced her to the global community in a touching Instagram post.

The debut photograph is of Naomi lovingly holding her daughter’s precious feet, and the caption reads, “beautiful little blessing has chosen me to be her mother, So honoured to have this gentle soul in my life there are no words to describe the lifelong bond that I now share with you my angel. There is no greater love.”

Much like Janet Jackson, who gave birth at the age of 50, Naomi’s age has prompted many to reassess and question their ideas on motherhood. It’s definitely worth taking some time to investigate these reactions.

Becoming a mother in your 50s…Is it too old?

The love and outpour of support for Naomi experiencing this new milestone in life has been incredible. People from all across the world are happy for Naomi but there are also those who are hurting behind closed doors from the news. Naomi Campbell has every right to become a mother at any age and enjoy in that moment, however there are those who have heard the news who may feel surprise, shock or even possibly hurt as well.

Infertility and the inability to have children is a very sensitive subject for many people, but particularly women across the globe. Many women experience infertility issues, or simply have not had the right circumstances align for them to become mothers themselves, and some just don’t want to become mothers, period. All routes and situations are different realities, and the ones that align to allow you to become a mother when you want to be are a blessing.

Naomi is now revelling in her blessings. Campbell posted on her 51st birthday this Saturday an Instagram post with the caption reading, “BLESSED AND GRATEFUL,” tagging her mother Valerie Morris Campbell and adding a heart and prayer emojis. People reports that Naomi had thoughts of becoming a mother for years. A source told the publication, “She’s wanted a baby for a long time, more than 10 years,”

The source continues saying, “And anyone who’s surprised Naomi is having a baby on her own, her own way, and on her own timetable doesn’t know Naomi Campbell.”

Then with complete accuracy the source adds, “hasn’t she redefined everything she’s ever touched?”

But how did Naomi become a mother?

That’s a question many have asked in the aftermath of her announcement. Indeed, becoming a mother at 51 is not a usual occurrence. Depending on your geographic location, community, career level etc., society places certain expectations and labels on women dependent upon their parental status. You are viewed and treated differently depending on whether or not you have, intend to have, or never intend to have children.

There are many different paths for women to pursue when it comes to motherhood. Natural birth, IVF, adoption, surrogacy, childless, and the list goes on. No choice is the wrong one, and one thing that is for certain is that the choice is a woman’s to make.

The iconic supermodel made her decision and deserves to experience all of the love that a mother-daughter relationship can provide. It is understandable for some women who cannot have children to possibly feel emotionally stirred by Naomi’s decision to become a mother at 50, no matter how she achieved it.

While Naomi is not obligated to reveal how she became a mother, it’s still important to look at the other side of the story. The coverage of the news through media can have an indirect effect on women who want so badly to become mothers but simply cannot or haven’t been able to. We have to remember the costly nature of IVF treatments or adoption and how both of these options are not readily accessible to women who want to become mothers but are unable to.

Motherhood is not the only gift available out there

Motherhood is about many things, but most importantly, if that person is ready to nurture and love another human being unconditionally for the rest of their lives. Naomi Campbell is, and now she has a daughter to guide and journey through life with together.

It’s easy to get caught in the sensational headlines, and not knowing the how can fuel speculations. But it’s important not to disregard the reality of women who may not be able to afford adoption or IVF treatments. We can be happy for Naomi while still recognizing that many other women may not get the chance to explore their options the same way.

Our lives all hit different milestones at different times. Comparing your journey behind closed doors to someone else’s journey, especially their moments that are public highlights, will rarely lead to positive outcomes. Motherhood is a gift indeed, but it is not the only gift available to women out there. Whether it happens or not in a woman’s life should not be a defining criteria or judgment of her value as a person.