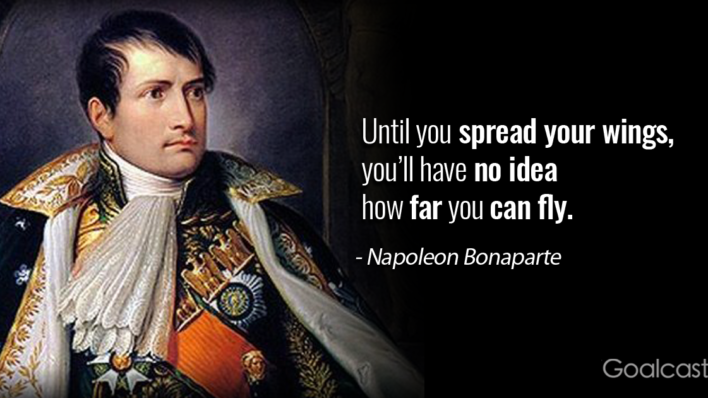 Napoleon paved his own path to success. Starting as a second lieutenant, he used his military genius to ultimately take a position that no one had occupied prior to him. When he came to power, Napoleon tried to correct the harm done during the reign of terror.

Aside from being triumphant in battles and building an empire, Bonaparte also laid the foundation for modern French Education and created a set of laws (known as the Napoleonic Code) based on common sense and equality.

Napoleon was an extremely ambitious and intelligent man, known for his ability to multitask. While European countries formed coalitions trying to defeat him, he was able to escape even from exile and take over his empire again for a brief period, before losing the famous Battle of Waterloo.

Here are 16 Napoleon Bonaparte quotes to help you build a stronger character. Ability is nothing without opportunity.

Courage is like love; it must have hope for nourishment.

You become strong by defying defeat and by turning loss and failure into success. Impossible is a word to be found only in the dictionary of fools.

Great ambition is the passion of a great character. Those endowed with it may perform very good or very bad acts. All depends on the principles which direct them.

There are only two forces that unite men – fear and interest.

If you want a thing done well, do it yourself.

Take time to deliberate, but when the time for action has arrived, stop thinking and go.

Nothing is more difficult, and therefore more precious, than to be able to decide.

Never interrupt your enemy when he is making a mistake. Until you spread your wings, you’ll have no idea how far you can fly.

A leader is a dealer in hope.

Riches do not consist in the possession of treasures, but in the use made of them.

History is a set of lies agreed upon.

The fool has one great advantage over a man of sense; he is always satisfied with himself

You must not fight too often with one enemy, or you will teach him all your art of war.