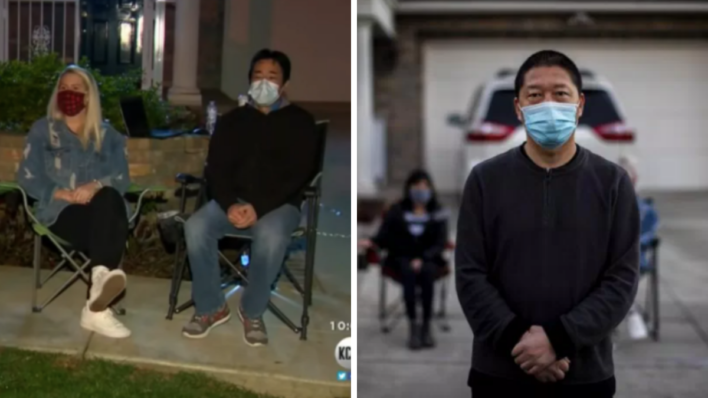 Community will always defeat racism if we support each other. Teenagers harassed them nightly Since moving into Ladera Ranch in
By Joel Balsam    March 19, 2021

Community will always defeat racism if we support each other.

Since moving into Ladera Ranch in Orange County, California, the Si family has been experiencing racist attacks. Teenagers come to bang on their door and yell racist remarks on a nightly basis like “go back to your country.”

“My kids are scared. I’m very annoyed,” Haijun Si, 48, told The Los Angeles Times. “At night, my wife and I could not sleep for more than three or four hours.”

Si tried installing a $3,000 wrought-iron fence around his front porch and put up floodlights and cameras around the property, but the harassment kept coming.

The neighbors stepped in

When Layla Parks learned about the racist attacks the Si family was facing, she felt “physically ill.”

“I did not understand the extent of the harassment and how often it was occurring, at first,” she told The Times. “I was immediately outraged and wanted to help.”

On a neighborhood Facebook group, Parks posted footage captured by Si’s security cameras of a recent attack. She then asked for the neighbors to stand up for the Sis, and post a nightly watch from 6pm to midnight.

So neighbors signed up, posting watch on lawn chairs, in their cars or by patrolling the nearby parks. They were especially keeping an eye out for teenagers, an age group suspected of doing the harassing.

“This is what we do all night,” Parks told The Times. “We see kids and we go ‘OK, are they good or are they bad?’ Are they coming this way?”

Since the nightly watch began, two teens have apologized and the attacks have reduced but not stopped altogether.

One night, a group threw rocks at Si and volunteers on the front lawn.

But the community responded yet again — this time, putting on a cultural festival to celebrate the Chinese Lantern Festival.

“I’m so thankful for my neighbors,” Si told The Times.

A pattern of violence

These attacks came just days before the horrific shooting of Asian Americans in Georgia. It also comes in the wake of racist attacks across the country, including the stabbing of a 91-year-old in Oakland’s Chinatown.

“We’re seeing an epidemic of hate right now, and we have to stand together,” state Senator Dave Min (D-Irvine) said at the cultural event in support of the Si family.

What the senator said is exactly right. We cannot let racists and the murderers win. We must stand up for our neighbors, like this community did, whether they’re literally living on our block or across the country.

In the end, compassion will win. It always has and always will.