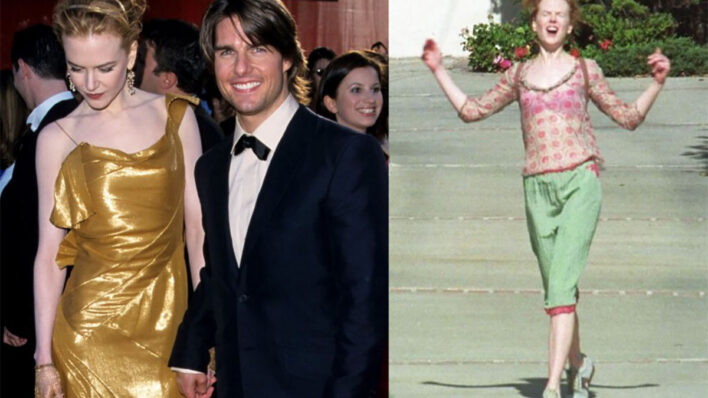 What We Can Learn From Nicole Kidman’s Infamous Breakup Photo

After nearly two decades, Nicole Kidman’s infamous breakup photo is just as empowering and inspiring as it was when it first came out.
By Flavia Medrut    September 12, 2019

After nearly two decades, Nicole Kidman’s infamous breakup photo is just as empowering and inspiring as it was when it first came out.

We’re so in love with Hollywood power couples, but sadly those glamorous relationships often end in disaster that is thrust into an even harsher spotlight. Once such a couple breaks up, everyone is hungry for all the spicy details that led to the separation.

Take, for example, Nicole Kidman and Tom Cruise, who met and fell in love on the set of the movie Days of Thunder.

“He basically swept me off my feet. I fell madly, passionately in love”, she told Vanity Fair in 2002, and Tom was just as love-struck as she was.

They were clearly into each other. Nicole’s excitement for her husband was obvious. They wanted to quickly start a family so the couple adopted two children in the ’90s — their daughter Isabella and son Connor, and enjoyed being parents before they got divorced in 2001.

No one really knows the true reasons behind the breakup since both stars chose to be very discreet about their personal misunderstandings.

However, over the years Kidman has made a few comments on her marriage with Cruise, though nothing scandalous and nothing that would make her ex-husband look bad in front of his fans.

Living in the shadow

The coupled starred together in a few movies, but Nicole felt like she was pushed into Tom’s shadow during their marriage. She began to doubt herself and lived under the impression that she was there only because of her famous husband, that she didn’t have a real contribution.

“I got married very young, but it definitely wasn’t power for me – it was protection. I married for love, but being married to an extremely powerful man kept me from being sexually harassed. I would work, but I was still very much cocooned. When I came out of it at 32, 33, it’s almost like I had to grow up,” she wrote in an essay for New York Magazine.

Nicole Kidman is currently the mother of four children, but while being married to Tom Cruise she experienced two miscarriages.

Losing the first pregnancy was traumatic enough since she desperately wanted a child, but the second miscarriage devastated her as the event happened toward the end of her marriage with Cruise.

They say a picture is worth a thousand words

Breakups are often messy, and never easy. We’ve all seen some pretty bad celebrity breakups — all images captured after such an event portray a thousand emotions, and none of them are positive. There’s usually deep sadness, tears, anger and some sort of fear of abandonment in the eyes of the ex-partners.

But not for Nicole Kidman! The infamous photo taken when she left an attorney’s office after her divorce settlement with Tom Cruise is rather inspiring for anyone who has decided to put an end to their relationship.

Nicole looks like a real winner. She seems relieved and full of joy. And while these are not common feelings after a breakup, the look on her face simply tells us that she is happy with her choice.

She celebrated a new beginning

Why dwell on the past, on a relationship that has already emotionally drained you? No matter how bad it hurts, once you decide to end it, you should always look forward.

There’s no regret whatsoever on Nicole’s face. With the sun lighting up her face, she is happy that all the fuss is finally over. She looks ready to start a fresh new chapter of her life.

It wasn’t easy getting over a 10 year marriage. Nicole later admitted that she was running from her life at that time, but as an actress she had the chance to get lost in someone else’s life. It was probably ten times harder to focus on her roles, but it definitely came in handy. Starring in The Moulin Rouge and The Hours allowed Kidman to take a break from the harsh reality.

She kept her sense of humor alive too. In one interview with David Letterman Nicole said: “I can wear heels now. Let’s move on!” We’ll let you figure this one out.

It took a number of years for Nicole to get herself together and working was her biggest ally. Her hard work culminated in winning an Oscar, but while holding the golden statue and other fellow actors cheered, she still felt lonely.

Nicole Kidman met country singer Keith Urban in 2005 and got married in 2006. Over the years they’ve had some ups and down, just like everyone else, but they’re still together. Despite being married for over a decade, Kidman and Urban are now one of the most romantic couples in Hollywood.

The actress went through a difficult journey in becoming a parent, but in 2008 she successfully gave birth to daughter Sunday Rose in 2008, and the couple had Faith Margaret in 2011 via surrogate.

Treasure the past while moving forward

It’s been 18 years, but Nicole knows to respect her past and her present by keeping things private.

“I feel it’s almost disrespectful… to Tom and disrespectful for Keith. So I try to stay in the here and now” she told The Today Show.

Whether she’s respectful or simply trying to avoid painful memories, one thing’s for sure: publicly discussing a divorce can’t be easy. While other couples throw mud at each other after a messy breakup, Tom and Nicole kept it cool and moved on with their lives.

When it comes to talking about her past relationships, Nicole chooses to remain the elegant and classy woman we’ve always known. To us, this just seems like one of the healthiest ways to handle a breakup.