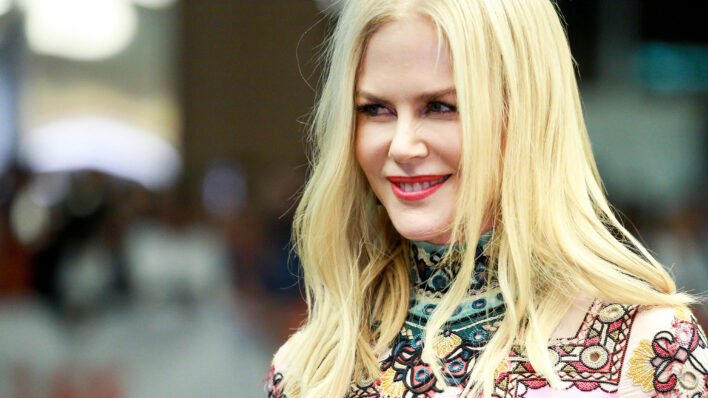 You know her most recently for her award-winning performance in HBO’s hit series Big Little Lies — but Australian-American actress
By Lindsay Tigar    July 31, 2019

You know her most recently for her award-winning performance in HBO’s hit series Big Little Lies — but Australian-American actress and producer Nicole Kidman has been gracing audiences for decades.

Kidman’s performances have earned her two Primetime Emmy Awards, five Golden Globe Awards, and an Academy Award. Since breaking into show business in the early 1980s in the land down under, she’s become one of the highest-paid actresses in the world, as well as one of the most influential people.

With lead roles in many iconic films including Batman Forever, Eyes Wide Shut, The Hours, Moulin Rouge, Cold Mountain, Stoker, and countless others, her net worth has skyrocketed to an estimated $130 million. In addition to her career accolades, she’s also been a Goodwill Ambassador for UNICEF since 1994 and for UNIFEM since 2006.

Let Nicole Kidman’s habits and mantras inspire you to give back:

1. She marches to the beat of her own drum

In an interview with Vanity Fair, Kidman was clear nothing has quite changed since she started acting 30 years ago.

Not only does she march to the beat of her own drum, so to speak, but more importantly, she is careful about her projects, and only selects those that she ‘vibrates with.’ In this way, she describes herself as very left-handed and lateral — with a weird taste.

“I’ve done weird films and I’ve done things that are so obtuse, which I’m still committed to because I like performance art and not conforming to what everyone expects of you. I don’t think in normal terms,” she told Vogue.

Perhaps her husband, singer-songwriter Keith Urban, describes her best: “You’re so not mainstream.”

Kidman thinks it’s important to only do those things that speak to you. After all, she believes you’re the only one who can tell yourself when you’re “over.”

“There isn’t a shelf life like there used to be. That’s why it’s so important to keep changing. We live longer now, if we’re fortunate. So there has to be a place to put all that creative energy,” she shares.

2. She sees fear — and walks through it

Growing up, Kidman’s mom challenged everything: her daughter, the system, anything. This gave Kidman a backbone and it helped her to develop a different relationship with fear than most people may experience.

Though in an interview with Vogue she admitted she sometimes wishes she had a mother who coddled her and told her she was wonderful, she raised a woman who was determined to push through anything — including those experiences that frightened her the most.

Even so, Kidman doesn’t see herself as fearless, but rather as someone who is fearful at times — and decides to walk toward — and past — it.

“I did a play in London recently, and that was really debilitating fear, and every day I just had to go, ‘Okay, get through it.’ I had pure stage fright on the side of the stage where I would have rapid heartbeat and that was frightening, but it was one of those things of just going, ‘I just have to work through this,’ and I think I’ve just always been compelled to do that,” she told W Magazine.

3. She owns her mistakes and successes

If you ask those who have found the most success and peace in their lives, it won’t be because they have a clean slate. It also won’t be due to the fact they’ve made the right decisions or merely stayed on the safe side. Rather, it’s people like Kidman who aren’t afraid to be human — both in good times and in the sour ones.

Jane Campion has worked with Kidman since the early 1980s spoke volumes of her resilience to Vogue. “She has the humility to reorganize herself. if something didn’t work, it didn’t work. It’s a key quality to be able to call a blunder a blunder and to say, ‘I want to fix it.’ I’ve seen how low she has been, and how she’s pulled herself back. It’s inspiring.”

4. She feels everything, onscreen and off

In every great relationship, there’s a balance of personalities. For Kidman and Urban, the same could be said — even if she believes her husband is better at feeling something and then letting it go.

As for Kidman? She told Vogue she doesn’t “skim” what she’s processing, and allows herself to be vulnerable and real. “He says I’m an actor and he’s just a performer, an extrovert. He gets up onstage and connects with his audience every night through songs and joy and love. Darkness is not a huge part of his art,” she explained.

While it could seem like a negative quality, Kidman believes it’s paid off in her career, especially since part of being an actress is connecting with audiences and putting yourself deeply into character development.

“I’m far more raw and honest now, because before I used to be so scared. So now I’m just like, ‘What the hell. Share, share ideas, share,’” she told Vanity Fair. “And it’s not safe to do that sometimes, because you’re suddenly exposed. But at the same time it makes you feel closer to people.”

5. She acknowledges the beauty of time

When you page through the chapters of your life, there are always stand-out moments that replay. But as you collect more candles on your birthday cake, you may feel as if time has been the biggest blessing of all.

At least that’s the case for Kidman, who told Vogue everything becomes more meaningful as we get older. “It’s crazy. Big Little Lies means more. Lion’s success means more than Moulin Rouge’s success. When you’re young you have that slightly laissez-faire approach to everything. I know what Vogue is in the world. It’s an institution, and to have been on it is ‘wow!’