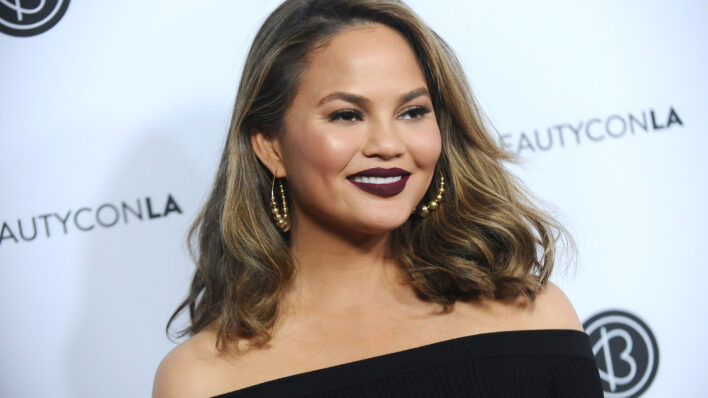 To follow Chrissy Teigen on Instagram or Twitter is to love her. This model, author, chef, host, and mom of two says it like it is — and does it all with a laugh. Her relationship with husband John Legend, her experiences in parenting, and her cooking skills make her social media stream an engaging and hilarious destination.

Throughout her career as a model, she’s graced the covers of many mags from Sports Illustrated to Cosmopolitan and walked runways. Her cookbooks have topped best-seller lists, and her hosting of Lip Sync Battle has received rave reviews.

With a networth of $26 million — and growing — this superstar (and supermom) has a few metrics of life she subscribes to.

Here, a few of Chrissy’s daily habits to inspire you:

1. She uses her kids as motivation — in more ways than one

As any new parent will share, there’s nothing quite like the transformation of bringing a child into the world. For Teigen, who has openly shared many of her struggles with both infertility and postpartum depression, adding “mom” to her laundry list of titles has fundamentally changed her perspective of the world.

One of the most powerful ways is her new way of viewing the world through her daughter’s eyes.

“Luna’s bringing out so much of my personality that I was too anxious to share in the outside world before. Now, I get to be goofy and silly. Luna has this crazy obsession with having me do her nails, so when you find things that they love, you turn that into entertainment, like ‘Oh my gosh, let’s have a tea party with lion and Big Bird. Pick a nail color and Mommy will do your nails,’” she shared with Good Housekeeping.

2. She knows that she has the power to change her own mind

Everyone has those moments when they glance at the mirror and they aren’t satisfied with the reflection they see. This is true even for a mega model like Teigen, who had to learn to shift her negative thoughts toward her body, post-babies.

In an effort to celebrate the tremendous power of a woman’s body and accept herself for every little piece of a person she is, Teigen focused on self-talk.

“It’s all about trying to be happy with myself. Because I’m not blind: I see my body, I see the difference in shape, I see that I gained weight. But I also see with those same eyes that I have a beautiful baby boy, and this little girl that’s relentless and amazing, and I am very happy,” she shared with Good Housekeeping.

“This is a new thing that I can change within my mind, that I don’t have to be a swimsuit model anymore. I get to be a mommy, and I get to cook, and I get to meet incredible people, and I’m happy to be going through this transition.”

In addition to her many, many roles, Teigen is an entrepreneur and continues to have various gigs that add to her empire. But if you call it an ‘empire’ — she would probably shake her head. When Elle asked her if she was going to build a large company like Gwyneth Paltrow, she admits she’s more of a ‘day-at-a-time’ type of gal.

“I have no idea what I’m doing next week, let alone next year. I don’t plan things, honestly. I never had any set goals. What motivated me was seeing other people do stuff. Like, ‘Wow, she has a cookbook and she’s not a chef, so I can have a cookbook now?’ That’s how I grew in confidence,” she revealed.

If you don’t follow Teigen on Insta or Twitter — consider this your wakeup call. With genuinely funny and gut-wrenchingly honest responses to modern culture, other celebs and political figures, she’s outspoken — and unapologetic.

While it may come across she’s careless about her public opinion, she told Vogue it’s quite the opposite. In fact, the views of others weigh heavily on her: “Much stronger people are like ‘I don’t care what you think.’ I genuinely do care. I think it’s funny when people are like, ‘I love how you just don’t give a f—.’ I’m like, ‘Oh my God. I give so many f—s.’ I want to be liked.”

5. She found her voice early on — even when others didn’t want to listen

Part of developing a brand — whether you’re in influencer or just an aspirational professional — is staying true to your colors.

In an interview with Harper’s Bazaar Singapore, Teigen called herself stubborn and happy because she didn’t listen to critics who wanted her to pipe down.

“It wasn’t really an accepted thing within my modelling and TV career early on. I would get in trouble, lots of phone calls from agents saying ‘Why did you tweet this? Now we’re in trouble with such-and-such a contract because you were too outspoken,’” she continues.

“I got so much feedback that I needed to watch my mouth if I wanted to work with certain people. And I remember sobbing so much because it was just the worst feeling, letting people down. I definitely lost work because people would shy away from being associated [with me], and I totally get it, too—they have to appeal to everybody.”

But now? She’s an open book — and that’s just fine with her: “I feel like everyone knows what they’re getting now and it’s a very comfortable place to be in life.”