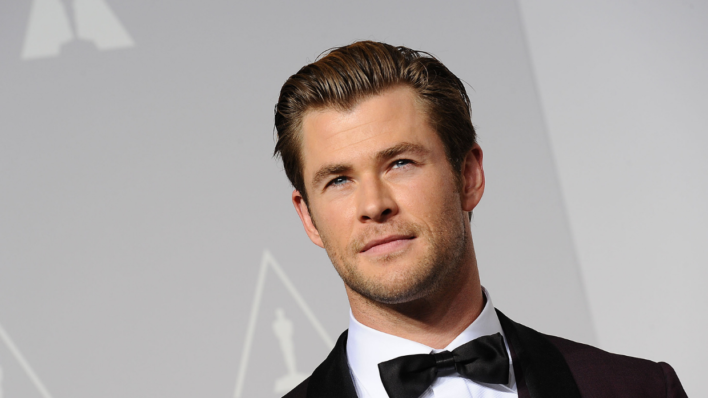 It’s hard not to love Chris Hemsworth — even when he’s portraying a troubled, bingeing Thor in the latest Avengers:
By Lindsay Tigar    June 21, 2019

It’s hard not to love Chris Hemsworth — even when he’s portraying a troubled, bingeing Thor in the latest Avengers: Endgame. Even when he’s not at his pristine level of fitness, he’s still a pretty stellar actor.

His call to fame arrived in his home country of Australia when he starred in the Aussie-made series Home and Away. Since then, he’s excelled as a superhero in the Marvel series, as well as key parts in various thrillers and dark-fantasy hits like The Cabin in the Woods, Snow White and the Huntsman, and Rush. These days, he’s also flexing his action-comedy muscles with roles in movies like Ghostbusters and Men in Black: International.

When he isn’t wowing audiences, Hemsworth is a happily married father of three who happily chats about his love for his wife Elsa Pataky, his bond with his kids, his relationship with his equally-famous brothers Liam and Luke, and how he balances it all. He must have some secrets up his sleeves, considering he’s amassed an astounding estimated net worth of $90 million.

Here, a few of Chris Hemsworth’s habits that may surprise you:

When Hemsworth was first starting out in his field, auditioning right and left, he asked his dad if he thought it’d ever pay off. His response: “Honestly, probably never.”

Even without a vote of confidence, he decided he wanted to be a shining example of people who did, in fact, make it, against all odds.

“I was super active with auditions. Then in that eight-month period, I got more and more anxious, to the point where I couldn’t harness that energy. I was trying to convince myself I wasn’t nervous before auditions rather than grabbing hold of it…” he shared with Men’s Health.

When he was about to give up, he decided he would do one more audition before packing up and heading back to Australia, defeated. “That was for The Cabin in the Woods, and I got that job, and from there I got Red Dawn. And then I got Thor,” he shared.

Now, he approaches auditions like a baseball player. He goes up to bat, gives his best swing, and moves onto the next play.

“You can’t be thinking about that last one.That’s where the fear comes when you’re like, ‘Oh God, everything’s relying on this one single moment.’ Which nothing is. No single moment ever defines your journey. There are so many complicated pieces of the puzzle. I’ve found it comforting letting go a bit.”

He stays fully himself

Sure, it took some trial-and-error, setbacks, doubts, and plenty of failures, but eventually, Hemsworth he stopped trying to be who he thought he had to be to become successful in the industry. Instead, he started approaching Hollywood as 100 percent himself.

“I’ve learned to truly be myself. [When I figured that out] that’s when things started to change. I felt happier, and my work got better,” he told Men’s Health UK.

With this newfound confidence he realized how much he really had to offer that he was discounting by putting on a mask.

“I got a better response; my work got better. It’s an interesting one, to have people who inspire you, your hero—if you try to mimic that, it’s just not true to yourself. You can allow them to be an inspiration on step one, I guess. But the real work is, who am I?”

Fear of boredom motivates him

Curious by nature and fueled by a new challenge, there’s only one thing Hemsworth is truly afraid of: twiddling his thumbs. Sitting pretty. Not being able to have new adventures or experiences. In fact, his anxiety toward boredom is what inspired him to become an actor in the first place.

“There’s so much going on, different settings, different movements, different people, keeps me interested. What scared the hell out of me, was not wanting to do the same thing every day. Not hating my job when I grew up,” he shared with Viva Press. “I had people all around saying, that’s the way it is and that was not going to happen to me. I think that’s what motivated me, that fear, what keeps me staying open, trying to learn new things.”

He’s grateful for the wait

You know how the saying goes: anything worth having doesn’t just fall into your lap. In fact, it’s all the strife and lessons from the experiences that build you into a person ready to tackle the lifestyle you want.

As he told Providence Journal, he’s actually thankful it took time for the pieces to line up. “I walked the gamut of what you can experience in this business in that period, and no one was paying any great attention — which was awesome. By the time I got to Hollywood, it was like: Now it’s time to work, and I know why I love it. I kind of got a chance to start again.”

He focuses on one goal — and one goal only

Many leaders will share they are their best selves and experience accomplishments when they have a laser-focused goal. For Hemsworth, it’s clear: he wants to make movies.

This attention to detail and singular path was inspired by a conversation he had with Tom Cruise who said, “I just want people to see my movies. I don’t want to put that much blood, sweat and tears into it, and have it come and go.”

In an interview with Variety, Hemsworth explains he loves the theatrical experience and wants to share it with others. “I think there’s nothing quite like it, and the industry will change in a big way if we don’t get people to the cinema.”