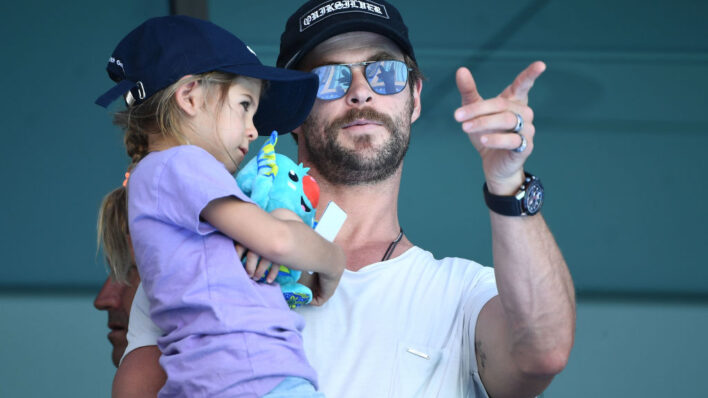 Chris Hemsworth Talks Work-Life Balance, Reminds Us of the Things We Should Never Lose Sight Of

It ain’t easy being a real-life superhero, even if fan-favorite Chris Hemsworth makes it look so. Speaking to CNBC, The
By Eliza Theiss    June 13, 2018

It ain’t easy being a real-life superhero, even if fan-favorite Chris Hemsworth makes it look so.

Speaking to CNBC, The Avengers: Infinity War star spoke of how difficult it still is to have proper work-life balance. Even for a star of his caliber, “half of the time it’s out of my control.” But when he does have a say over his schedule, Thor does all he can to focus on the things that really matter: his wife and children back home in Australia.

And if he can’t be home as much as he wants to, Hemsworth tries to include his kids into his work-schedule as much as possible: “If I do have to go to work, I try and bring them with me.” For the father of three “you’ve just got to make the effort” when it comes to family.

What started as a ground breaking music video ended in a savage attack by a cowardly K9. Never work with Kids or Animals. #wreckingball #wreckingdog #daddydaycare #murderonthedancefloor @mileycyrus @liamhemsworth pic.twitter.com/1xuNLd3xdQ

For Hemsworth, part of that effort was moving back to Australia with his family. Now happily settled in the hippie surfer town of Byron Bay, Hemsworth says his family did not do well in Hollywood. “It’s suffocating and you stop becoming a person. You have nothing to draw from because you’re living in this world of pretend on and off screen,” he told GQ Australia.

Hemsworth also revealed the strain his career had put on his relationship with wife Elsa Pataky: “In terms of work, she’s certainly given up more than I have. She’d like me to step back and be at home with the kids more, and of course, I want that too.”

Unfortunately, work still get in the way a lot, especially as he’s thinking of his career long-term: “I’m at this crucial point in my career – I’ve just got to set up for longevity or I’ll slip off.”

But during his eight years of marriage, Hemsworth has learned more lessons than nurturing a healthy work-life balance and spending more time with the kids. “My wife and I fell in love, had kids, didn’t really see each other for a few years, then fell back in love,” he summarized the early years of his marriage to GQ Australia.

One of the best weekends ever thanks @orpheusisland and @australia. If you haven’t been then add it to the long list of amazing places to see in Oz, it’s a must! @elsapatakyconfidential @emerysurfboards @lukemun @aprilmun @avminaircharter

Thor may be a doting father, but he learned the importance of setting time aside just for himself and his wife: “Once you have children, every instinct and every moment of your time is consumed by that.”

But that too can put a strain on a happy homelife, so he’s since made a point of reconnecting: “Make sure you have date night even if it’s once in a blue moon.”