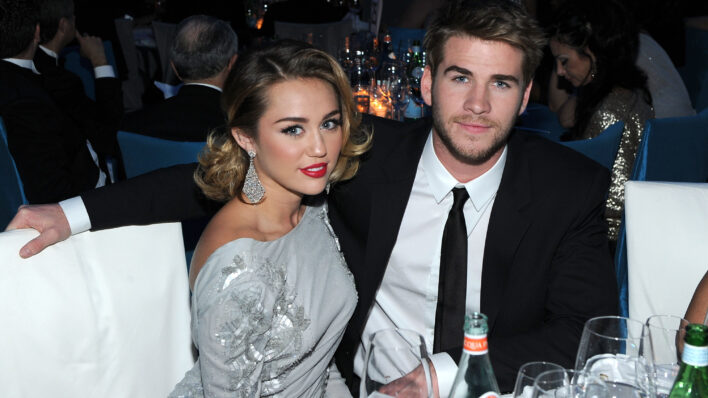 Welcome to #RelationshipGoals, where we’re giving the stage to the power couples we admire. From admirable long-term relationships to inspirational
By Matt Valentine    February 6, 2019

Welcome to #RelationshipGoals, where we’re giving the stage to the power couples we admire. From admirable long-term relationships to inspirational

In 2008, Miley Cyrus, then Disney star of Hannah Montana fame, and an unknown Australian actor were cast alongside one another in the film The Last Song, a cinematic adaptation of the Nicholas Sparks novel of the same name.

And while the film didn’t exactly get hot reviews with critics or audiences, the heat was picking up between Cyrus and her Australian costar Liam Hemsworth, who started dating while shooting the film.

Little could anyone know at the time just how much media attention Cyrus’s and Hemsworth’s relationship would get over the next several years and even less just how long the two would last.

Why Miley Cyrus and Liam Hemsworth are a true power couple

One year after The Last Song completed filming, in March of 2010, the pair made their red-carpet debut at the film’s premiere appearing very much in love.

“It’s refreshing to work with an actor who isn’t also a singer and dancer and musician and artist and this and that. I’m sick of quadruple threats,” Cyrus told Teen Vogue during a photo shoot with the couple to promote the movie.

But as each of their respective careers began to take off, Cyrus starting a new chapter with the airing of the final episode of Hannah Montana and Hemsworth unknowingly on the verge of stardom beginning filming on the first Hunger Games film, the media attention they began to attract was challenging to adjust to.

“I’m not engaged. I’ve worn this same ring on this finger since November! People just wanna find something to tal about! It’s a topaz people!” Cyrus said responding to engagement rumors in a Twitter post in early 2012.

However, several months later, on May 31st, Hemsworth would propose to Cyrus with the couple later confirming their engagement to People. “I’m so happy to be engaged and look forward to a life of happiness with Liam,” said Cyrus of becoming engaged to Hemsworth.

But the challenges weren’t over for Cyrus and Hemsworth as rumors abound when Cyrus was spotted without her ring.

It was later confirmed that the couple had called off their engagement shortly before Cyrus unfollowed Hemsworth on Twitter.

“I don’t think I realized what 19 truly is, and I got engaged at 19, and I definitely wouldn’t change being engaged. It was so fun wearing a fat rock for a few years,” said Cyrus in an interview with Barbara Walters in December of 2013. “But now, I just feel like I can actually be happy.”

For a short while, the couple had a hiatus, Cyrus being seen with Patrick Schwarzenegger and model Stella Maxwell while Hemsworth adopted a rescue dog and generally laid low.

However, time nor the challenges of dealing with heavy media attention couldn’t keep the two apart, as in January of 2016 the couple was spotted together once again at a music festival in Australia and later Cyrus was spotted wearing her old engagement ring. It was officially back on and the two looked more in love than ever before.

Cyrus’s and Hemsworth’s relationship has been fraught with drama and challenges, perhaps far more than the average relationship because of the intensity of paparazzi and general tabloid attention.

But despite it all, they found a way to make it work.

“Of course it was hard, man. But at the time we were going in different directions, and it’s just what needed to happen,” said Liam speaking on the challenges of the two’s relationship and calling off their engagement in an interview with GQ in 2017. “We were both super young, and it was a good decision at the time — we both needed that.”

Throughout that year, the couple is seen spending lots of time together, Hemsworth even dropping in on Cyrus during a skit while she hosted SNL, and spending Christmas with one another. However, they became increasingly more low-key as the year went on, choosing to focus on their love and keeping the tabloids out of it.

The couple didn’t stop being hit with tabloid rumors, as rumors were fueled again — then later put to rest — when Miley deleted her Instagram that year, but they had clearly matured and become stronger as a couple and wouldn’t let it define their relationship.

Then, in November of 2018, the unthinkable happened: the couple’s Malibu home was burned down in the deadly California wildfires. But instead of letting it get them down, they once again used it as an opportunity to show the resolve of their love.

“He was so incredible. He got all the animals out in his truck. He put two pigs in crates, which I tell you is so hard,” said Cyrus in an interview with Howard Stern on Liam saving their animals before the fire. “He got a lot of action for saving the animals…We had to make sure he knew I was very, very grateful.”

Later that month, the couple also go on to donate $500,000 to the wildfire relief efforts.

Relationships are tough no matter who you are. But when you have tabloids and paparazzi breathing down your neck and the insane lifestyle that many stars live in contrast to the average person, maintaining a long-term relationship becomes far more difficult.

Despite this, Miley and Liam have managed to not only stick together for nearly ten years, unheard of not just for a couple in Hollywood but especially for a couple as young as they are, but seemingly become stronger over time.

Just as the fire that threatened to upend their Malibu lifestyle didn’t stop their happiness, they didn’t let their challenges hold them back either.

They could have responded with cynicism and negativity. Instead, they chose love.

Miley herself said in an interview on the SiriusXM show Hits 1 in Hollywood that she herself had some growing up to do and that the time apart helped make them stronger.

“People that break up and get back together, I think that’s awesome because you know it’s true,” she said. “But also you get time to be yourself. You get time to grow up.”

“One thing I’ve learned about marriage from my parents: Nothing and no one stays the same,” said Cyrus in an interview with Cosmopolitan. “Grow, evolve, change with each other and celebrate your love’s journey!”

And in December of 2018, they capped off a whirlwind romance with a surprise ceremony in Nashville where the two were finally wed among friends and family.

“It’s all wonderful and I feel very lucky to be with her,” said Hemsworth in an interview with Extra while at the G’Day USA Los Angeles Gala in Culver City, California.

While accepting the Excellence in Film award at the event, Hemsworth thanked Cyrus. “Thank you to my beautiful wife,” said Hemsworth as Cyrus looked on. “You’re a sweet, sweet angel.”