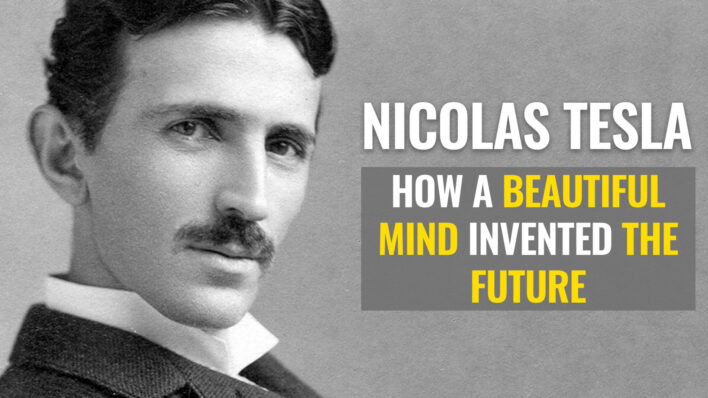 Nikola Tesla left the world at the age of 86 with more than 300 patents under his belt. Some of them included creations such as wireless power, the radio, X-ray, remote control, electric motor, the rotating magnetic field, neon lamp, and much more, which makes him one of the greatest inventors of all times.

RELATED: 25 Nikola Tesla Quotes to Become the Inventor of Your Dreams

His life story is by no means an ordinary one, and below you’re going to read about his most important events and turning points. From being a boy different than anyone else and being fascinated by electricity, to having his biggest rival in the face of Thomas Edison and getting his ideas stolen, let’s dive into the life of Nikola Tesla.

Nikola Tesla’ Life and Career Began With a Storm

Born on July 10, 1856, in Smiljan, Croatia, Nikola Tesla was the fourth of five children of a priest and an inventor. What marked the birth of the Serbian-American boy was a lightning storm.

Nikola Tesla attended primary school in his hometown and was introduced to subjects such as arithmetic and religion. A few years later, the family moved to a city nearby. His real education and the formation of his interests, however, began when he started high school in Karlovac.

RELATED: The 7 Weirdest Facts About Elon Musk – Is He The IRL Tony Stark?

As shared in his writings later in life, his fascination with electricity was born there, after he had the chance to see some demonstrations by his physics teacher. This seemed like magic to him and he wanted to know more about the power of electricity and how it worked. He graduated a year earlier before it was time to attend university.

“I cannot exaggerate the effect of this marvelous sight on my childish imagination. Day after day I asked myself what is electricity and found no answer. Eighty years have gone by since and I still ask the same question, unable to answer it.”

Another thing that made the boy special was his photographic memory. He could memorize books, images, and even 3D structures.

Nikola Tesla: In the Face of death

Nikola Tesla returned to his place of birth, Smiljan, and right after that – while still a teenager – he contracted cholera. He was bedridden for 9 months and almost died.

After surviving, he was in need of a change and some spiritual growth, so instead of joining the army, he ran away to explore the mountains in his country and read a lot of books. According to him, this experience helped him recover completely, both physically and emotionally.

The Technical University of Graz marked the next stage of his life. By diving deeper into math and physics and even philosophy, his love for electricity grew. He was one of the best students, never missing a lecture and passing all his exams. He was so hard-working that his lack of rest made his professors worried and one even sent a letter to his father to warn him that Tesla’s never-ending studying might lead to burnout.

In 1879 his father passed away, and that affected Nikola Tesla more than anything else before. He stopped putting any effort into school-related activities, and instead of focusing on education, he chose gambling. That led to losing big amounts of money, including his tuition fee, and – ultimately – never graduating.

Why Tesla Immigrated to the US and Met Edison

His first job was in Budapest, where he worked as an electrical engineer. The telephone company wasn’t doing well back then, but was about to change a few months later. Nikola Tesla contributed to the business in many ways and helped the company evolve.

It is believed that at that time while walking in the park, the idea of the AC motor was born. In 1882, he moved to Paris and started working for the Continental Edison Company. During one of his sleepless nights of sweat, he had the chance to see Edison for the first time. Two years after that he moved to the States as his manager wanted Tesla with him there working at the Machine Works.

He worked in New York for around a year and Edison was impressed with the ideas and inventions of the young man, but at the same time openly shared his belief that they were “utterly impractical.”

After being offered a fortune to improve Edison’s DC — and after getting the job done only to find out the famous investor was joking about actually paying that much — Nikola Tesla quit and never looked back.

Nikola Tesla and The War of the Currents

Tesla Electric Company was formed thanks to the financial support of 2 men Nikola Tesla met, who had experience not just in running companies, but also knowing how to advertise inventions and get their investments back. The first laboratory of the inventor was opened right there in Manhattan, where he just recently worked in Edison’s headquarters.

The rivalry between Edison and Tesla existed for years, though, and even became known as “The War of the Currents”. Tesla eventually won the war and helped bring electricity to the US. That happened as a result of his collaboration with George Westinghouse, an industrialist and inventor who noticed the brilliant mind of Tesla after reading one of his papers.

Tesla on Business and Relationships

Years later Nikola Tesla demonstrated radio transmission, but his laboratory was destroyed after a fire — while he was preparing the first real radio signal.

Guglielmo Marconi, an inventor and electrical engineer from Italy, took his idea and used the same technology. The invention of the radio was credited to him. Not just that, but he also won a Nobel Prize for it in 1909. What upset Tesla even more was that the whole project was sponsored by Thomas Edison.

That turned into a court battle. Unfortunately, the truth came just after the death of Nikola Tesla when the US Supreme Court admitted the patent for the radio was originally Tesla’s idea.

Tesla never married. He had another affection, though. That for pigeons. He fed them all the time during his walks in the park.

There was one pigeon in particular that he considered special, and even said he loved him as a man loves a woman.

As unusual as Nikola Tesla was, we can’t deny all the wisdom, purpose and will that make his life story what it is.

He once worked for 84 hours straight, without sleeping. That’s how passionate he was about the work he was doing. He spoke 8 languages and left the world with more than 300 patents. He admits he never cared about money, the laws of physics were his religion instead. The great inventor believes in doing our best in order to create a better future.