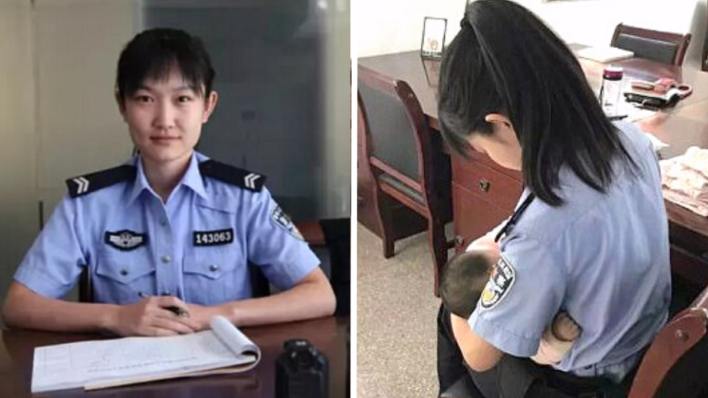 One policewoman in China went above and beyond for a suspect’s distressed baby while the mother stood in trial.
By Sophie Babinski    January 27, 2022

One policewoman in China went above and beyond for a suspect’s distressed baby while the mother stood in trial.

Police officers sometimes have a bad reputation, but there are times when they go above and beyond to protect their community. This is what happened when an officer saw a young baby suffering while its mother was away on trial.

Officer Hao Lina, who had recently given birth and was mother herself to a young baby, saw that the four-month-old baby of a suspect was in distress. The baby, visibly hungry, was in police custody at the Shanxi Jinzhong Intermediate People’s Court in central China while its mother stood trial.

Without knowing whether the baby could eat formula, the policewoman decided to take matters into her own hands. She sent word to the baby’s mother- who was charged with fraudulent fundraising, illegally absorbing public deposit, and crime concealment- and requested permission to breastfeed her baby. Amazingly, the suspect agreed.

I am a new mother, I could feel how anxious the child’s mother would have been. All I thought about was to try my best and comfort the tiny baby.

Once she was granted permission, Hao Lina took the baby into a corner and calmly breastfed it. When she was finally able to leave the court, the baby’s mother cried with gratitude when she saw that her baby was happy and satisfied.

The tender moment was captured on picture and video by some colleagues, and was posted to social media where it went viral. Commenters couldn’t help but appreciate Hao Lina’s selfless act, and commended her for it.

I believe every police officer would do the same. If I had been the mother, I would have hoped someone would help my baby too.

It is important to remember that a mother’s love is unconditional. Mothers across the world share a bond, and they all have the same goal: To keep their children safe, loved, and of course, fed!