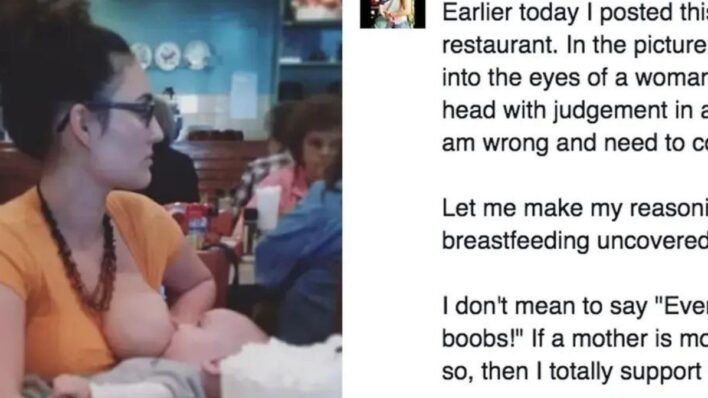 Woman Gets Shamed For Breastfeeding Son In Public, Thousands Of People Stand Up For Her

It is not uncommon for a natural activity to be turned into a social taboo. In many ways, the female
By Arielle London    July 19, 2021

It is not uncommon for a natural activity to be turned into a social taboo. In many ways, the female body is particularly laden with rules and regulations attempting to control our life experiences. Often we must oblige, or we are viewed as “divergent,” “rebellious,” or even “disobedient.”

Well, one woman had just about enough of the breastfeeding shaming from both a specific woman, and society, so she decided to do something about it.

Ashley Kaidel was enjoying a meal at a restaurant when her baby starting showing signs of hunger. So, Ashley began to breastfeed her child at the table, but another woman began to shame Kaidel with her eyes, darting looks of disgust.

In the moment, faced with the decision to either feed her son or make the other woman more comfortable by covering up or stopping, Ashley chose the former. Not only did she choose to continue feeding her child as is, but she faced her shamer head on, and took a photo of the moment.

Ashley Kaidel then posted the photo to Facebook, garnering over 400,000 likes and 120,000 shares on the photo alone.

“In the picture, it appears I’m staring off into the distance. In reality, I’m staring into the eyes of a woman staring at me. She is looking at me with disgust and shaking her head with judgement in an attempt to shame me and indirectly tell me without words that I am wrong and need to cover myself.”

Kaidel continues saying in her post, “With that being said, the reason I post these types of pictures is for the mother that tried breastfeeding uncovered once and she got shamed, she got stared and pointed at, she got nasty comments, she got asked to leave the room, she got asked to cover up.”

Ashley is trying to reduce the stigma around breastfeeding. She says, “I do this for the person that has the mentality ‘Boobs are to be covered. They’re for your husbands eyes only. They’re intimate. It’s a personal/private thing to feed your baby. Cover up out of respect. My kids don’t need to see that. Walk out of the room’ and any other derogatory, close-minded comments and sentiments alike.”

“Breasts were made to sustain your baby’s life before they were made to bring pleasure to any other man, woman, partner or spouse. Their sole purpose is to make food and dispense it straight into a baby’s mouth. There is nothing weird about this and there’s no difference in me feeding my baby with my breast than you feeding yourself with a spoon.”

Kaidel continues saying, “No person should be isolated and shunned because they’re eating, especially when you yourself are eating while ridiculing how someone else is eating. Is it not certainly easier to avert your eyes from a displeasing sight rather than suggest or demand a mother and child remove themselves from your presence? How pompous and selfish is this? Just look away. It’s simple to do so. No harm done at all.”

Defiance for all mothers

Ashley Kaidel raises points that could have been heard in a sexual education class or a related seminar. In challenging the lack of social acceptance of breastfeeding in public spaces, Ashley is standing up for new mothers everywhere, and their children.

One person standing up for a principle or cause can change the entire status quo surrounding that issue. We all have the power to prevent an outdated mentality from affecting our actions and behaviors. When we rise above what society expects us to do and do what we believe is right, often we can find a lot of people standing in our corner to support us.