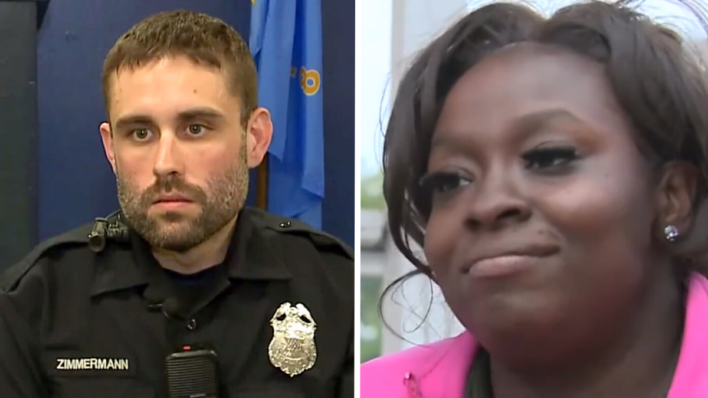 These numbers are staggering, yet many parents still don’t have their children properly restrained in their cars for a number of reasons, the most urgent of which is an inability to afford a proper car seat. One young mother who couldn’t afford car seats for her children was given an amazing gift by a local police officer.

Officer Kevin Zimmermann was doing his usual weekend patrol when he noticed that a car had the wrong registration. He asked the car to pull over and found a mother behind the wheel with her three children in the backseat. Two of the children were very young and Zimmermann saw that none of them were restrained or even had seatbelts on. Worried, he asked the mother, Andrella Jackson, what was going on.

She explained that she was going through some financial hardships and only had enough money to either buy the children car seats, or give them clothes and boots to keep them warm for the winter. She recently also bought a new car, and was unable to pay the cost of registration. To Zimmermann, a father of three himself, the situation was heartbreaking. Instead of giving Andrella a citation, he decided to give her a helping hand.

I’m a father myself, I have three kids. I thought of my kids jumping around. What if a car hit them and they flew and got seriously hurt, if not killed?

Officer Zimmermann took Andrella Jackson’s contact information and went about his shift. Once he was off duty, he contacted Jackson to get her children’s weight so that he could buy them the appropriate seating. He bought two car seats with money out of his own pocket and proceeded to show up to Jackson’s home to install the seats himself.

Now, I’m able to finish getting coats. That saved me 70 something dollars on buying coats and hats and gloves. He’s awesome. I really love him. I really appreciate everything he did for me.

Officer Zimmermann’s generosity and quick thinking did more than just help a woman save a few dollars. He protected her children and took a huge emotional burden off of her shoulders.

Sometimes, performing acts of service can show people how much we really value them. For example, the gift of a prepared meal for a new mother is more than just a meal, it is a few extra minutes of much needed sleep, or a chance for a refreshing shower. Never underestimate the power of an act of service.