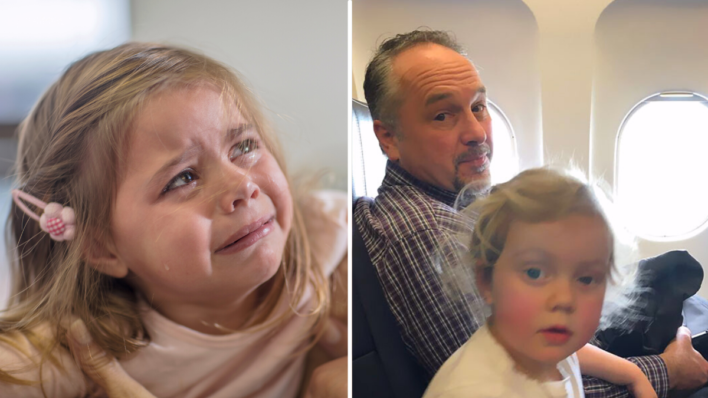 An overwhelmed mom traveling with a toddler and an infant gets support from an unexpected source.
By Sophie Babinski    July 12, 2022

An overwhelmed mom traveling with a toddler and an infant gets support from an unexpected source.

Traveling with babies and children is probably one of the most stressful things one can do. Dirty looks and whispers from fellow passengers seem inevitable, and help is limited to early boarding and some aid from the in-flight crew.

Even when two parents are wrangling one fussy child, the situation can be extremely difficult. A single parent with two children was at her limit traveling from Missouri to North Carolina when she got some surprise help that made her travel experience much more manageable.

How A Passenger Stepped In To Help A Stressed Mother

Jessica Rudeen, 34, from Arkansas was traveling alone with her three-year-old daughter Caroline and her infant son Alexander, who was only four months old. Jessica was traveling by plane from Missouri to North Carolina to visit her mother, and the children were having a difficult time staying calm on the long trip.

On top of having to keep her little ones quiet and entertained, Jessica was nervous about flying, which added to her stress. Luckily fellow passenger Todd Walker, 52, stepped in to help.

I had the crying baby in one hand and I was crouched down next to [Caroline]. Todd reached down and said, ‘I’ll hold him.’ I didn’t know what else to do, it was kind of my only option. I got Caroline down in the seat and she was kicking the seat, screaming and saying she wanted to get off the plane.

Why A Passenger Entertained A Stranger’s Kids On A Flight

Walker told Jessica that he would hold her son while she worked to calm her agitated toddler, who was seated in the middle seat between her mother and Todd Walker. When Jessica had finally settled her daughter down, she saw that Caroline was engaging Todd in conversation. Todd chatted back, and went so far as to color with the little girl and keep her entertained throughout the entire flight.

RELATED: Passengers Stunned When Stranger Goes Above And Beyond For Terrified Senior On Flight

Once they landed, Jessica and her family stuck close to Todd, who helped the mom of two with her bags. Then, he changed seats on their connecting flight so that he could continue giving her a hand. Jessica and Todd had a chance to exchange some information, and he told that he was traveling for business, and he was a father of two boys who were now grown up. He reassured Jessica that he and his wife had been in her position — traveling with little ones is never easy!

It was really sweet to watch. She was very chatty with him. She loved hanging out with him. [When we landed] Caroline wanted to walk with him so she had her bag and she held his hand on the way to the next flight.

How A Stranger Proved The Importance Of Lending A Hand

Because Todd Walker had only told Jessica his first name during their travels, she didn’t know how to reach him to properly thank him once she had successfully reached her mother’s house. Jessica wrote a Facebook post detailing the story and thanking Walker, whose help had made her feel understood and supported instead of like a nuisance.

The post went viral and eventually reached Todd’s wife, Stacey Walker. The two women were able to connect on the phone, where Stacey explained to Jessica that the Walker couple had experienced similar stressful travels in their earlier parenting years, and had also benefited greatly from the kindness and help of the strangers around them.

Stacey explained that Todd had just been paying it forward, helping out as he had been helped all those years ago. It was a bonus that he actually enjoyed spending the flight connecting with the cute little girl.

“It’s in my husband’s nature to help people. We don’t have girls and he really connected with little Caroline. He’s really humbled by it. He can’t believe the amount of attention, it’s just amazing,” she added.