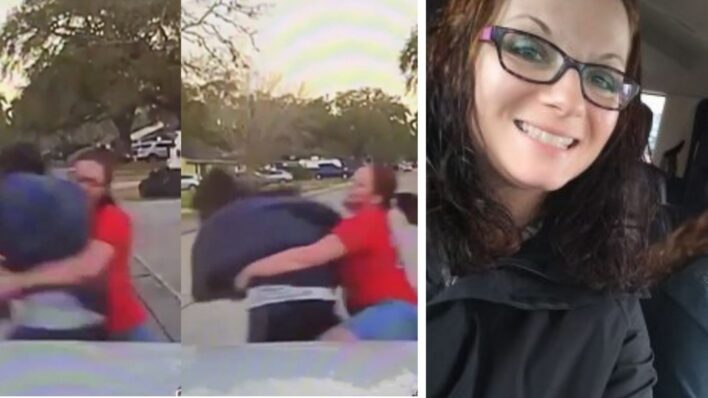 One woman’s motherly instincts stopped a peeping pervert in his tracks.

Phyllis Pena of Lake Jackson, Texas, was returning home from some early-morning errands when she made a sickening discovery: A man was peering right into her daughter’s bedroom window.

She immediately contacted the police as the man fled through the neighborhood.

Police eventually caught up with the suspect, only to have him take off again. Little did he know, he was about to meet his end.

Unfortunately for the suspect, he was running right back towards Pena.

“In a moment’s reaction I’m like ‘he’s coming my way, he’s coming this way!”

The police dashcam captured every moment of the encounter.

In the video, Pena is consoling her daughter when something grabs her attention. She darts down her front lawn towards the sidewalk.

Moments later, a lanky, hooded figure is caught dashing across the screen. Quickly, Pena wraps him up in her open arms and tackles him to the pavement.

‘She did a good job, she was willing to step in, and put herself in harm’s way and held him until officers can take him into custody.”

“My kids are my life, and I’m just making sure I protect them”

We often read about the primal protectiveness that mothers in the wild have over their young.

Good luck if you take a stroll around the block and find yourself between a mother and her cubs. Just like Pena, they will stop at nothing to keep them safe.