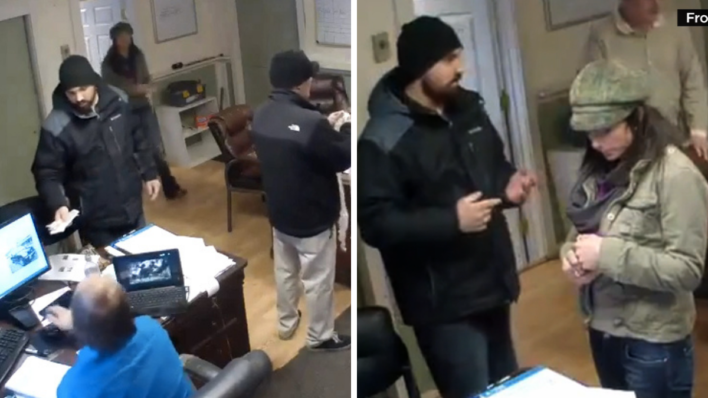 A feud between a car dealership and a pizza delivery guy sparked the ire of the internet, leading to an
By Joel Balsam    September 14, 2021

A feud between a car dealership and a pizza delivery guy sparked the ire of the internet, leading to an outpouring of support for one and an onslaught of negative reviews for the other.

Staff at a Massachusetts car dealership ordered pizzas and drinks totaling just above $42. They handed the delivery driver $50 and he took off with about a $7 tip.

That would have been a very normal pizza delivery for the Palace Pizza driver. But the story doesn’t end there.

Upset that the driver took the money without allegedly asking if the extra $7 was the tip, a staff member at the dealership called Palace Pizza to complain.

In a video shared by CNN, we can see the driver, Jarrid Tansey, return to give the tip back to the disgruntled dealership employee.

“It just doesn’t make sense why you’d hand me a bill that you were just gonna have me drive back here to give you back anyway,” he said.

Even after the driver came back with the customer’s change, the dealership staff continued to hassle him. They contested that they should have gotten the correct change in the first place.

“I gave you everything they gave me so we would get the correct change,” one said.

“I’m not mad, I just had to waste my resources coming back here,” Tansey replied before starting to leave.

The dealership staff continued to dig in: “The manager apologized once for you, do you want him to apologize again for you?”“

Tansey responded, “You got your $7 back, so the world is right now.”

Then, a female employee in a hat proceeds to humiliate the driver.

The video ends with a colleague at the dealership saying he wants to get the pizza place’s “owner and manager” on the phone.

Strangers tipped the driver over $30,000

Somehow surveillance video of the feud was leaked online and Amanda Rogers, a former waitress, was moved by it. She called up the dealership to get the driver’s name and decided to do a GoFundMe fundraiser for a bigger tip.

“Why not get the kid more than he deserves?” she told CNN.

Tips started pouring in, many in $7 increments. Since the GoFundMe was started in 2015, tips for Tansey have grown to an astonishing $31,687 at the time of writing.

Meanwhile, the dealership, F&R Auto Sales, received a barrage of angry negative reviews, leading the business to fire the woman who threatened the driver and eventually go out of business. Apparently, the dealership won’t be missed, as in 2018, its owner was ruled to pay $450,000 in restitution and penalties to resolve allegations that the dealership sold unsafe and defective used vehicles, according to The Herald News.

In a 2016 interview WBSM, Tansey said he’s moved on with his life and was saving the money for a house and for his kids to go to college.

Clearly, justice was served on this day, but this story is also a reminder of all the flak delivery drivers must go through on a day-to-day basis. If you can’t tip a fair amount, don’t order food. Hopefully, this delivery driver’s uplifting story will teach many others that simple lesson.