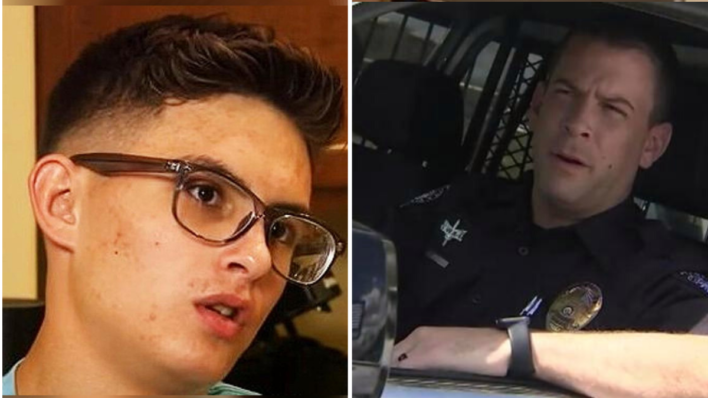 Police Officer Feels Uneasy After Talking to Teen Running on the Street – Weeks Later, He Receives a Surprising Call

All it takes is one caring person to change a young man’s future.
By Lindsey Staub    August 12, 2022

All it takes is one caring person to change a young man’s future.

One night in September 2014, everything changed. After seeing some suspicious activity, one patrol officer decided to investigate further.

Officer Brandon Sheffert was on a routine patrol when he spotted a teen running down the street.

“We were just driving around patrolling, and we noticed this kid who was sprinting down 85th Avenue,” Sheffert told the local FOX 10 news station. “We were kinda like, ‘This is odd. Nobody sprints like that, so let’s stop this kid.’”

Sheffert, who now works as a spokesman for the police department in Peoria, Arizona, stopped the boy to question him. That’s how he found out the kid was 16-year-old Anthony Schultz who was out for a jog.

Schultz told Sheffert that everything was fine, but Sheffert was suspicious that there was more to the story.

Sheffert let Schultz proceed that night but made a point to drive past his apartment complex regularly to check in on him.

Eventually, the two became friends and Sheffert got to learn more about Shultz’s situation; the teen lived in a one-bedroom apartment with seven of his family members.

“It got to a point one night where I get a phone call,” Sheffert told FOX 10. “You need to come take him. I can’t take him anymore. I was like, ‘Whoa, whoa, whoa. That doesn’t make sense.’”

Sheffert realized that more than anything, Schultz needed a stable home life. His wife and he invited the now 17-year-old to live with them for a few days. “This kid just keeping getting hit over and over with things that no kid should have to go through,” said Sheffert.

As Schultz spent more time at the Sheffert home, the Shefferts realized how nice it was for both sides to have the boy there. When Schultz turned 18, he became a legal adult, but the Shefferts believed he was still too young to be left on his own. There was only one thing to do: Offer him to stay long-term.

“We have taken him in as one of our own,” Sheffert said. “Even my kids say he’s their big brother, and they love it.”

How One Police Officer Proved the Importance of Compassion

Schultz believed that if it weren’t for Sheffert stopping him that one night in 2014, he would have ended up in jail.

Instead of being behind bars, Schultz became the first person in his family to graduate on time in the last 30 years.

Due to Sheffert’s compassion and Schultz’s own resilience, in 2017, Schultz officially became a high school graduate.

“He taught me skills. He’s the reason I’ve gotten my first few jobs. He’s given me the ability to look forward into the Army and pick careers that I could do. He’s taught me everything I need to know. Stuff I didn’t know before,” Schultz said.

There’s no way to know where Schultz would have ended up without Sheffert’s intervention. And thankfully, Schultz never has to find out. The teenager had found someone to look out for him, allowing him to reach goals previously unimaginable. Sheffert’s altruism and Schultz’s strength not only made or a beautiful friendship, but changed two lives for the better.

LEAD WITH COMPASSION
Take the time to reach out and get to know someone, it may change their life forever.
Tags
Share
← Prev Post Next Post →