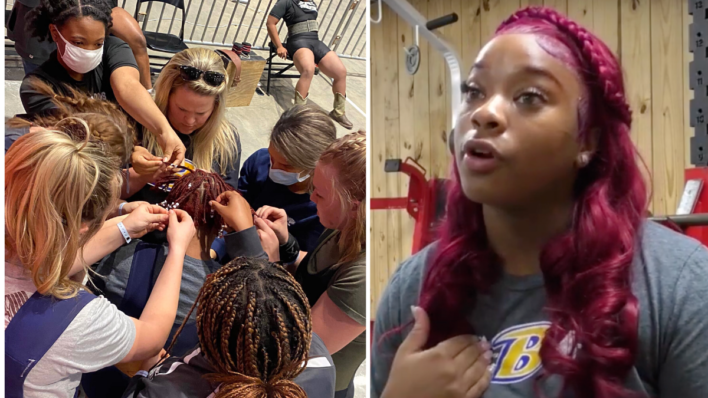 Diamond Campbell was almost disqualified from the state championship for this rule shift.
By Amber Dowling    September 11, 2022

Diamond Campbell was almost disqualified from the state championship for this rule shift.

Many believe sports are essential for youth as they teach teamwork, determination, perseverance, responsibility, and sportsmanship. All sports have rules to help foster those goals and create a safe atmosphere. But sometimes rules change for senseless reasons, as one high school student found out earlier this year.

Why One Teen Was Asked to Remove Beads From Her Hair

Last April, Bruce High School powerlifter Diamond Campbell showed up at the state championship in Mississippi ready to roll. However, before she could do her first lift, the head judge came over to her and revealed the beads in her hair were against the rules.

“I was a little angry. I [felt] shame a little bit, I [felt] humiliated like I was being picked on in a way,” Campbell told an NBC News outlet. “The head judge came up, and she said, ‘She can’t wear the beads,’ and they were like, ‘You got to take them out, you can’t lift, they’re gonna disqualify you, they’re taking your first lift away,’” she continued.

RELATED: Devoted Husband Surprises Stepdaughter By Proving He Is Here To Stay

Although it’s standard to prevent lifters from wearing particular headgear, an itemized list was recently added to include things like bandanas, beads, and hair clips.

“Clips, the beads, that’s in our culture,” Campbell added. “When they wrote the rules, they weren’t writing it for white people or other races. They were writing it for my people.”

The Viral Video That Captured a Heartwarming Moment

Campbell had worked hard to get where she was and had already lost her first lift, so she was determined not to miss another one. She, her teammates, and her coaches began frantically removing the beads. Then, in a viral moment captured on video, something amazing happened.

Girls from the competing schools rushed over and started helping Campbell take her beads out in time for her next lift. “Before I knew it, I had like eight different girls in my head, and they were all taking them out,” Campbell recalled.

“We were just trying to give her an opportunity to still compete because it’s not fair to her to not have that opportunity because of something so small,” added competitor Jorja Roberson to the outlet.

According to Campbell, having those girls in her corner helping her was the motivational push she needed. Despite already being down a lift, the teen recorded a personal best in the deadlift category and finished fourth in her weight class.

“They could have easily let me sit there and have to do it by myself and probably miss my next lift because there were a lot of beads. But they put everything aside, and they helped me,” she added.

That moment didn’t only help Campbell in the competition, however. Because all the girls pitched in and because the video went viral, the rules caught many people’s attention — including the attention of prominent civil rights attorney Benjamin Crump, who shared the video on Twitter.

RELATED: Man Sees Boy Living In a Garbage Dump And Is So Moved He Surprises Him With a Home

“This was awful to witness and must have been humiliating for the young girl,” he wrote. “We must continue the fight to BAN biased hair discrimination everywhere!”

Later, the Head Director of the Mississippi High School Activities Association, Rickey Neaves, revealed the rules are being revised. He also confirmed beads would no longer be banned in the 2022-23 season.

How Strangers at a Competition Proved the Importance of Community

While it’s awful to think about how Campbell must have felt at that moment, her story shows us the importance of coming together and fighting for what’s right. Not only did her teammates and competitors do what they could to ensure Campbell would be able to participate in the competition, but they also shared a video showing the power of community to inspire change.

It’s a reminder for all of us to speak up when we see something that isn’t right and to jump in and support people when they need an extra hand. But it’s also a reminder that we should all question pre-existing rules and regulations and ask who they’re intended for and why.

It only takes one strong showcase of community to make a difference… and, in the case of Campbell, to achieve a personal best.