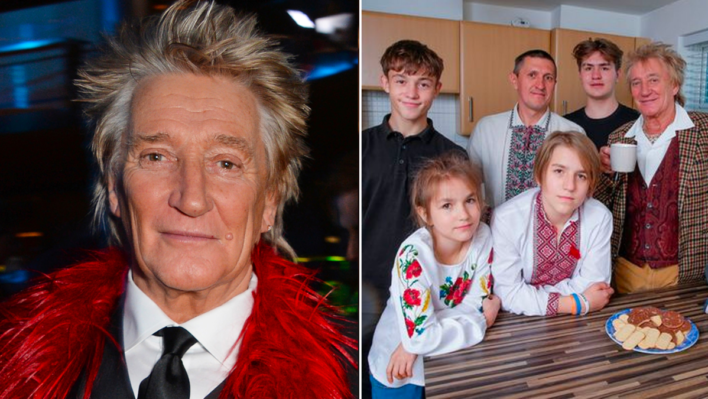 The “knight in shining armor” provides the family with a house and plans on paying both the rent and the bills for at least a year.
By Heidi Hamm    December 10, 2022

The “knight in shining armor” provides the family with a house and plans on paying both the rent and the bills for at least a year.

For months the world has watched in horror as Russia continues its relentless onslaught on Ukraine. Millions of people have lost the life they once knew; fleeing their homeland in search of peace.

They have left everything behind — their homes, their livelihoods, cherished family and friends — to become strangers in a foreign land, including a Ukrainian family of 7 who has been rescued by a real-life knight (minus the shining armor).

Husband and wife Rostyslav and Olena and their children, Tars (17), Kostya (16), Roman (13), Mariia (10), and Dymtro (2) abandoned their home in war-torn Ukraine for a new life in the UK. After a perilous journey across the border, they finally arrived. However, they arrived with nothing. No money, unable to speak the language, and nowhere to live.

That is until Sir Rod Stewart and his wife Penny learned of their plight and stepped up to give them a much-needed helping hand.

Upon hearing the Kurtiak’s story, the couple immediately got to work to put a roof over their heads. They rented a three-story, four-bedroom townhouse in Berkshire, furnished it, and pledged to cover the rent and all of the family’s bills for at least a year.

Rod Stewart may be their landlord but to the Kurtiaks, he will always be their “hero.”

“Sir Rod is a very great man. He saved my family from danger,” Rostyslav told MailOnline. “Now my children are safe and are learning in school like normal children.”

They’re also becoming die-hard Rod Stewart fans. Rostyslav plays his music “round the clock.” He admits he liked his music before but now he’s his “biggest fan.”

Why the Singer and His Wife Decided to Take Action

Like millions of other people worldwide, Rod Stewart and Penny watched the tragedy of the Ukraine-Russia conflict unfold on national television.

“Words cannot describe what we were watching,” Stewart, a father of 8, told the Daily Mirror. “The bombing of innocent children, the bombing of hospitals and playgrounds. Like everyone else, we were completely beside ourselves. I don’t wish that on anyone. This is evil, pure evil.”

They couldn’t sit back and ignore what was happening. Stewart called his nephew Warren and they hatched a plan to fill three trucks up with supplies and take them to the Ukrainian border. The trucks didn’t return empty. Inside were 16 refugees.

It was just the beginning.

Afterward, Stewart found out about the Kurtiak family and the rest, as they say, is history. Additionally, he provided jobs for two other refugees on his Essex estate, including one as a gardener.

And he doesn’t plan on stopping anytime soon. “It just makes me want to do more. I am thinking of getting another house now and getting a lot more people over,” Stewart said.

The legendary singer is used to keeping mum about his charitable efforts. But when it came to helping the people of Ukraine he felt compelled to say something.

“I usually keep all my charitable efforts nice and quiet and just do it. But I thought, ‘I am a knight, I have been given this knighthood because of the things I’ve achieved in my life and the charity work I’ve done over the years,” he said.

He received his knighthood back in 2016 and feels that he should be using it for good. “I am a knight,” he said. “I should be using my power to do something for people.”

And he hopes that people are watching.

“I am sure that if there are people out there who see what I am doing, they will pick up some slack too,” he said.

We may not all have the financial means to put up a refugee family but we are all capable of doing something.

Since the Russian invasion in Feb. 2022, the UN’s refugee agency reports that over 1.7 million people have become refugees. There are a number of humanitarian aid organizations that are doing everything they can to help. You can help by donating money, resources, or time.

What is happening overseas is heartbreaking and can make even the most positive among us lose our faith in humanity. But it’s good to see that there are still good people out there, doing good work, proving that maybe, just maybe, all hope is not lost.