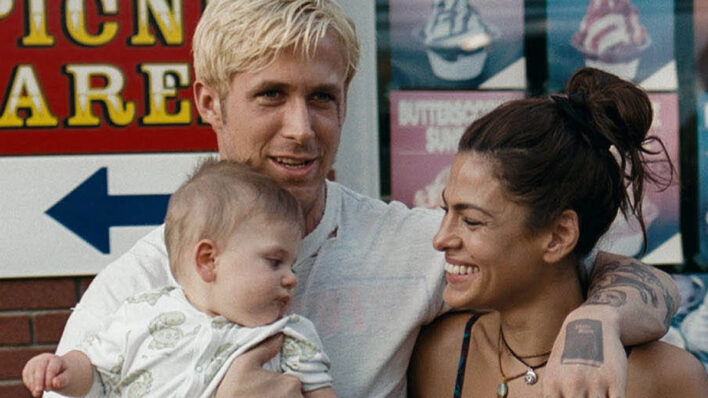 Ryan Gosling’s Happily Ever After Is Better Than ‘The Notebook’

To this day, Ryan Gosling’s most memorable relationship remains his highly publicized romance with his The Notebook costar Rachel McAdams. However, as time has shown, his real happily ever is with Eva Mendes.
By Barbara Pavone    March 13, 2020

To this day, Ryan Gosling’s most memorable relationship remains his highly publicized romance with his The Notebook costar Rachel McAdams. However, as time has shown, his real happily ever is with Eva Mendes.

Ryan Gosling has played some incredibly romantic characters on the big screen, but it’s his real-life relationships that are truly noteworthy. In the mid-2000s, the Canadian actor dated his The Notebook co-star Rachel McAdams and, not surprisingly, fans couldn’t stop comparing them to the picture-perfect couple they saw on-screen.

Throughout it all, Gosling was adamant that their real-life love was much more romantic that the film’s. As he told GQ at the time, “People do Rachel and me a disservice by assuming we were anything like the people in that movie.”

Although the couple split in 2007, they remained good friends and managed to avoid all of the drama that plagues so many splits. So when Gosling met Eva Mendes on the set of The Place Beyond the Pines in 2011, his heart was ready and open to love. Rather than worrying about dating a co-star again or expecting the worst, his positive split from McAdams helped set the tone for his happily ever after.

Here’s what we can learn from Ryan Gosling and Eva Mendes’ relationship:

Ryan Gosling and Eva Mendes show us the power of an instant connection. Soon after The Place Beyond the Pines brought them together, the actors began spending more and more time in each other’s company.

Before the film even hit theaters, they were photographed having the most adorable date at Disneyland. As a source told People in September 2011, “Ryan and Eva have spent a lot of time together on set. They have great chemistry and seem to enjoy filming together. They seem to be good friends and always laugh together.”

The pair wasted no time building a life together — daughter Esmeralda Amada arrived in 2014 and baby sister Amada Lee followed in 2016 — and, by 2020, they were still happily dating. All while managing to keep their private lives more private than any other couple in Hollywood.

There was no doubt

Gosling and Mendes may have fallen in love and settled down rather quickly, but when you’re sure you’ve found your perfect match, why wait?

Gosling clearly had no qualms about their connection, as he revealed in an interview with Hello! Canada back in 2015.

I know that I’m with the person I’m supposed to be with.

Asked what qualities he looks for in the ideal woman, he gave the ultimate romantic answer, saying, “That she’s Eva Mendes. There’s nothing else I’m looking for.”

Your relationship is yours alone

If there is one major lesson Ryan and Eva can teach any couple (not just the famous ones) it’s that privacy is key. Your relationship should be yours alone and sharing it with the world isn’t mandatory. Neither is posting about it on social media, as Mendes told one fan in March 2020.

When said fan joked on one of Eva’s Instagram posts that she “wouldn’t mind an [appearance] by Ryan on this page,” the actress explained exactly why that doesn’t happen often.

“I struggle with social media but I love the constant connection with women,” she began, clarifying, “As far as Ryan, I’ll only post flashbacks of things that are already ‘out there’ (like pics from movies we did or stuff like that). My man and kids are private. That’s important to me so thanks for getting that. Have a beautiful day. Sending so much love!” she concluded.

The couple takes their vow of privacy extremely seriously. So much so that, despite being a couple for nearly a decade, Ryan Gosling and Eva Mendes have only been photographed together on a red carpet once when they attended the 2012 premiere of their film, The Place Beyond The Pines.

Fueling the couple’s dedication to privacy is their devotion to their family. Their love and their two kids come above all else.

Family is such a priority, in fact, that Mendes hit pause on her acting career to become a stay-at-home mom. Speaking with Latina, she admitted it would “definitely take something really special” for her to get back to work. “I don’t like saying ‘take me away,’ but essentially that’s what work does,” she noted.

I think it can be very, very healthy if it’s something that feels worthwhile. Right now I feel very fortunate to be home with my kids. I feel so lucky, and I’m just taking advantage of that.

That wasn’t always the case, however. In another show of proof of just how deep the couple’s bond is, Gosling totally changed Mendes’ outlook on kids. As she told Women’s Health in May 2019, having kids “was the furthest thing from my mind” and then, “Ryan Gosling happened. I mean, falling in love with him. Then it made sense for me to have […] not kids, but his kids. It was very specific to him.”

In March 2020, Mendes offered a rare glimpse into the couple’s private life, revealing that family time is always a priority. Speaking about Thanksgiving and Christmas, she noted that Gosling’s family regularly visits from Canada and “it’s just a big fun party. It kind of always feels like a holiday because we get together so often,” she added, “but the traditions are pretty basic. It’s just a lot of food, maybe someone gets mad at someone else, maybe someone ends up crying — and definitely ends up making up — and then we’re celebrating.”

Their support is unconditional

While Mendes hit pause on her career to become a full-time mom, Gosling continued to work — a decision they made as a team. And one that was made possible by their unconditional support of one another.

Gosling revealed just how supportive Mendes is when he won Best Actor at the 2017 Golden Globes for his role in La La Land. In his acceptance speech, he revealed, “My lady was raising our daughter, pregnant with our second, and trying to help her brother fight his battle with cancer. If she hadn’t have taken all that on so that I could have this experience, it would surely be someone else up here other than me today,” he said, concluding, “So sweetheart, thank you.”

Thinking back to that moment years later, Mendes told Women’s Health, “It was like a dream. But really, what I heard was that he said my brother’s name. It was the most beautiful gesture, and I had no idea Ryan was going to say it.”

Mendes is also Gosling’s biggest fan when it comes to his other passion: directing. Speaking with Access Daily, she called her partner a “creative genius” and told Extra TV she would absolutely return to work for one director in particular: “Ryan Gosling,” she said.

Gosling actually directed Mendes in his 2015 directorial debut, Lost River, and, according to Mendes, it was wonderful. “My most fun experience was being on set with him when he was directing,” she gushed. “It was really so creatively satisfying being in it together, and he’s such an amazing director. I would love that experience again, for sure.

By choosing to keep their relationship away from prying eyes and making the decision to focus on their growing family, Ryan Gosling and Eva Mendes have shown us the importance of prioritizing love. When you actively make decisions based on what is best for your relationship (even when that means pushing some of the outside world away), you can rest assured those decisions will pay off twofold.