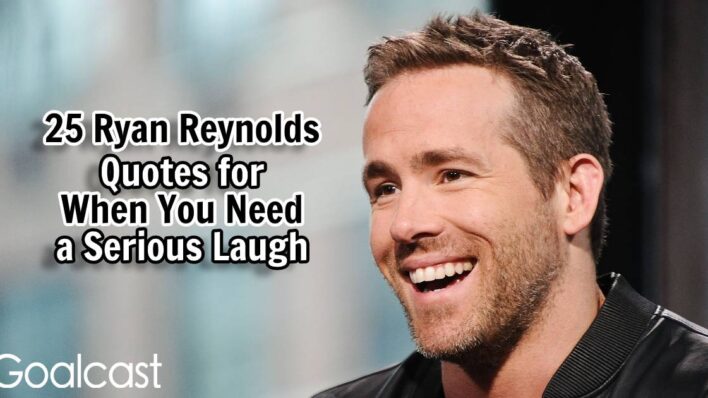 25 Ryan Reynolds Quotes For When You Need a Serious Laugh

Ryan Reynolds is either “too deep” or makes fun of everything. Here are 25 Ryan Reynolds quotes and tweets that are both smart and hilarious.
By Flavia Medrut    January 6, 2020

Ryan Reynolds is either “too deep” or makes fun of everything. Here are 25 Ryan Reynolds quotes and tweets that are both smart and hilarious.

Ryan Reynolds is one of the sexiest men alive and an actor who has starred in movies from comedies (Van Wilder) to dramas (Fireflies in the Garden) and everything in between.

He’s also known as Detective Pikachu and the funniest superhero since X-Men Origins: Wolverine was released; as the saucy Deadpool, he never fails to make people laugh.

But before becoming one of Hollywood’s most beloved actors, Reynolds earned a living just like everyone else, working in warehouses or taking late shifts at a grocery store. The money he was getting as a young actor wasn’t enough to support himself so he needed some extra cash.

He also has an amazing relationship with his wife Blake Lively but when it comes to his children, Ryan is the perfect father. He got so good at changing diapers that now he can even do it while the kids are running.

Reynolds is either “too deep” or makes fun of everything, no matter how serious the topic is. He’s a great entertainer onscreen and on social media, as his fans on Twitter can testify.

I don’t expect success. I prepare for it.

I don’t personally believe that villains exist. Villains are just a way of saying that somebody has an opposing conviction.

Laughing can serve you in dark moments and even help you crawl your way back out.

Sometimes it’s just enough to keep your body moving. I get depressed if I don’t move.

Acting has given me a way to channel my angst. I feel like an overweight, pimply faced kid a lot of the time – and finding a way to access that insecurity, and put it toward something creative is incredibly rewarding. I feel very lucky.

I’m teaching my daughter that the sun goes down each night because it’s mad at her. Probably gonna write a book on parenting at some point.

When you have expectations, you are setting yourself up for disappointment.

I firmly believe that you can’t manufacture chemistry with anyone, let alone a kid.

We might be too proud to admit it as guys, but we still need to learn how to manage responsibility, how to face our challenges.

I’d walk through fire for my daughter. Well not FIRE, because it’s dangerous. But a super humid room. But not too humid, because my hair.

Any kind of crisis can be good. It wakes you up.

I never took acting classes, but I knew I could do it based on the skill with which I lied to my parents on a regular basis.

I think you have to let go of this idea that you can be precious about everything, and let it be the abstract mess that it is.

I used to say to [Blake], ‘I would take a bullet for you. I could never love anything as much as I love you.’ And the second I looked in that baby’s eyes, I knew in that exact moment that if we were ever under attack, I would use my wife as a human shield to protect that baby.

I think every relationship is going to go through a few rough patches. Those are what make it stronger, I think.

I figure if you’re going to jump off a cliff, you might as well fly.

I’m going to admit when I’m clueless, and I’m going to ask people for help when I don’t know the answer to something.

I have a discipline that has served me very well in my career and in my personal life… and that’s gotten stronger as I’ve gotten older. I’ve always felt if I don’t just have a natural knack for it, I will just out-discipline the competition if I have to — work harder than anybody else.

I can’t tell the difference between meditation and silent inner shrieking.

You wake up in the middle of the night, you got a big stupid smile on your face. I was telling someone else that anything else that woke you up every 45 minutes, you’d kill it. But when it’s a baby, it’s the best thing that ever happened to you.

People have their complexities. They have their heroic moments and their villainous moments, too.

I learned discipline from my father. Not in terms of corporal punishment, but being determined in whatever you do, and sticking with it.

There are so few surprises left in life. We’ve gotten so addicted to knowing. It’s the Google generation. We want the answer to everything right now!

I think we can all use a little more patience. I get a little impatient sometimes and I wish I didn’t.