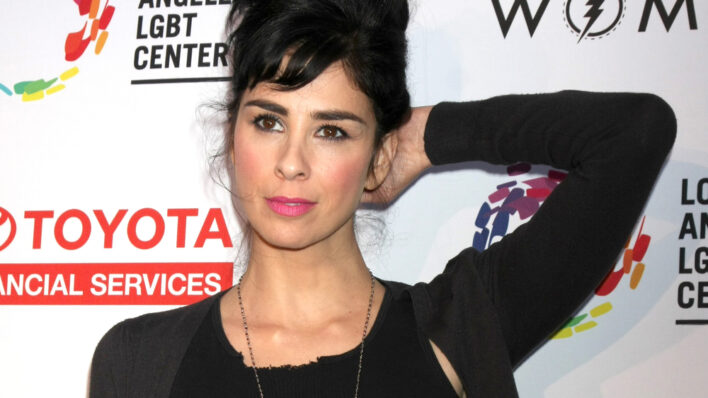 Edgy comedian Sarah Silverman is no stranger to online attacks, vicious comments, trolls and misogyny – her bold brand of
By Eliza Theiss    January 12, 2018

Edgy comedian Sarah Silverman is no stranger to online attacks, vicious comments, trolls and misogyny – her bold brand of comedy and unrepentant feminism has drawn ire and critique from the start of her career. Never one to ignore a challenge or back down from a fight, the celebrity comedian has previously called out hecklers and trolls.

So, when an online troll called her a sexist and vulgar name on Twitter, more than one popcorn bag was opened in anticipation of her sharp retort.

But Silverman’s reply took everybody by surprise, not least the troll himself.

Instead of fighting fire with fire, Silverman responded to the unprovoked attack with kindness, understanding and encouragement – a response that left the troll, Jeremy Jamrozy, reeling with emotion.

I believe in you. I read ur timeline & I see what ur doing & your rage is thinly veiled pain. But u know that. I know this feeling. Ps My back Fucking sux too. see what happens when u choose love. I see it in you.

What followed was a heartfelt exchange of tweets and messages that revealed the mental and physical pain behind Jamrozy’s insult.

A survivor of childhood sexual violence, the 32-year-old San Antonian is struggling with the trauma, depression, as well as severe health and pain issues that prevent him from working. With each and every tweet, the two engaged in an emotional exchange that inspired many.

I can’t choose love. A man that resembles Kevin spacey took that away when I was 8. I can’t find peace if I could find that guy who ripped my body who stripped my innocence I’d kill him. He fucked me up and I’m poor so its hard to get help.

Good. I want to kill him too so I can’t imagine your rage. All I know is this rage- and even if you could kill him— it’s punishing yourself. And you don’t deserve punishment. You deserve support. Go to one of these support groups. You might meet ur best bros there.

I will go. But I trust no one I’ve been burned so many times. I’d give the shirt off my back and everytime I get burned. I’m super antisocial. I have no friends. I’m sorry I gave u shit.

Dood I don’t care. I’m fine. I see something in you. My gut tells me you could have a great life. My shrink says we don’t get what we want, we get what we think we deserve. I’m telling you, you deserve so much more than you know.

Silverman’s appeals for qualified health specialist was soon answered by her followers, and according to local media reports, Jamrozy has already consulted local specialists.

Moreover, as Silverman has offered to cover his treatment’s expenses, the reformed troll will be paying it forward, distributing funds from his GoFundMe campaign to other San Antonians in need.

A bit embarrassed by the glory I’m getting from being human 2 another human. Literally everyone can do this. I do lots-this 1 just got noticed. (I also DONT do it LOTS- often not my best self. It takes PRACTICE) so please, keep ur expectations of me low or I’ll surely disappoint https://t.co/OP1D2CYKmJ

Silverman has since seen an outpouring of praise, although she remains modest about her humanity. She and Jamrozy remain in contact, and both continue to receive messages of support, encouragement, and gratitude for the brave interaction. The heartfelt moment has inspired many to follow Silverman’s example to try and choose love and kindness, even when – or especially when – dealing with negative individuals.

This taught me a lesson. Maybe we should all listen to each other more. I could be better too.

I’m not gonna say this thread has restored my faith in humanity, but it does speak loudly on the merits of cooperation & civility. Thank you, Jeremy & Sarah, and have a better year than the last one. Peace ✌️