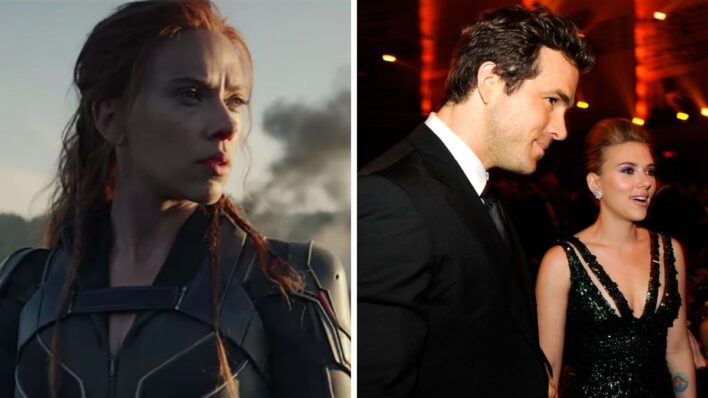 Not many people are aware that Scarlett Johansson was previously married to Ryan Reynolds. Why doesn’t Scarlett share any details of her past?
By Shaoni Das    July 9, 2021

Not many people are aware that Scarlett Johansson was previously married to Ryan Reynolds. Why doesn’t Scarlett share any details of her past?

Hollywood is an island, and everyone is related to each other in some way or the other.

A case in point: Scarlett Johansson and Ryan Reynolds. They’re considered to be two of the most endearing, charming cinematic personalities of our times. Yet, many still don’t know that they’d been married to each other for three years prior to reaching the sensational heights that they revel in today.

Given their monumental fame, there’s a lot of mystique surrounding their marriage and what exactly triggered its dissolution. The intrigue is exacerbated by both Ryan and Scarlett’s persistent refusal to discuss their relationship in public, which subsequently leads to an explosion of speculation and allegations.

With Scarlett and her current husband, Colin Jost, expecting their first baby, it’s a good time to reflect on her doomed romance with Ryan Reynolds and the reason why she’s been keeping mum about her divorce for nearly ten years:

The element uniting their marriage and divorce is the near-religious adherence to privacy. Neither Scarlett nor Ryan were particularly fond of flaunting their love to the rest of the world. They issued a public statement at the time of their engagement in May 2008, and that was mostly it. Over the next few years of marriage, they provided little to no insight into their partnership and only opened up about it in the context of how it affected their personal development.

For example, Scarlett told a magazine in September 2009 that she’d never imagined she’d get married so quickly. “It just happened,” she said, adding that she hopes that a relationship “makes you better” and that it leads to learning new things about you. Though she didn’t name Ryan by name, she said their commitment makes her more confident to “explore things within [herself] that [she] hadn’t thought about in the past.”

By early 2010, the cracks in their marriage were ever so slowly starting to show. Scarlett elaborated on the pitfalls of being with an “in-demand actor.” It’s a herculean task to coordinate their schedules, avoid the paparazzi, and still preserve a steadfast level of desire and affection for each other. “We work and then go home and–I, anyway–just stare at the wall for a few hours before I go to sleep…Like in any profession, it’s difficult,” she said.

We work and then go home and–I, anyway–just stare at the wall for a few hours before I go to sleep…Like in any profession, it’s difficult.

The tabloids started chiming in with rumors of marital strife, which the couple promptly denied. However, it was evident something was not right, and by December 2010, the couple announced their separation, saying that they leave the marriage with as much “love and kindness” as when they decided to tie the knot.

The press, of course, spared no time in psyching out about their divorce and tossing a wide range of theories in the air, none of which were ever confirmed by the individuals in question or even their friends or family. InTouch magazine alleged that they were incompatible to the nth degree, with an insider saying, “He’s more traditional, and she’s more independent.” The same source said that there was a “lack of warmth” between them and that they heard Scarlett screaming at Ryan in his trailer in full force during the filming of The Proposal, essentially “going nuts.”

When it wasn’t a personality clash, it was competitiveness. Some people believe that jealousy over each other’s thriving careers may have widened the gap between the two. This assumption is based on an interview in which Scarlett hints that being romantically involved with an actor, especially one who is your contemporary in many ways, is “hard work.” If one person is more successful than the other, there may be a “competitive thing,” in her words. She said in 2016 that she prefers men who are not in her field; after all, it’s rare to find a man who’s not “only confident in the love that you have for one another, but confident in what he has going on in his own career.”

Ultimately, it’s a futile exercise to pore over why Scarlett and Ryan’s marriage deteriorated. They’re happily in love with other people and are well aware of the struggles they’ve faced through their engagements, marriages, and divorces. They do not need to dignify the claims with their response, and if they do choose to speak out about it, it’ll be on their own terms.

For instance, the Black Widow star commented on marriage with Ryan in an interview with Vanity Fair, saying that she’d only been 23 when she decided to step into this hugely consequential undertaking and that she didn’t have a firm understanding of what the commitment required of her.

I didn’t really have an understanding of marriage. Maybe I kind of romanticized it, I think, in a way. It’s a different part of my life now. I feel like I’m in a place in my life, I feel I’m able to make more active choices.

Scarlett finally clued the public in as to why she continues to be reserved about their marriage — she simply doesn’t feel like it’s anyone’s right to ask if they don’t know the people very well. It’s a matter of questioning your own behaviour in a public setting and asking yourself whether it’s appropriate or necessary to talk about marriage at work, or during a chat show, or with a tabloid.

As one of the most successful actresses on the planet, Scarlett knows a thing or two about maintaining professional and personal boundaries — even when it’s so easy to erupt and unleash your raw emotions. While referring to an interview Ryan did at The Late Show With David Letterman — which involved some unsolicited relationship advice on David’s part — Scarlett not only expressed disappointment at Ryan speaking about their marriage but admonished people who go around offering marital counsel to just about anyone. It’s not their place, and one shouldn’t think of themselves as such an expert.

I would never ask somebody about their marriage if I didn’t know them. I don’t profess to know anything about marriage that anybody else doesn’t know, or how to make it right. I don’t want to read about somebody who’s giving me relationship advice. So I try to keep some things for myself, to have a private life.

It’s not fair to deliberate how their marriage ended if the parties themselves are insistent on retaining their privacy. It’s not just Scarlett, either. Ryan holds up his end of the bargain and deliberately keeps quiet on the ins and outs of his previous relationships. “I’m a little more guarded, I think. I’m just a little bit more wary of having my relationship turning into a soap opera. I’ve unilaterally not addressed it,” he told GQ.

Draw boundaries where you must

Just because Scarlett Johansson and Ryan Reynolds are public figures doesn’t mean we’re entitled to every single tidbit of their domestic life. It’s a boundary they’re intentionally drawing to uphold some type of structure in their lives. Furthermore, divorce is a messy, trying situation where very rarely does one person come out looking better than the other. If you have a minimal amount of respect for the other person, ask yourself whether it’s worth tainting their reputation and the memories you’ve made.

On the contrary, just because we’ve experienced a taxing ordeal ourselves doesn’t mean we’re any more qualified to probe others about the state of their relationship or career. The boundaries don’t just need to be set and defined for our sake; they hold enormous value in the type of friendships and relationships we can pursue with other people.