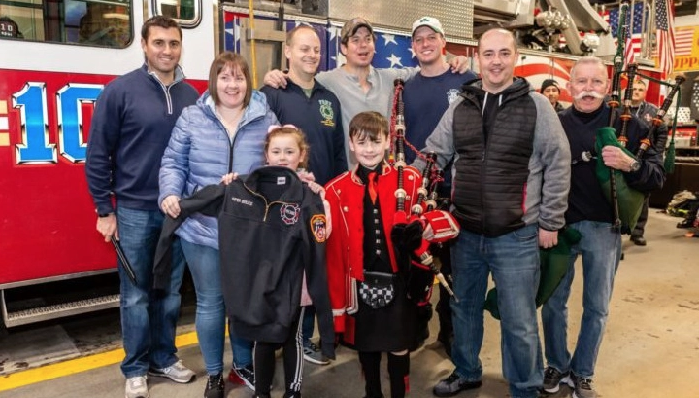 Impossible as it may have seemed, the 10-year-old bagpiper set his goal, and he kept on working to make it happen. Josh started to busk on the streets of his hometown as well as piping in the Aberdeen city center, earning money for his dream NYC trip.

Josh desperately wanted to be involved in the parade, which this year was led by actor Sir Billy Connolly (The Boondock Saints, The Hobbit: The Battle of the Five Armies), who served as Grand Marshal.

And he achieved his goal! This year, Bruce was an honorary member of the Fire Department New York Emerald Society Pipe Band.

The boy has been playing pipes since he was five years old, and has gotten very talented with all his dedicated practice. Josh is used to performing for crowds and enjoys playing tunes ranging from Avicii’s “Wake Me Up” to more traditional ballads.

Even Josh’s instrument of choice is charitable! The 343 Red Hot Chilli Piper Wallace Bagpipes have a beautiful story behind them. Only 343 sets were made – one for each of the firefighters who lost their lives at the World Trade Center on 9/11. A portion of every set sold goes towards the Fallen Firefighter Foundation charity.

It was because of his amazing fundraising (at such a young age, no less), that the boy was ultimately invited to march the procession with the Fire Department New York Emerald Society Pipe Band, alongside 3,000 participants including solo pipers, drummers, full pipe bands, highland dancers, Scottish clans, and even Scottish dogs!

The FDNY even presented Josh with a personalized jacket and made an honorary member of the band.

“I’m over the moon. I was already so excited to be taking part in the New York City Tartan Day Parade and to be made an honorary member of the Fire Department New York Emerald Society Pipe Band is a dream come true. I can’t wait to march with pride alongside the band at tomorrow’s parade,” said Josh Bruce.

The excitement was mutual. “Josh should be commended for his work and commitment to his culture and country. The Fire Department of New York Emerald Society Pipes and Drums are proud to have Josh as an honorary member,” Pipe Major, Jim Lee, said.

The parade was a big deal, with over 30,000 spectators and the 3,000 participants marching from 45th Street to 55th Street up Sixth Avenue. Among that huge crowd was one small boy who achieved his dream through hard work and charitable intentions.