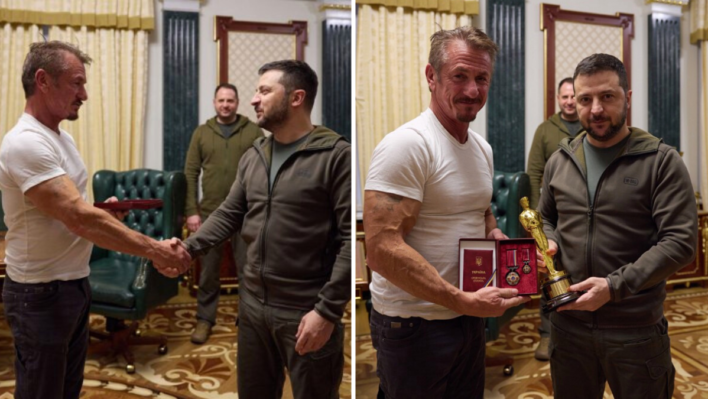 The Hollywood actor-director gave Zelenskyy the statue and told him to hang onto it until they win the war.
By Sophie Tolias    November 16, 2022

The Hollywood actor-director gave Zelenskyy the statue and told him to hang onto it until they win the war.

In a recent visit to Kyiv, actor and director Sean Penn loaned one of his two Oscars to Ukrainian President Volodymyr Zelenskyy and told him: “When you win, bring it back to Malibu.”

The 62-year-old actor-director has been one of Hollywood’s most outspoken supporters of Ukraine during the ongoing conflict with Russia. In February, he was on the ground in Ukraine filming a documentary for Vice Studios, and the actor has met with President Zelenskyy several times since.

“Already a brutal mistake of lives taken and hearts broken, and if he doesn’t relent, I believe Mr. Putin will have made a most horrible mistake for all of humankind,” Penn said in a statement in February. “President Zelenskyy and the Ukrainian people have risen as historic symbols of courage and principle. Ukraine is the tip of the spear for the democratic embrace of dreams. If we allow it to fight alone, our soul as America is lost.”

During Penn’s recent visit with President Zelenskyy, Anton Gerashchenko, advisor to the Minister of Internal Affairs of Ukraine, shared a video of their encounter.

During the visit, Penn surprised President Zelenskyy with one of his Oscars as a symbol of solidarity. “This is for you. It’s just a symbolic silly thing, but if I know this is here then I’ll feel better and strong enough for the fights,” Penn tells Zelenskyy in the video. “When you win, bring it back to Malibu, because I’ll feel much better knowing there’s a piece of me here.”

The actor had previously vowed to smelt his Oscars in public if the Academy of Motion Picture Arts and Sciences did not invite Zelenskyy to speak during the telecast of the 2022 awards ceremony. While the Ukrainian president did not appear at this year’s Oscars, a statement was made during the ceremony expressing support for Ukraine.

At first, Zelenskyy hesitated to keep the statue but then accepted it and told Penn that they “have to win.”

“Sean brought his Oscar statuette as a symbol of faith in the victory of our country,” Zelenskyy wrote on Instagram. “It will be in Ukraine until the end of the war.”

During their meeting, the president presented Penn with the Ukrainian Order of Merit, which is given to citizens for outstanding achievements in economics, science, culture, or military or political activity. Past recipients of the award include Ukrainian academics and writers and Soviet-era military commanders.

“It’s not from me. It’s from Ukraine,” Zelenskyy says as he presents Penn with the award.

The video then shows Penn and Zelenskyy walking around the city and arriving at the Walk of the Brave — a walkway, inaugurated in August, lined with plaques honoring world leaders who have shown solidarity with Ukraine — at Constitution Square, across from the Ukrainian parliament building and presidential palace.

“The first man who was here, was this guy. I think you know him,” Zelenskyy says to Penn while pointing to a square plaque laid in the ground engraved with Penn’s name and the date Feb. 24, 2022, the start of the invasion.

An emotional Penn, thanks the president.

“There are three places in the world, where all the pride of my life will be,” Penn tells Zelenskyy. “The place my daughter was born, the place where my son was born and this. Thank you.”

“We thank you. We thank you very much,” Zelenskyy replies touching his heart.

His documentary is not the only reason Penn has been in Ukraine during the war. When Russia invaded Ukraine, forcing the country into a massive humanitarian crisis, Penn and his crisis response non-profit CORE began working on the ground in Ukraine, Poland and Romania to support those who were fleeing.

Penn has not only made his support for Ukraine clear, but he also shares his admiration of Zelenskyy, once an actor and comedian turned fearless leader.

“I don’t know if he knew that he was born for this, but it was clear I was in the presence of something,” he told Anderson Cooper in an interview on CNN. “And again, I think reflected of so many Ukrainians, that was new to the modern world in terms of courage and dignity, and love that comes out of the man and the way he has unified that country.”