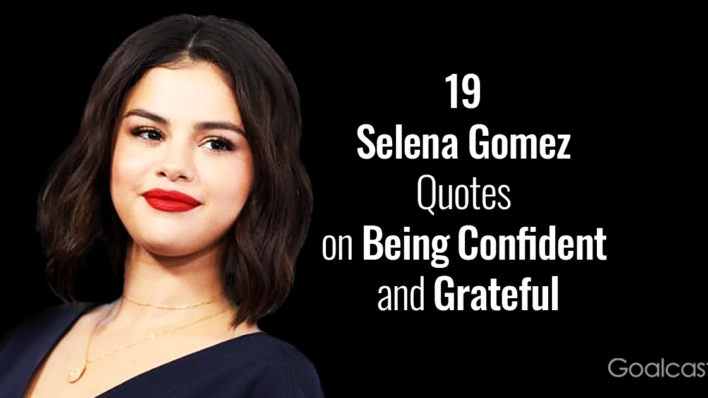 19 Selena Gomez Quotes on Being Confident and Grateful

Selena Gomez is a sought-after American singer, actress and producer who started her career at a young age by starring
By Flavia Medrut    December 5, 2018

Selena Gomez is a sought-after American singer, actress and producer who started her career at a young age by starring in “Barney & Friends”, a children’s TV series.

Her real breakthrough, however, was the leading role she played in “Wizards of Waverly Place”. After blooming into a charming young lady, Gomez started focusing on her music career as well. Thus, in 2009, she released her debut album named “Kiss and Tell”.

Selena became popular also for playing an active role in advocating for the world’s most vulnerable children – she is known to be the youngest Goodwill Ambassador in the history of UNICEF.

Sadly, in 2014 it was reported that Gomez had been battling lupus. Along with the physical symptoms, the aggravation of the disease caused depression, panic attacks, and eventually forced her to undergo a kidney transplant. It became a matter of life and death, considering the long waiting lists for finding a donor.

Her friend, Francia Raisa, saved her life, as Selena was two weeks away from kidney failure. As a humble and selfless person, Francia gave the ultimate gift when she donated a kidney to her friend.

Here are 19 empowering Selena Gomez quotes that will help boost your confidence. I feel like I’m just starting, but I think I’d be fine if it all went away.

People are put into your life for seasons, for different reasons, and to teach you lessons.

I’ve learned there’s power deep down inside yourself, and you can find it when you don’t give up on yourself and when you ask for help. If you are able to look yourself in the mirror every day with the decisions that you make, that’s where power starts.

I promise you that each and every one of you is made to be who you are and that’s what’s so attractive and beautiful.

I don’t think I took the time to notice how being a woman in my position is really a gift. I want to make sure I utilize all that power.

I don’t take anything in my personal life too seriously. I have great friends and a solid group of people I love. I feel like everything else will come organically. All the people who knock me down, only inspire me to do better.

If you know who you are, it takes all the power away from that negativity. I promise.

You can’t be afraid of what people are going to say, because you’re never going to make everyone happy.

I feel very empowered and confident and comfortable with where I am.

I’m at a place in my life where I know what I deserve and what I don’t deserve, so I just want to make sure I can be the best I can be.

Never look back. If Cinderella had looked back and picked up the shoe she would have never found her prince.

I don’t want to become little or hurt or a victim. I want to be strong for girls…I just want them to know that there is an option of standing up for yourself.

I just want to be happy. If that’s me just being myself, then I don’t really care.

I never really said I want to be a role model. But then when it happened I was so down for it.

You’re figuring out who you are and there are so many different levels of emotions that you go through. The best is when you feel confident, beautiful, and comfortable with yourself.

I live my life and nothing is going to dictate how I feel unless I let it.