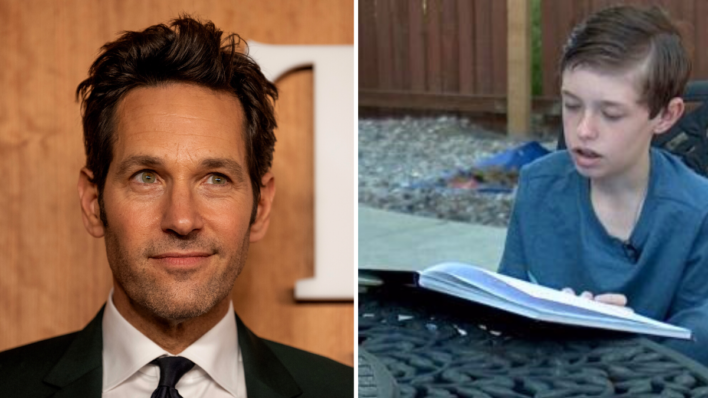 When a 6th grader’s classmates refused to sign his yearbook, older students (and Paul Rudd!) stepped in.
By Sophie Tolias    June 14, 2022

When a 6th grader’s classmates refused to sign his yearbook, older students (and Paul Rudd!) stepped in.

The end of the school year is that time of year when kids are signing each other’s yearbooks. But what happens when no one signs yours?

That happened to Brody Ridder, a sixth grader at The Academy of Charter Schools in Westminster, Colorado. “I went up to people and I asked them, ‘Can you sign my yearbook?’ and some of them were like no,” he told KDVR.

He collected a few signatures in his yearbook, from two classmates, two teachers and himself.

“Hope you make some more friends — Brody Ridder,” he wrote in his own yearbook.

“It honestly broke my heart,” his mother Cassandra Ridder said. “And that was really hard to see and read as a mom.”

Why Students Refused to Sign One Sixth Grader’s Yearbook

She took a photo and posted it to a Facebook group for parents at the school.

“I was overwhelmed with how much love and encouragement I received for Brody. It was amazing,” Cassandra Ridder told KDVR.

Other parents showed their children and the post made its way to three soon-to-be seniors.

“It’s so fun having everyone sign your yearbook and for this kid to only have people sign their names in his yearbook, it’s just soul crushing,” Simone Lightfoot told KDVR.

Lightfoot found out about the post from fellow student Logan South, who said his family spent time discussing ways they could help.

“We all just started planning that the next day we were going to go sign this kid’s yearbook,” South said.

Another classmate, Joanna Cooper, was planning to do the same. “It was really heartbreaking to see people just sign their names like just the bare minimum,” Cooper said.

Even though none of them had ever met the middle schooler, the soon-to-be seniors rounded up as many students as possible to sign Brody’s yearbook.

We walked in and we were like ‘Where’s Brody at? Is Brody Ridder in here?’ And they’re like ‘Yeah he’s in the back’ and we’re like ‘Brody! We’re here to sign your yearbook bud.’

Brody collected more than 100 signatures and they included paragraphs with words of encouragement, advice, and even phone numbers.

After that, everyone in the class started signing Brody’s yearbook. Brody said he’s not sure the kids who initially refused to sign his book will become his friends next year but it doesn’t feel impossible. “It just made me feel better as a person. I don’t know how to explain it. It just makes me feel better on the inside,” he said.

“It made me feel like there’s hope for the school, there’s hope for humanity and there’s a lot of good kids in this world,” his mother told KDVR. Actor Paul Rudd also reached out to Brody to chat!

The high schoolers didn’t just sign his yearbook, they also made an effort to get to know him, and asked about his hobbies — including chess and fencing — and gave him a pep talk, since many of them were once in his shoes.

The teens said they hope the gesture inspires other kids to be kind. “Always just be that gateway for people to feel welcome,” Cooper said.