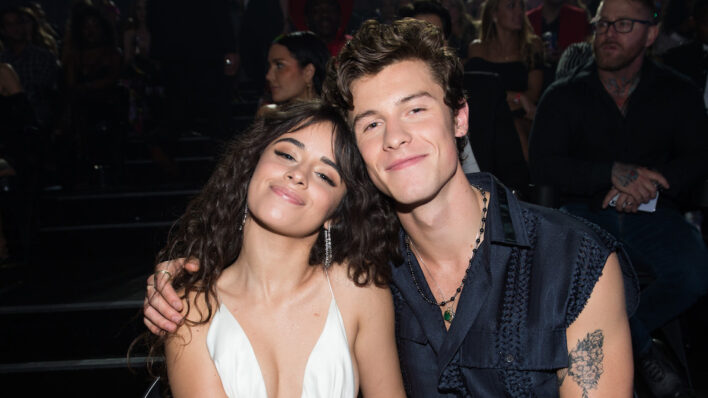 How Shawn Mendes and Camilla Cabello Went From Friends To Lovers

Not all love stories are instant and Camila Cabello and Shawn Mendes know that first-hand. The pair worked together and were friends for years before they found the courage to voice their true feelings.
By Barbara Pavone    December 4, 2020

Not all love stories are instant and Camila Cabello and Shawn Mendes know that first-hand. The pair worked together and were friends for years before they found the courage to voice their true feelings.

Not all love stories are instant and Camila Cabello and Shawn Mendes know that first-hand. The pair worked together and were friends for years before the timing was finally right and they found the courage to voice their true feelings. Speaking with VMAN in November 2020, Mendes confirmed that they’ve “known each other for, like, six or seven” years but have only been together for “a year and a half.”

Theirs wasn’t a straight path to love, but their connection could not be stopped. Mendes has called Cabello “my favorite person in the whole world” and shared how, even before they were dating, “She was always there to look out for me as a human being.” Meanwhile, Cabello told Elle, “I love him. We have always connected; we have the best time together.” And it’s that strong bond that has since helped them overcome fear and all of the “messy” realities of dating.

Here’s what we can learn from Camila Cabello and Shawn Mendes’ slow-burning love:

Rumors that Camila Cabello and Shawn Mendes were dating began making headlines in June 2019. The “Havana” singer had just broken up with her boyfriend of over a year, Matthew Hussey, and she and Mendes released the chemistry-filled “Señorita.” While they both denied the rumors at first, the young couple has since spoken publicly about their slow-burning love.

As Mendes explained in his 2020 Netflix documentary, In Wonder, he first met Cabello when they were both opening for Austin Mahone on his 2014 tour. “My very first tour ever and she was the act after me,” he recalled. “I was the first in the lineup with the shortest set and [Fifth Harmony] went on. Five years ago, man,” he reminisced.

Nothing really happened, however, as Mendes had his eye on a different priority: his career. “He was so super hyper-focused on what he was doing,” Cabello revealed, adding, “I never saw him that whole tour. I thought he was cute, but I was like, he’s doing other stuff, so whatever.”

Meaningful connections can weave in and out of your life

Camila Cabello and Shawn Mendes would meet again in 2015. This time, they were “backstage at one of Taylor’s 1989 shows” when the “My Oh My” singer “went to his dressing room to say ‘hi.’ And we, like, started writing this song,” she revealed. The track in question was “I Know What You Did Last Summer” and after they finished writing it, they “spent a lot of time with each other because we had the song together and we did a whole Jingle Ball tour together. And that’s really when the f****** saga started,” she joked, admitting:

I really liked him. I guess he liked me, but I don’t really know.

Recalling their time together working on “I Know What You Did Last Summer” and the influence it had on their relationship, Cabello told Rolling Stone it was the collab that pushed their feelings past friendship. “I really bonded with him as more than a friend,” she told the mag. However, the timing just wasn’t right.

“I think he did, too, but we were both really young, and he was experiencing the pressures of his career,” she explained, continuing, “I don’t think we knew what to do with those feelings. It was this awkward thing where we both liked each other, but we weren’t together. It was just weird,” she admitted.

Then they parted ways a second time. “An energy was there from the beginning, but after that song, we didn’t spend as much time together,” she told Rolling Stone. It wasn’t until their third reunion that the timing was finally right.

When Cabello and Mendes got together to work on 2018’s smash hit single “Señorita,” their true feelings could finally shine. “There was a period where we didn’t hang out as much just because we were both busy, and this song was really fun because we got to just hang out again like we did on the song we did before, ‘I Know What You Did Last Summer,'” Cabello shared in October 2019. As she discovered, the feelings she had back in 2015 were still there — “We started hanging out again and writing […] it just brought it back,” she said — but they still had one obstacle to overcome.

Turning friendship into romance can be scary

The timing may finally have been right, but the two young pop stars still had a major hurdle in front of them. As Cabello told The Sun in 2019, deciding whether or not to turn their friendship into something more was difficult. “When you first start dating a person and you know nothing about them, there’s less at risk there,” she explained, adding, “I think when you fall in love with somebody you’ve known for a long time, there’s more at stake.”

At the same time, all relationships require a certain amount of faith and risk-taking and Cabello soon found the upside in their predicament. “It also feels more special because it feels like the love story you see in the movies of people who have known each other for a long time but been too stupid to realize it or say it and then it happens — and that’s beautiful too,” she told the outlet.

Communication — and vulnerability — are key

Once the pair decided to give dating a try, their ability to keep their true feelings under wraps (which they had done for years) nearly derailed their budding romance. More specifically, it was Mendes’ fear of opening up and being vulnerable in front of his new girlfriend that could have ruined everything.

I have always considered myself a really vulnerable guy […] until I had a girlfriend who I was so serious about, then I realized how much I was scared of being the weak man.

Shawn Mendes to Zane Lowe during a 2020 Apple Music interview.

Revealing that he “went through a month where I couldn’t really even communicate with her because I was struggling with anxiety and I didn’t want her to see me weak,” the “In My Blood” singer confessed, “I was on the verge of ruining our relationship.”

That’s when he learned an important lesson about love: Honesty is the key to any successful relationship. “When you come out on the other end and you’re like, ‘Listen, I’m struggling here, it’s hard for me to even say this to you.’ And everything starts building and growing and getting stronger and the roots fortify, and you look around and you’re like, ‘Oh s***.’ Bravery. That’s bravery,” he proclaimed. “That’s strength.”

True love should be inspiring

As Mendes revealed in his documentary, every song he’s ever written has been inspired by Cabello — “She literally had no idea. This whole time I thought she knew,” he said — and she too has drawn from their relationship in the studio.

My song comes on the radio or something and I’m like, ‘Everything’s about you. They’re all, they have always been about you.’ She goes, ‘What do you mean?’ Like, they’re all about you. Like every song I’ve ever wrote.

“I fell in love and just opened up,” she told Variety about writing songs inspired by love for her second album, Romance. Sitting down with Elle, she added, “Honestly, this past year and a half was the first time I really experienced falling in love with another person […] You have so much more to say.”

But their positive impact on one another goes far beyond their music. As Mendes told British GQ in 2020, his girlfriend has helped him overcome his struggle with body image. “Some days I would have three hours of sleep [because] I’d get up two hours early just to be able to work out,” he said, admitting he believed that “if you don’t work out, you’re going to lose fans.” Meditation and journaling helped, but so did watching Cabello and the way she dealt with public scrutiny. “So strong, so clear and confident with her [body] and so articulate and empathetic about other people’s and it really changed my view of mine,” he told the mag. “It really changed my life.”

She also showed him the importance of family. As Mendes told VMAN in 2020, “I think for seven years, I was on such a speedy path down one way with blinders on, and I wasn’t keeping in touch with my family and friends. But when I landed with Camila, immediately she had her family around more […] and it really made me like, ‘Oh, I should call my mom,” he confessed. “I started reaching back out to my family and friends and all of these connections I felt were further away,” he said.

I felt a little bit alone out there and she changed that for me.

As for Cabello, she told fans she’s “learned a lot about love with this guy,” like the fact that relationships require work but it’s worth it with the right person. “It’s not just the happy blissful moments you see in pictures and videos,” she wrote on Instagram. “When you’re in a relationship with someone, it feels like they are this mirror reflecting yourself back to you. I constantly have to confront my fears, my anxieties, my insecurities, my patterns of thinking, my beliefs about life and about myself,” she explained, telling her followers that “It’s not as simple as it looks in pictures sometimes. Sometimes, it’s messy and uncomfortable and ugly.”

“To be in love means to choose that person over and over again, to go through the messy stuff with,” she professed and she’s right. Camila Cabello and Shawn Mendes may be young, but their relationship has already taught them a number of invaluable lessons, like the need to take risks, the importance of communication and vulnerability, and the simple fact that you need to be prepared to take the good with the bad. No relationship is perfect, but when your connection is genuine and long-lasting like theirs, it’s all worth it in the end.