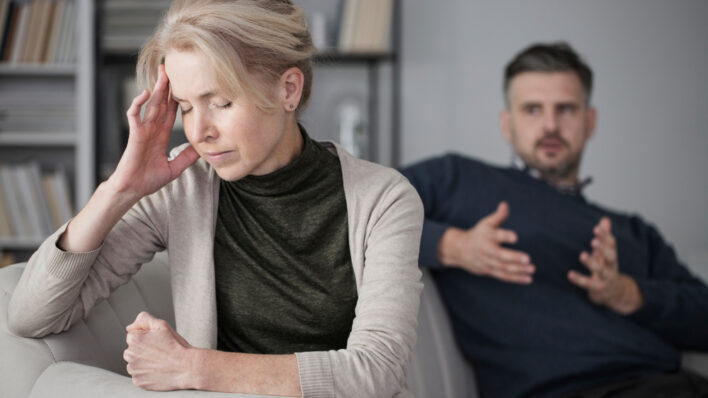 Stress may have become a fairly expected and accepted part of our lives, but that doesn’t mean it’s not affecting
By Eliza Theiss    April 17, 2019

Stress may have become a fairly expected and accepted part of our lives, but that doesn’t mean it’s not affecting every aspect of our day-to-day when left unchecked. Not all stress is bad, of course — igood stress is an element of pressure that can bring on the most amazing breakthroughs when channeled constructively.

So what are some of the biggest signs stress is affecting your relationship — and how do you fight them?

1. Your partner is increasingly withdrawn

Normally you and your partner check in with each other regularly and with ease. Lately, though, your partner has become increasingly silent. You know something’s up, but they’re not talking to you. Sometimes, it can even feel a lot like you’re alone.

This doesn’t necessarily mean your partner doesn’t trust you. Many people, especially men, deal with stress by drawing into themselves. It’s not a conscious decisionl it’s simply a defense mechanism to protect against further stressors.

In other cases, partners will draw themselves inward, not because they are stressed, but because their partners are. One of the most destructive sides of sustained stress is its power to fixate our brains on negative thought patterns, which will bring up discontent and frustration, often in disproportionate amounts.

A 2014 study on paramedics, a field well-known for experiencing high levels of stress, found a direct link between stress and marital tension. When stressed paramedics got stuck in negative thought patterns, their spouses withdrew into themselves and marital discontent grew. In fact, both would independently report increased tension in the marriage.

If your partner’s grown silent or distant, check in with yourself and your own stress levels.

Have you been redirecting pressure from work onto your home life? Or is your partner maybe dealing with an ill relative? Maybe your finances took a hit recently and they’re having trouble processing?

Whatever it is, communication is key — and so is putting judgement aside. If you’re withdrawn, tell your partner why. If they’re withdrawn, ask them why.

Whether it’s the milk being left out on the counter again or forgetting your mom’s birthday, you’re constantly finding yourselves in passive-aggressive arguments about things that in the grand scheme of things don’t really affect your love and relationship.

If you feel like you’re being increasingly criticized for trivial matters or you find yourself more frustrated with your partner about non-issues, it might just be misdirected pressure from outside stress.

Nobody likes their behavior to be scrutinized and dissected.

On the other hand, stress literally forces the brain into negative thought patterns, fixating on negative events — even if they’re small events, like a cap left off your toothpaste.

If that’s the case, you may need to do some hard work on how you process stress and communicate about frustrations. Or, you may need to engage your partner in a difficult, but gentle conversation about how their difficulties are impacting you. Ask how you can help, and genuinely support them with words and actions.

3. The romance is fizzling out

Since prolonged stress can have a direct impact on the human libido, it’s no wonder that one of the first signs that stress is affecting your relationship appears in the bedroom. From an evolutionary perspective, it makes sense, but it’s less than convenient for our modern existence. After all, the boost of dopamine and serotonin a healthy sex life brings does wonders in fighting stress hormones.

It’s not just about sex.

Stressful periods tend to be associated with less free time. If one of you keeps spending long extra hours at work to deal with mounting pressure and deadlines, that severely cuts down time spent together.

Whether it’s a romantic dinner, pizza on the couch with the latest episode of your favorite show, catching a cool new band, or going away for the weekend, every couple needs to consciously invest time to keep the spark going. Pair that with the increased levels of exhaustion stress brings and a breakdown in communication, and you get serious emotional distance.

If sex is the last thing on your mind now, make sure your partner knows why. Explain that you’re dealing with a lot of pressure and the slump in intimacy does not mean you’re any less attracted to them or in love with them. And make sure you still make time for being together, even if it’s just take-out on the couch instead of the usual night out.

Resolving the stressor may be a long and difficult process.

You can’t effectively support each other if you’re out of sync. Stay connected, and not only will your relationship survive stress, but it will come out stronger and closer connected than before.