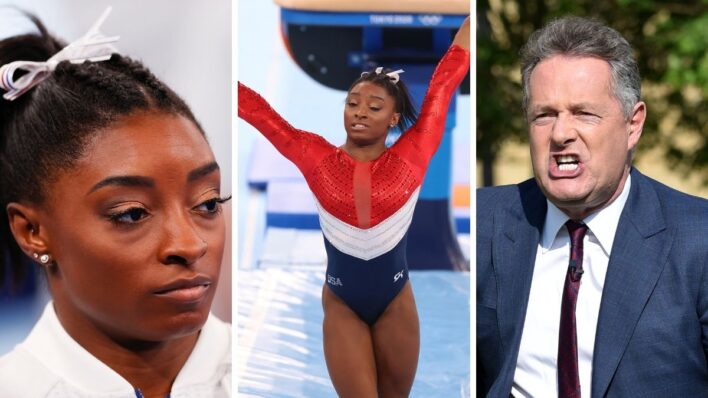 Simone Biles proves she is the role model our next generation needs by withdrawing from The Olympics and prioritizing her mental health.
By Arielle London    July 30, 2021

Simone Biles proves she is the role model our next generation needs by withdrawing from The Olympics and prioritizing her mental health.

As a gymnast, possibly one of the indisputably most elite gymnasts, Simone Biles knew just that. She knew that her mind was not right and therefore she might put her body in danger if she continued on. So, she withdrew.

The amount of global, domestic, and personal pressure that Simone is under is clear to see just in the viral nature of the envelopment of communal support in contrast to the negative backlash alone.

People are mixed in their opinions as to whether or not Simone did the right thing. Which to me is incredible, because she is a human being. At what point did people become so cold that they removed emotional and mental states from the experience of being a human?

Even elite athletes like Simon Biles can get “the twisties”

The twisties are when a gymnast experiences a mental block that impedes their understanding of their spatial surroundings. It can happen completely out of no where and make an athlete lose their direction, concept of where they are in the air, or even perform an additional twist. This can lead to serious injury since you do not have clear awareness of where the ground is and how to make a safe landing.

Deanna Hong, a producer for Golden: The Journey of USA’s Elite Gymnasts tweeted, “One former US elite gymnast I talked to said that if it was someone other than Simone Biles who had made that same error, they would have certainly blown a knee, at minimum.”

Hong continues saying, “Another said if it had happened to her instead of Simone, ‘I probably would have ended up paralyzed.'”

In a Q&A on Instagram, Biles discusses the situation saying, “I also have no idea how I landed on my feet on that vault because if you look at the pictures and my eyes you can see how confused I am as to where I am in the air.”

“Thankfully I landed safe enough, but I also don’t think some of you realize I was supposed to do a 2 ½ and I only completed 1 ½ twists before it looks like I got shot out of the air.”

In athletics, we often expect athletes to win but we dehumanize them in the process. Currently leading the charge on the dehumanization process is head troll Piers Morgan.

Piers, who famously walked off the set of Good Morning Britain for being criticized regarding his clear and open obsession with Meghan Markle, has decided to come for yet another Black woman’s mental health.

He even goes so far as to say that she is playing both the “mental health and race cards” in his lengthy article on the subject posted on The Daily Mail. In the piece, Morgan criticizes Biles for letting down her country, fans, and teammates (all of which he is clearly not a part of) claiming that she should have pushed through and stayed in the competition.

Naomi Osaka and Simone Biles are the roles models our future generation needs. Not just because they do incredible things on the world stage, but because in spite of everything they prioritize their mental health, which is always right. Even in the face of tough and unrelenting criticism, and the stigma associated with the words “mental health,” they are open to say the words out loud.

Simone and Naomi’s decisions concern us all

Mental health issues range from severe illnesses to manageable or temporary conditions. When someone like Simone Biles or Naomi Osaka comes out and shares that they are currently struggling with a mental health issue those who suffer in silence can often feel less alone. Biles and Osaka are champions even if the Piers Morgan’s of the world try to condemn them. It doesn’t matter how many lengthy posts he writes because Naomi Osaka and Simone Biles’ messages are loud and clear: prioritize your mental wellness above everything.

Whether you are an elite athlete or just about anyone else, you set the best example for others when you care for yourself first. Mental health management requires conscious self-care work to help maintain your mental states and emotional regulation. When you put yourself first, you encourage someone else to put themselves first, and the next person, and the next person.

Mental health is physical health and there is possibly no better example of this than Simone Biles getting “the twisties” at The Olympics. In the event that you get “the twisties” in everyday life, make sure to prioritize your mental health for yourself. And when you do that, be aware that you are setting off a chain reaction allowing others to do the same.