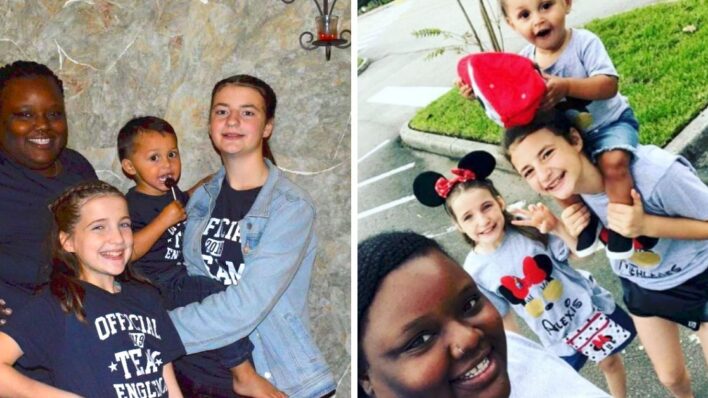 Single Mom Shares The Inspiring Story of Her Adoption Journey

Treka Engleman lost her mother when she was only 6-years old. She always wanted to help other children without parents by giving them a home.
By Aly Walansky    June 9, 2020

Treka Engleman lost her mother when she was only 6-years old. She always wanted to help other children without parents by giving them a home.

Treka Engleman knows what it’s like to grow up without a mom. She lost her own when she was only six years old. But instead of growing up bitter or resentful of those who did, she decided to channel her experience into something wonderful.

Treka always loved children and wanted one day to have a home full of them. Her dream was to fill her home with foster children who needed a mother, just as badly as she had when she was a child.

Yet, it was more complicated than it looked

However, life complicated that plan. Treka is single, and doubted that she’d qualify to be a foster mom, as an unmarried young woman. Eventually, though, her doubts faded away and decided to take the plunge.

“For years, I wanted to be a foster mom. Yet I was always hesitant to start the journey into foster care because I didn’t think a single person like myself could be a foster mom (no spouse, no children). I didn’t think I would qualify, but I did some research, asked around, and made some phone calls anyway.

“As it turns out, you just have to be at least the age of 21, you can be single or married! I talked to my family about it and I just decided I was going to go for it,” she told Love What Matters.

“August of 2016, I called St. Joseph Orphanage and they sent me the schedule and what I needed to start my classes,” Treka revealed.”There were two months of classes and it was a complete emotional roller coaster. Some classes were simple and some were hard to sit through.”

“Hearing the stories about some children that go through foster care just brought tears to my eyes and broke my heart,” she continued. “I mean, I lost my mom when I was young, but I couldn’t imagine being without my family. At that point, I wanted to take every kid in that I could.”

Eventually Engelman finished the necessary classes to become a foster parent, and had to decide the sex, race, and age range of the child she wanted to foster.

There was never really any question of the matter. I immediately marked African American and Caucasian. Color doesn’t matter to me. Love is love no matter what color you are.

Not long after, Treka was called about a five-day-old baby in need of a home.

“I thought to myself, ‘How old?!’ She gave me a little background and I just couldn’t say no. I told her yes, yes, yes he can come to my home. On December 8, 2016, Elijah Lee Hill came to my home. My heart just immediately dropped when they brought this tiny little baby into my home,” she recounted.

Her heart, like her home, still had a lot of space left

A few months later, Treka learned two sisters that also needed a home. However, when the time came, only one of the girls arrived.

“I heard the knock on the door and there stood this beautiful, petite little girl. Her name was Alexis Bowman, but I realized she was alone, even though they said two sisters would be coming. I soon found out her sister Mercedes Bowman had gotten into some trouble and went to a group home.”

“I made sure they kept in touch as much as possible. We visited on weekends when we were free so they could spend time together. Mercedes loved showing her sister off to her friends in the group home,” she recounted.

Eventually, Mercedes left the group home, and Treka asked her caseworker about reuniting the sisters. “We started overnight visits then eventually on March 16, 2018, Mercedes came to live with us. The girls and little Eli were all so excited.”

So now at this point, it was me, a single mom 30 years old with 3 children ranging from 1 to 15. What was I thinking? You know what I was thinking? I love these kids and I wouldn’t have it any other way. They needed a home and I had more than enough to give them. They immediately became apart of my family.

Treka acknowledges that being a black woman with a biracial family is not easy. Many people don’t think she is her children’s mother.

“My family does not see color, just kids that needed someone. Yes, I have had my fair share of stares while we’re out in public, but we just keep walking by unbothered. I’ve had people ask me, ‘Oh, are you babysitting?’ and my response is no, they are my children,” Treka revealed.

No questions asked. I never say ‘foster children,’ but my children. Because that’s what they are and always will be.

She adopted the three children and on November 1, 2019, they became a family of four. And Treka has a message for everyone who has anything negative to say about her family.

“What I want to say to all the people who gave me negative comments after seeing that I, a black woman, adopted three white children: I am doing something that most couldn’t do,” Treka said.

These children are in a great home with a loving mother. Love has no color in my home and they are loved unconditionally.

Families are made up of people of all shape, sizes and color

Treka’s inspiring story reminds us that love has no bounds but also that parenthood does not have to be a one size fits all experience. Despite being single, Treka took the plunge and changed the lives of these children–and they changed hers too.

When you remove imaginary boundaries from your thinking, you’d be surprised at where life can lead you.

Looking for more uplifting content? Check out our article of quotes that will inspire you.