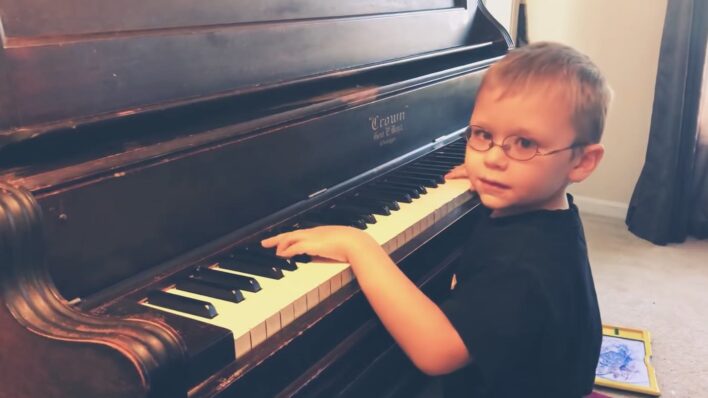 When you hear the story of a blind little boy, it may seem like a tragic tale about someone struggling
By Aly Walansky    April 10, 2019

When you hear the story of a blind little boy, it may seem like a tragic tale about someone struggling

When you hear the story of a blind little boy, it may seem like a tragic tale about someone struggling to keep up with other kids their age. That’s not the case for Avett Ray Maness, though. In fact, this six-year-old boy is showing he’s leaps and bounds beyond his peers.

The young piano prodigy from Dayton, Ohio, who was born with optic nerve fibroplasia, is completely blind in one eye and has very limited sight in the other. These limitations have not held Avett Ray back, however. He has even taught himself to play piano, and did so by ear!

“The moment he could pull himself to reach the piano, he was playing the melody to ‘Twinkle Twinkle Little Star,'” Avett Ray’s mother, Sara Moore, told CBS News.

This began when Avett Ray was less than a year old, though he now has a piano teacher to help him hone his craft and learn more advanced techniques.

“Music is in his body,” Moore said. “He’s really practicing on performing now. Since his talent is so amazing, people are asking him to perform.”

Avett Ray is now taking his show on the road, so to speak, performing at amazing events like a Ronald McDonald House fundraiser in April. He recently performed at Centerville, Ohio schools, and 900 people came to see him, according to his very proud mom.

Avett Ray is very proactive and ambitious about spreading his music.

In fact, he’s asked his mom to send his videos to Adele to help get his music out there. There’s even a super sweet video of the boy asking his mom to text Adele.

Some of Avett Ray’s favorite songs to perform are classic rock tracks by Queen and The Turtles, and he hopes to use his tremendous talents to teach others to be accepting and understanding of people with special needs. Avett Ray’s mom even wrote a book called Cotton Candy Clouds to teach people how to show support for the visually impared.

“He’s the character in the book,” Moore said. “Basically, he couldn’t see the clouds in the sky, so I wrote this book so he could see them.” The book serves as “a chance to talk about diversity and how everybody’s made special and we’re all born with our own gifts,” Moore explained. “I teach people how to engage with blind and visually impaired people.”

Avett Ray is an old soul, according to Moore, and he’s using that soul for something so wonderful and beautiful. We can’t wait to see what he comes up with next!