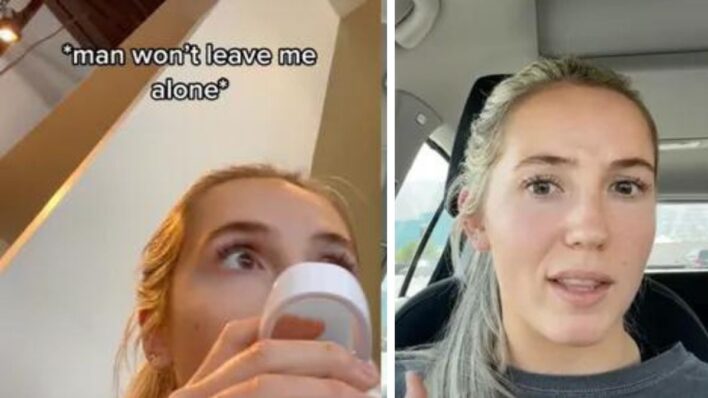 Quick-Thinking Starbucks Barista Protects Woman From Harasser By Stepping In

One brave barista picked up on a client’s quiet hints for help when a pushy male wouldn’t. Unwanted advances For
By Bryan Liquor    September 8, 2021

One brave barista picked up on a client’s quiet hints for help when a pushy male wouldn’t.

For most, Starbucks is a place to disconnect or dive into some work along with a pumpkin spice latte. However, for Tik Toker @greenybeany420, otherwise known as Ave, it was an awful experience, and she captured the cringefest on cam.

The camera is angled up to a visibly uncomfortable Ave, while you can hear a man’s incessant, inaudible chatter in the background.

Fortunately for Ave, one barista took notice of the harassment and came over to her table. While refilling her water, she leaned in and asked if she was okay. Ave replied that she “was about to head out.”

The barista then refilled her water bottle so she could keep Ave company and continue talking.

The video then cut to Ave in her car, still visibly shaken.

On a bright note, she said the entire group of employees let her know that she could stay, as they were planning to remove the man. Apparently, “This isn’t the first time that he’s harassed a customer.”

She couldn’t have been more grateful.

“What a great way to respond in this situation. thank u Starbucks baristas !! felt much safer bc of you guys,” read her Tik Tok caption.

The event quickly went viral, racking up 1.2 million views, hundreds of comments and more than 150k likes. While most comments were positive, some blasted Ave for not being more direct to the man. Fortunately, many came to Ave’s defense, accusing them of victim-blaming.

Luckily, she had a brave Starbucks bunch in her corner.

“They were just so observant and helpful, they were immediately there and I’m grateful for that.”

It is pretty amazing that this sort of thing persists. Whether it’s a Starbucks, bar or bus stop, Ave and all women should be at ease.

What’s even more amazing are the majority of times most don’t step in. While this story finished well, it will take everyone setting that standard of safety so we can all write better stories in the future.