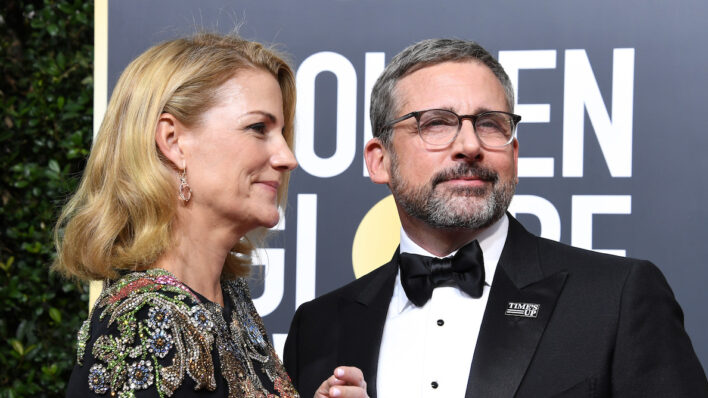 Steve Carell and Nancy Carell Prove The Power of Laughing Together

Steve Carell is one of the funniest celebrities of our time and a good sense of humour is exactly what brought him together with his wife Nancy.
By Barbara Pavone    May 29, 2020

Steve Carell is one of the funniest celebrities of our time and a good sense of humour is exactly what brought him together with his wife Nancy.

It’s something you don’t often see in Hollywood: A couple who’s able to withstand the test of fame and time for over two decades. But Steve and Nancy Carell aren’t your average Hollywood couple. Married since 1995, the pair has shared countless laughs both on- and off-screen.

That’s because Nancy is a comedian and talented actor in her own right. She got her start on the 21st season of Saturday Night Live, which ran from 1995 to 1996, and has since collaborated with her favorite partner — Steve — on numerous projects. Given the pair’s 25 years of wedded bliss, it’s hard to believe that they almost let their connection slip by. As they learned, though, a little courage goes a long way and can lead to results you never expected.

Here’s what we can all learn from Steve and Nancy Carell’s decades-long union:

Taking a chance on love is never a bad idea

Steve Carell met his future wife, Nancy Carell (née Walls), at the Second City Theater in Chicago in the early ‘90s. “I was immediately attracted to my wife,” he recalled in a 2013 interview with The Guardian.

She happened to be in one of the improv classes I was teaching. She’s beautiful, intelligent and really funny.

In addition to sharing laughs in the classroom, the pair also spent a lot of time together outside of school — albeit awkwardly. As the funnyman told Ellen DeGeneres in 2015, “[Nancy] worked as a bartender across the street and I used to go in after shows and try to strike up a conversation.” Unfortunately, that was easier said than done.

“We were both very, very timid, sort of nervous, shy people around each other,” he recalled. “The conversation would go something like, ‘Hey, you know, if I were ever to ask a woman out, it would be someone like you. Exactly like you.’ And she’d say, ‘If a guy like you were ever to ask a woman like me out, I would definitely do that.’ This went on for weeks,” he laughed.

Preconceived notions are the enemy

Although he did eventually muster up enough courage to take a risk and ask Nancy on a date, the Despicable Me actor almost missed his chance at love because of his incorrect assumptions.

As he told The Guardian, he was hesitant to reveal his true feelings because he was certain they weren’t mutual. “She kind of checked all the boxes in my head, but I thought she hated me because she was very quiet around me,” he explained.

I thought she for sure knew that I was full of it, and I later found out that she was just as nervous as I was and trying to act cool.

What’s more, as he told Ellen, he was viewing the entire situation through a tainted glass. Remembering an incident that happened in the eight grade, Steve revealed that after his friends convinced him to ask a girl to the movies and she said no, he “never asked another girl out on a date.”

Steve and Nancy Carell share their passion, and plenty of laughs

Having shared passions is important for any couple, but sharing plenty of laughs is perhaps the biggest relationship booster of all. In the case of Steve and Nancy Carell, there’s no lack of either.

Since their first meeting, the couple has repeatedly worked together, starting in 1999 when they joined the The Daily Show cast. 60 Minutes reporter Steve Kroft recalled meeting them at the time and noted how their humor-filled bond stood out. “The two of them just kind of go at it,” he said. “I mean, it’s like a comedy team.”

That shared passion for comedy has translated into a recipe for success, both on- and off-screen. In 2005, Nancy joined The Office as Carol Stills in Season 2 and, in 2016, they actually dreamt up their very own sitcom, Angie Tribeca, simply because it made them laugh. “We didn’t start thinking we’re going to write a show,” Steve admitted to Entertainment Tonight. “We just came up with this name that was really dumb and it just kept making us laugh.”

And while spending so much time together and blurring the lines between home life and work life could spell disaster for many couples, it’s the opposite for the Carells. “We tend to get along very well,” Nancy told ET when asked about their secret to success. Steve agreed, adding, “She makes me laugh more than anybody.”

The right partnership will give you strength

While Steve assured The Guardian in 2013 that “there’s no secret [to marriage] – I think you get lucky,” he did reveal a key component to knowing that you’ve found The One.

“I knew early on that she was the right one,” he told the outlet before recalling their 1995 wedding. “I’ll never forget standing at the altar and I saw her coming down the aisle – immediately a sense of calm came over me,” he said, adding.

There was an ethereal sense of how right it all was and more than anything it was very empowering knowing that person was going to be my partner and have my back. It just made me feel strong, and I’ll never forget it.

Steve shared a similar anecdote with Entertainment Tonight, calling his wife his “protector” before reminiscing about their nuptials. “I was super nervous […] and it’s 105 degrees out, and the church didn’t have air conditioning, and I’m sweating buckets,” he laughed.

“I was standing on the altar and I turned and I saw her coming down and I’ll never forget it — I instantly stopped sweating and I was like that person has my back.” He continued, “I thought, I’m so much more powerful now that she is a part of my world.”

“When people talk about their happy places, that’s home and family for me,” Steve told ET in 2018.

That family includes two children — Elisabeth Anne, born in 2001, and John, born in 2004 — and yet another thing the Carells share is their approach to parenting. “You’re doing your kids a disservice if they do get everything they want because that’s not the way life’s going to go and I think kids have to have some reality,” Steve told The Guardian. “My children don’t expect to get everything and I think our greatest achievement so far is that they respect us and listen to us.”

In fact, the couple’s love story is full of achievements, from overcoming their initial trepidations to making their way through life as the perfect team. Steve and Nancy Carell’s successful relationship and respective careers have proven that the right partnership can give you strength and make you the best possible you. It can give you courage and bring you happiness you never expected… as long as you’re willing to put yourself out there and take a chance.