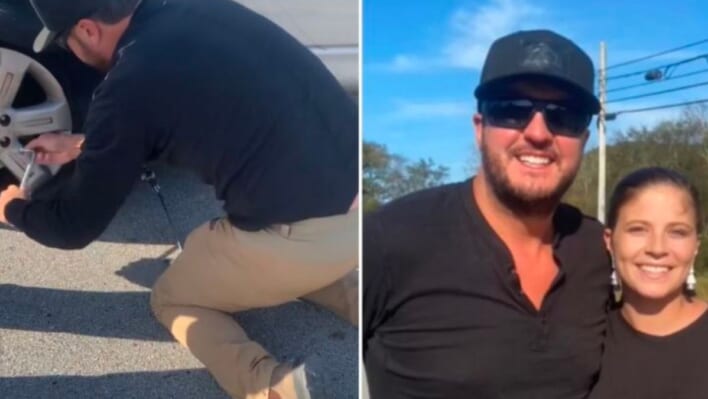 Luke Bryan may be a country music star, but he’s not too famous to stop and help change a tire.

Courtney Potts and her two young kids were headed home in Columbia, Tennessee, when one of Potts’ tires blew and she pulled over to the side of the road. Thankfully another driver stopped to help her.

The other driver turned out to be Luke Bryan. Stopped near a dangerous curve in the road, she said Bryan “went into dad mode” to help her.

Courtney Potts told Taste of Country: “I got out and did a double take and as soon as I heard his voice, I didn’t even have time to be in shock because he’s like, ‘Look, we really need to get you out of this road because I almost hit you.'”

Her video of the incident went viral and women were commenting on his butt on her TikTok, she told Taste of Country.

“And it was more of a dad moment. He was seriously worried about me and fixing the tire on this car,” she said.

RELATED: Why We Need To Talk About Luke Bryan’s Comment On Katy Perry’s Hairy Legs

To those who follow him, his kindness isn’t surprising. After experiencing several family losses, Bryan has talked about how he thinks it’s important to pay it forward. “If I can inspire people to move on from tragedy, hopefully by my behavior, that’s what life’s all about for me,” Bryan told TODAY.

Bryan lost his older brother, Chris, in a car accident in 1996. His older sister, Kelly, died of natural causes in 2007, and seven years later Kelly’s husband, Lee, died of a heart attack. Bryan and his wife, Caroline, raise the late couple’s kids as their own.

Luke Bryan Has His Own Touching Story

Although he didn’t share any details, Bryan has told Us Weekly that he was hit by a car in the second grade.

Bryan told Today he thinks his late family members look out for him.

Luke Bryan said: “Maybe Chris and Kelly and Lee have moved some puzzle pieces around to make my life so fortunate. When I say my prayers at night, I have to say, ‘Thank y’all for looking after us down here.'”

Bryan hasn’t let fame get to his head. And not only is he grateful for what he has, but he knows how important it is to pay it forward.

Potts has always been a fan of the country crooner and has even seen him perform. But she is an even bigger fan now!