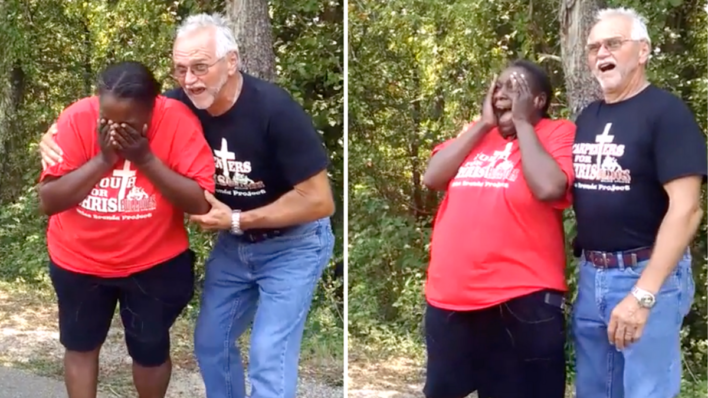 The whole community got together to aid the beloved school janitor.
By Lindsey Staub    August 24, 2022

The whole community got together to aid the beloved school janitor.

High school entails four of the most formative years for a teenager, and the people who surround you during that time can largely impact who you are. Supportive teachers, helpful crossing guards, and kind janitors are with you nearly every day, and their generosity can inspire. That’s exactly what Brenda Hurst did.

Why the Student Council Blindfolded a School Janitor

Hurst is the beloved head janitor at Boiling Springs High School. She has had a positive impact on many of the students at the school, including the student body president, Alexis Ork.

When Ork learned that Hurst’s family home was destroyed in a fire, she knew she had to help the woman who had so often helped her. With help from the student council and the Carpenters of Christ, Ork and the town set out to rebuild the strong woman’s home.

RELATED: Elderly Woman Loses Husband and Her House in the Same Day – Her Neighbor’s Response Surprises Her

“She changed my life, and I’m honored that I was part of changing hers for the better,” Ork told WYFF News 4.

A year later, the house was finished and the celebration began.

A big reveal took place, starting with a patrol car escorting Hurst down street of her former house. A large crowd gathered around a blue bus, which was parked in front of the new home to conceal it from view. When Hurst removed her blindfold, she saw that she was surrounded by her fellow townsfolk there to support her.

Finally, the bus pulled away. When she saw the house, she crumpled. The new house was gorgeous and fully furnished, complete with red and black furniture to match the school colors and a stone bulldog like the school’s mascot in the front yard.

“The Lord allowed us to have it fully furnished,” Carpenters for Christ member Mike Ravan told Hurst.

Hurst cried as she made her way through hew new home.

“It’s a blessing. It’s an honor. I always say, ‘I’m overwhelmed.’ I still say, ‘God is good.’ No matter what you go through, keep your faith and trust in Him, and He’ll work it out for you,” Hurst said.

RELATED: Struggling Parents Work Overtime to Provide for Kids – Their Son Blindfolds and Leaves Them Speechless for This Reason

One of her favorite parts of her new abode was the walk-in closet. Upon seeing it, she went inside and danced in it, overjoyed to finally have so much space to keep her belongings.