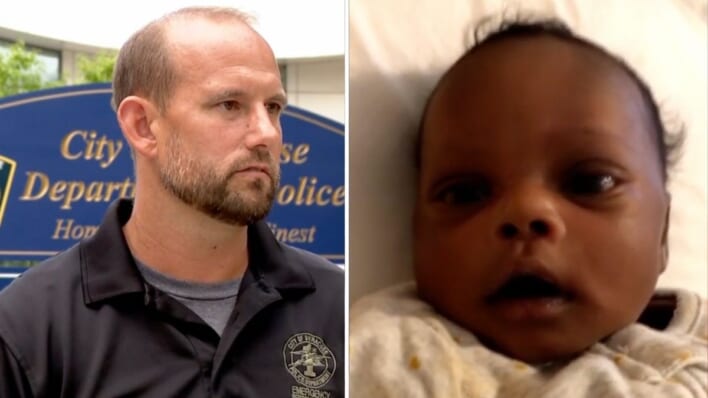 After racing through traffic to make an arrest, one Syracuse cop prevented a tragedy from taking place.
By Sophie Babinski    September 19, 2022

After racing through traffic to make an arrest, one Syracuse cop prevented a tragedy from taking place.

Nothing is scarier than a newborn in distress. Mothers follow all of the rules and try their best to protect their children. Nevertheless, sometimes things happen and infants get very sick, or pass away suddenly. Ask any new mother, fear of SIDS is something that keeps them up at night.

One woman was living every woman’s nightmare when a police officer found himself in the right place at the right time, and sprung into action.

From High-Speed Chase to an Endangered Infant

One late summer day, New York State police officers were involved in a traffic pursuit when they heard a strange commotion. They had just apprehended their target, and were getting ready to leave the scene when they followed the sounds of distress to a young woman and her two month old baby. Initially confused as to what was going on, the police quickly realized that the woman’s baby was in critical condition and had stopped breathing.

“We just heard a loud commotion from the area, looked over and we went over to that area, seeing what was going on,” said Detective AJ Phillips. “I saw a woman frantic with a 2-month-old baby in her hands, lifeless.”

The Syracuse Detective Springs Into Action

The detective on the scene, Detective AJ Phillips, had been a medic in the military and was quick to perform first aid. At first, everyone thought the baby was choking, so Detective Phillips sprung into action, performing back blows on the baby.

Once he realized that the blows were not working, he switched gears and began performing rescue breaths on her. The baby began to stir, showing signs of life. Just in time, medical help arrived to take over.

Legacy of a Survivor

The baby, whose name is Legacy, survived. Her mother Aaliyah Young was grateful to the police for taking time to look into what the commotion was during their traffic chase, and then dropping everything to make sure her daughter lived.

The true Legacy in this story is the life of the little baby, whose community loved her from such a young age that they rallied and did everything they could to make sure she thrives and lives a long and prosperous life. Her story and that of the heroic detective will always be intertwined. When life calls on you to be a hero, you’ll be ready too.