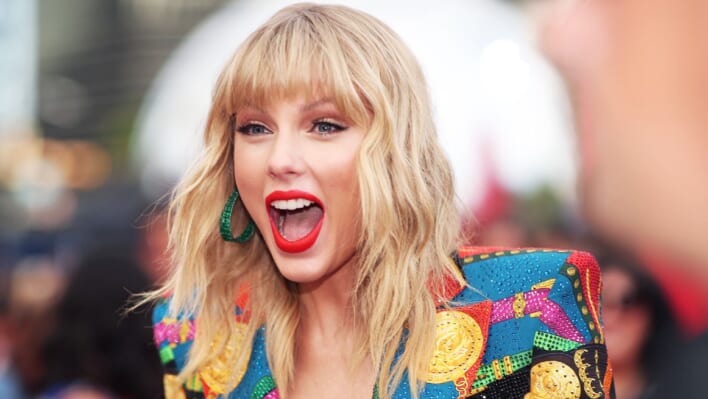 It’s not just a shiny new album and sparkly new videos, Taylor Swift’s latest album is not only breaking records but smashing them into tiny little pieces while making music history.
By Freyja Catton    November 1, 2022

It’s not just a shiny new album and sparkly new videos, Taylor Swift’s latest album is not only breaking records but smashing them into tiny little pieces while making music history.

Taylor Swift dropped her tenth studio album, Midnights, a little over a week ago and the music world is still reeling. The album has already soared through the charts, selling a jaw-dropping 1 million copies of the album in the first week alone. She shattered single-day streaming records on Spotify, with 80% of her album sales coming from digital downloads, CDs, cassette, and vinyl. Is there anything she can’t do?

The answer is no, no, there’s not. Swift is capable of it all. And she proves that by making music history as the first artist to ever claim the entire Top 10 on the Billboard Hot 100.

Taylor Swift Is a 10 Out of 10 In Music History

We all are, Taylor. “Anti-Hero” stole the number-one spot on the Billboard Hot 100, and “Lavender Haze” came in second. In total the two songs have well over 100 million streams.

RELATED: Drake Pays Off Man’s Debt And Doubles His Savings To Encourage Him To Reach His Goals

Swift knocks Drake out of the first-place position when he had nine top 10 singles from his 2021 album Certified Lover Boy on the list. The best part is Swift has already announced her 27-date US Tour.

Glittery New Video For The Fans

Following the album release, Swift released her latest music video, “Bejeweled” which features a new spin on the classic fairytale Cinderella, in which Cinderella gets a castle and shiny, material things instead of a marriage proposal.

The video features cameos by celebs and friends alike such as friend and long-time collaborator, Jack Antonoff as the Prince; actress Laura Dern as the stepmother; Swift’s long-time besties, sisters Esle, Alana, and Danielle Haim as the stepsisters; Dita von Teese as the fairy goddess; and makeup artist Pat McGrath as the Queen.

There is, of course, lots of glitter, glamour, elaborate costumes, and Easter eggs with references to previous works but references to future works as well. Pretty much everything we all want from Swift these days.

At the age of nine, Swift already knew what she was interested in: music. By 11 she was performing at local festivals. At 12, she learned how to play guitar and write her own music. At 14 her family relocated to Tennessee so she could pursue her country music career while attending a homeschooling academy.

RELATED: Sophie Turner and Joe Jonas’ Comments About Taylor Swift’s Music Will Change Your Idea About the Couple

Swift spent nearly her entire 34 years working towards her childhood dreams—a feat unto itself. She knew what she wanted and was nearly single-minded in achieving it. Swift went from country music star to pop star, she is a storyteller who took control of her own image, branding, and music all while focusing on her end goal: doing what she loved and being in charge.

In 2019, when Scooter Braun bought up from under Swift her first six studio album masters, valued at $200 million, Swift hit back. The Midnights singer re-recorded her albums (under a ‘Taylor’s Version’ title) so that she can control how her music is used.

Swift’s net worth is estimated at $570 million she even set the Guinness World Record for the highest annual earnings ever for a female musician. Her music is so popular that the study of her career has been referred to “Swiftology”, with several universities offer courses on Swift’s discography in literary and sociopolitical contexts.

Staying True To Your Dreams

To say Swift has accomplished more than most can dream may be an understatement. She has had her struggles (hello, Kanye) and her rejections but she has maintained true to herself, her worth and what she wants to accomplish. An easy takeaway for everyone.

While we all may not reach the same type of financial success and worldwide fame, we can still focus on our commitment to what matters personally, whether it’s career, family, or passions.