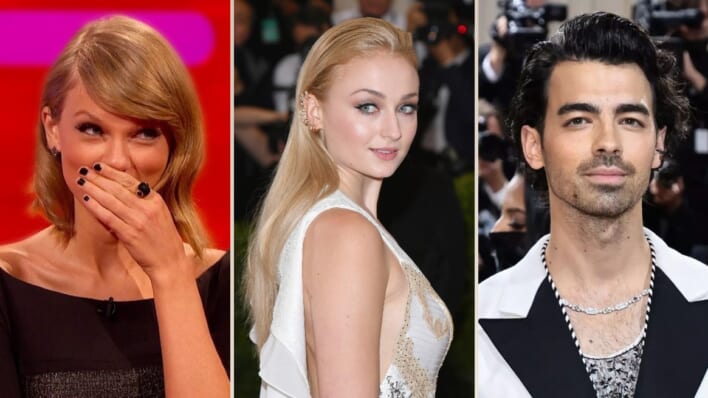 Everyone knows about the epic teenage blowout that was Taylor Swift and Joe Jonas’ breakup. That’s why it was so surprising to see them hang out in recent years. Even more shocking is that Jonas’ wife and “Game of Thrones” star Sophie Turner is a major Swiftie! What does their newly forged friendship mean for the trio?
By Bianca Mercuri    August 23, 2022

Everyone knows about the epic teenage blowout that was Taylor Swift and Joe Jonas’ breakup. That’s why it was so surprising to see them hang out in recent years. Even more shocking is that Jonas’ wife and “Game of Thrones” star Sophie Turner is a major Swiftie! What does their newly forged friendship mean for the trio?

Relationships in Hollywood can turn from a romantic dream to a tabloid mess quicker than you can check your phone for gossip. But there’s always the odd couple that seems to stay friends despite a messy breakup that’s been amplified by digital fan mobs. Well, Taylor Swift and Joe Jonas‘ relationship seems to be on the mend after their breakup 15 years prior.

Jonas, now married to Game of Thrones star Sophie Turner has turned a page in his life and maybe rewrote the last few pages of his chapter with Swift. As it turns out, Turner is a major Swiftie – and we’re thinking Jonas isn’t so far off from the title himself.

Let’s look at a brief timeline of Jonas and Swift’s brief romance and what went wrong, including how they became friends again!

Jonas and Swift dated briefly in 2008 when the two were still teens. Jonas was in his Disney prime and Swift was a country-pop icon already. Naturally, with both constantly in the media, their relationship blew up. Like all Hollywood relationships, some were rooting for them and others… not so much.

The two only dated from July to October 2008 before Jonas broke up with Swift over the phone. She went on to call him out on the Ellen DeGeneres show soon after which she later admitted she regretted. “That was too much. I was 18.” She said, “Just some teenage stuff there.”

RELATED: How Nick Jonas Convinced Priyanka Chopra To Take A Chance On Him

The two did manage to stay friends even after the rocky breakup and have been spotted hanging out over the years. In 2021, Jonas and Turner attended Swift’s November 2021 Saturday Night Live performance of “All Too Well”.

The two are in such a good place that Jonas’ wife even went on to comment on Swift’s song “Mr. Perfectly Fine”, an unreleased song that Taylor recorded for her re-recorded album Fearless (Taylor’s Version), rumored to be about Jonas himself. She posted the song cover to her @taylorswift Instagram story, writing “it’s not NOT. A bop.” To which Taylor replied, sharing Turner’s story, “forever bending the knee for the [queen] of the north.”

The hilarious and wholesome encounter had fans envisioning dinner parties between the trio where they laughed about old times. They might not be so far off! The couple has gone on to share their love for Swift and her music on social media, including giving us insight into their favorite albums.

During a TikTok live, Jonas and Turner revealed their favorite Swift album. “My Favorite Taylor Swift album [is] 1989, hands down,” said the Game of Thrones star, “Although, Reputation was partly inspired by Sansa and Arya Stark.” Taylor did say post-release that Reputation was influenced by the series as she was watching it intently at the same time that she was writing and producing the album. She went as far as to say that her song “Look What You Made Me Do” is Arya Stark’s “kill list” essentially. As a self-proclaimed Swiftie, this definitely excited Turner. This also confirmed that Turner and Swift’s admiration for each other was mutual.

Turner and Swift fawning over each other’s artistic careers is exactly the kind of healthy and supportive friendship we love to see from previous Hollywood relationships gone wrong. Meanwhile, Jonas, on that same TikTok live responded to his wife. “1989 is a great album,” Jonas said, “Bangers.”

Jonas has mentioned Swift in a previous interview as well, praising her music and career. Buzzfeed asked the Sucker singer about re-recording old Jonas Brothers music, Jonas said, “I think I would probably re-record our entire first album. Just do something like what Taylor did recently, which I thought was really clever.”

How to Be Friends With Your Ex in Hollywood

Swift and Jonas have a past, but unlike many other celebrity exes, these two have managed to get past their teenage drama and find friendship. In Hollywood, many of our favorite A-listers run in the same circle, so it’s always a shame to see couples who are no longer together lose touch completely.

There are plenty of other past Hollywood couples that we can look to for an example of the post-break-up ideal, but it’s Swift and Jonas that have surprised us. It’s heartwarming to see Turner and Swift interact with each other and show the world what it means to forgive and move forward. It’s one thing to be friends with your ex, but to be friends with your ex’s wife as well is on a whole other level of unbothered.

RELATED: Adele Had To Pay Her Ex-Husband Millions, But Here’s Why They Still Live On The Same Street

What makes Swift and Jonas’ newfound friendship a unique situation is that they are truly happy for each other and their successes. Swift respects that Jonas is married with a daughter and another child on the way, and supports him and his wife’s relationship. Jonas and Turner reciprocate that support for Swift and her music, publicly acknowledging their favorite hits and career moves they admire from the country-pop singer.

We all have teen flings we wish we could erase, but rather than eradicating Jonas from her life and her memory, she accepted him as a friend. Some teen dramas are too petty to even take seriously, and it seems as though the Swift-Jonas break up including the Ellen DeGeneres debacle is one of them!

Relationship Goals: How Ellen and Portia Prove that Love Does Conquer All