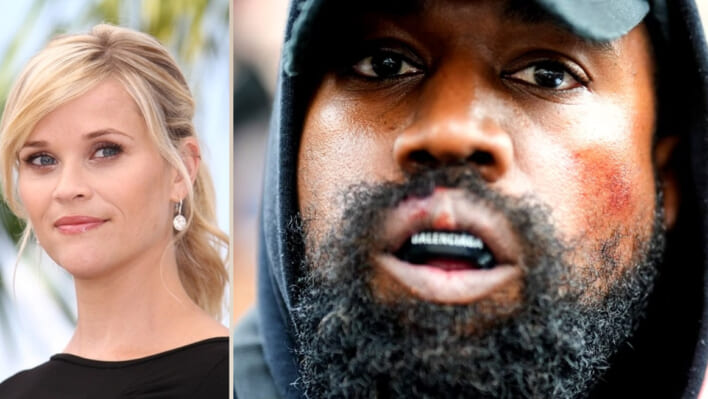 Kanye West Dropped by Adidas – Why Is Reese Witherspoon Speaking Out?

Celebrities are speaking up and holding the star accountable and their voices speak for many.
By Steven John    October 27, 2022

Celebrities are speaking up and holding the star accountable and their voices speak for many.

Kanye West is back in the news this week, and this time it’s not because he ripped a microphone from Taylor Swift’s hands at an awards ceremony or Tweeted out wrenchingly personal details about his divorce from Kim Kardashian or changed his legal name from Kanye Omari West to simply “Ye.”

No, this time it’s much worse; this time, this controversial and troubled artist has engaged in outright hate speech. The silver lining is that this time, he is not being permitted to live down what he has done. And celebrities are calling him to task.

What Did Kanye West Say That Got Him in Trouble?

No stranger to tirades and outbursts and speech that most would never dream of, Kanye West crossed a line on October 9, 2022, that was shocking even coming from him. The rapper sent out an inscrutable and reprehensible tweet, “I’m a bit sleepy tonight but when I wake up I’m going death con 3 On JEWISH PEOPLE The funny this is I actually can’t be Anti Semitic because black people are actually Jew also You guys have toyed with me and tried to black ball anyone whoever opposes your agenda”.

Hate, threats, and madness all in the space of just 51 words. And those 51 words were made all the worse as West did not take the step any sensible person would have after such ugliness — profuse apologizing and attempted atonement. Instead, over the next few days, he doubled down. And he did that most notably on a podcast called Drink Champs. West said of his remarks: “the thing about it being adidas is like, I could literally say anti-Semitic s–t and they can’t drop me. I can say anti-Semitic things and adidas can’t drop me. Now what? Now what?”

Not only was West demonstrating an ego and arrogance so large as to seem almost farcical, but he was also openly admitting that his comments had been anti-Semitic.

Is Anti-semitism a Problem in America?

According to NPR, in recent years as many as one in four Jewish people in America reported they had experienced anti-Semitism in the past year. Not that they had experienced it ever, let’s be clear, but within just the 12 months prior. And according to You Gov America, 50% of Americans see anti-Semitism as a problem. And finally, note that per NBC, Americans have a shocking lack of accurate knowledge about the Holocaust, with as many as 10% of respondents to a survey completely lacking knowledge of it, while others denied that it happened.

RELATED: Slogans Meant to Spread Hate – How One Street Artist Uses Them to Bring People Together

To be clear, few Americans are actually anti-Semites, but it only takes a few hateful people to do hurtful things, and those things can move beyond words into violence all too easily. For now, take the anti-Semitic demonstrations that occurred on Los Angeles’ 405 Freeway following Kanye West’s remarks as a stark reminder that hateful people are among us. These freeway anti-Semites hung a banner reading “Kanye is right about the Jews” from a highway overpass and flashed the stiff-armed Nazi salute at passing cars.

What have been the reactions of companies that work with Kanye West?

Kanye West is not just a rapper, but a businessman who once had an estimated net worth of two billion dollars. That figure has already plummeted, according to Forbes, and if this last week is an indicator, his wealth is sure to drop more in the near future. The fallout from his hateful rants is not a mere loss of standing and reputation, but it has had a severe (and completely deserved) financial effect.

While multiple companies quickly cut ties with West, Adidas held out until earlier this week to sever the decade-long Yeezy collaboration. As news broke of West’s anti-Semitic rantings, people flocked to social media urging the German athletic brand to reconsider working with West. Yeezy-branded products account for approximately 6% of adidas’ sales. Finally after a “thorough review” Adidas listened to the urgent appeal and dropped Kanye.

In a press release, Adidas said in part: “Adidas does not tolerate antisemitism and any other sort of hate speech. Ye’s recent comments and actions have been unacceptable, hateful and dangerous, and they violate the company’s values of diversity and inclusion, mutual respect and fairness.”

Adidas is just another company on a growing list that refuses to work with West: Balenciaga and Chase Bank both dropped the rapper, he has been blacklisted at Vogue, dropped by his agency, CAA, had a documentary project scuttled, and restricted from Instagram and Twitter. Even Johnny Depp’s Lawyer Camille Vasquez refuses to not work with West.

Is No One Holding Kanye Accountable?

And all of that is as it should be. But for many days, West was allowed to effectively stand on his soap box and spout hate without being challenged. Even after he tweeted the first anti-Semitic message, he was still invited on the Drink Champs podcast where he again doubled down on his comments.

When interviewed by prominent journalists with major outlets, such as Chris Cuomo of News Nation and Piers Morgan on Piers Morgan Uncensored, he was given a platform to rant rather than being excoriated for hate speech. (Though, granted, Morgan may have tried to extract more of an apology had West not cravenly walked out of the interview.)

The good news is that many people have indeed spoken out against West and have spoken up for the Jewish community. Politicians, social media users and celebrities of all stripes are making their voices heard, and indeed their voices speak for multitudes.

What Did Reese Witherspoon and Other Celebrities Say of West’s Anti-semitic Remarks?

In recent days, a myriad of celebrities has spoken out about West’s remarks including Oscar winning actress Reese Witherspoon who was quick to voice her opinion, “Anti-Semitism in any form is deplorable. In person. Online. Doesn’t matter where. It’s hate and it’s unacceptable. Completely understand why my Jewish friends/ colleagues are frightened for their families. This is a very scary time.”

Among other notable celebrities to add a voice to the conversation was Kim Kardashian, who did not name West directly but clearly targeted him when she tweeted, “Hate speech is never OK or excusable. I stand together with the Jewish community and call on the terrible violence and hateful rhetoric towards them to come to an immediate end.”

Friends star David Schwimmer wrote on his Instagram, “Whether or not Kanye West is mentally ill, there’s no question he is a bigot. His hate speech calls for violence against Jews. If you interpret his words any other way and defend him, guess what? You are racist. If we don’t call someone as influential as Kanye out for his divisive, ignorant and anti-semitic words then we are complicit. Silence is complicity.”

Actor Josh Gad dispatched a mini essay in response to West that read in part, “For 30 years, my grandparents … repeated one phrase to me again and again: ‘never forget.’ You see, when they were children, they were rounded up, tattooed with numbers like cattle and separated from their families…. I vowed to never forget, but never imagined I would have to once again fear the dangers of this blind and ignorant hatred towards my people… I’m going to make this super clear: Kanye West is a raging f–king anti-Semite.”

Others who added their heartfelt words of support for the Jewish community and who lashed out at Kanye West were comedian Amy Schumer, actress Florence Pugh, journalist and author Katie Couric, actress and businesswoman Gwyneth Paltrow, and many more.

What West said (and then repeated and expanded and amplified) was horrible, but his views do, sadly, represent the views of some. But West’s hateful speech has led to an outpouring of support for Jews in this country and has produced overwhelming evidence that most support inclusion and tolerance, not anti-Semitism and hate.

RELATED: Malala Yousafzai: Raise Your Voice for the Many Who Can’t

While some people chose not to hold West accountable during his interviews, many celebrities and non-celebs came forward and spoke up. Most of us don’t have the reach, clout (or fan base) as celebrities like Witherspoon or the Kardashians, but it doesn’t matter. It’s important to use our voice to say when something is wrong and hold others accountable for their actions. Because even one small voice can help influence outcomes.