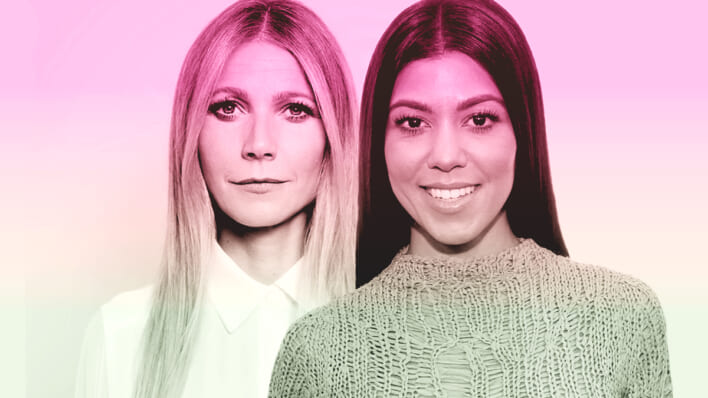 Kourtney Kardashian made headlines in 2019 when the launch of her wellness and lifestyle brand Poosh was dismissed as a copy of Paltrow’s Goop. But where do these “bitter rivals” stand now? Not where you think.
By Emily Weatherhead    June 14, 2022

Kourtney Kardashian made headlines in 2019 when the launch of her wellness and lifestyle brand Poosh was dismissed as a copy of Paltrow’s Goop. But where do these “bitter rivals” stand now? Not where you think.

When Kourtney Kardashian launched her wellness brand Poosh in 2019, she was immediately accused of copying Gwyneth Paltrow’s brand Goop.

The media was quick to pit the two women against each other, citing the competitive nature of the lifestyle and wellness industry, and the notable similarities between the brands.

These comparisons are certainly valid; after all, the brands bear a striking similarity, from the double o’s in their names, to the black and white aesthetic of their websites. The sites also cover much of the same content, outlining eccentric health trends, the latest fashion styles, and wedding and relationship advice.

The women were immediately positioned as competitors in the lifestyle and wellness industry, with speculation implying there couldn’t be room for both women’s businesses to succeed. And while Paltrow and Kardashian have been adamant in shutting down the allegations of their bitter rivalry, they’ve recently taken it one step further.

How Kardashian and Paltrow Shifted the Media Narrative

Kardashian and Paltrow are fighting back against the idea that women have to be fierce competitors simply because they choose to exist in the same industry.

Instead, they’ve chosen to see their similarities as a strength, joining forces to create a product that harnesses their similar customer bases and brand identities.

RELATED: How Travis Barker and Kourtney Kardashian Set The Foundation For Lasting Love

They’ve collaborated to create a candle called This Smells Like My Pooshy, combining Kardashian’s iconic branding with Paltrow’s infamous candle line. And while this might not seem like a revolutionary act, it sends a message about how we view women in the business industry.

A double standard certainly exists for female entrepreneurs — Ryan Reynolds and Dwayne “The Rock” Johnson have both created their own specialty alcohol lines, for example, but we don’t see them positioned as enemies for entering the same business market. Instead, we laugh about how their products both made appearances in their movie Red Notice.

Paltrow and Kardashian’s candle-collab serves as a refreshing reminder that just because two women are pitted against each other by the media, it doesn’t mean they see themselves as enemies.

Not only did these two women shut down the rumors that they were rivals, they used the opportunity to speak up about how women are viewed in business, while creating a product that will turn a profit for both of them.

“When we recognize the work and passion and dreams of another woman,” Paltrow said in a recent Instagram post, “We connect to the energy field of limitlessness. And in that field, there is plenty of room for each woman to create whatever career, business, marriage, success she can specifically dream up for herself.”

Fans can see more of how this collaboration came to be in the latest season of The Kardashians, amid the juicy relationship drama, glamorous cover shoots, and elaborate dinner parties, Paltrow and Kardashian find the time to sit down and plan their joint business venture.

So how does Kardashian really feel about Paltrow? She made it clear on the show, stating, “I do find her really inspiring, in that I feel like she’s got purpose and positivity with all that she’s doing.”

That positivity and purpose will serve both entrepreneurs well in their ventures, an against all odds in the media.