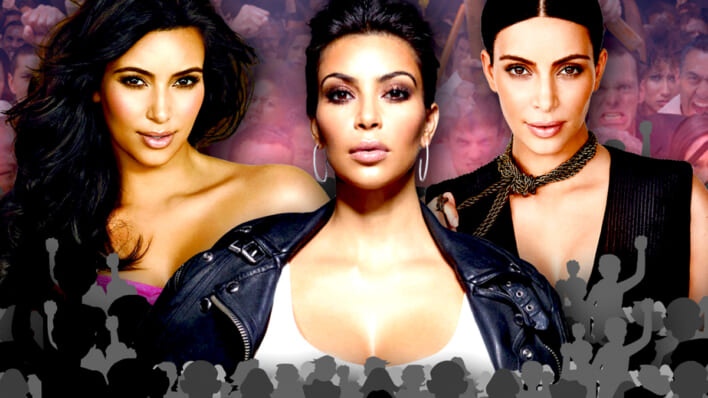 Kim Kardashian has had her fair share of controversies online, but she’s done more good than we give her credit for, too.
By Bianca Mercuri    June 10, 2022

Kim Kardashian has had her fair share of controversies online, but she’s done more good than we give her credit for, too.

Kim Kardashian may be one of the most controversial celebrities of all time, but does controversy mean she doesn’t deserve to be recognized for the good she’s contributed to the world?

Many internet pundits are quick to criticize Kim for her wealth because she was “born into it.” And she was, let’s be clear. After all, Kim’s father Robert Kardashian was a famous lawyer, gaining renown after serving as a member of O.J. Simpson’s legal team in his 1995 murder trial.

While Kim did grow up in the limelight, it’s easy to see that her current success — in multiple businesses — was all her own doing. Other than her hit show Keeping Up With The Kardashians,  Kim Kardashian is a business owner, and a damn good one at that. Between her billion-dollar Skims shapewear brand, her successful KKW Beauty makeup company, and her current ambitions of becoming a lawyer, it’s safe to say that Kim does not mind working hard.

Growing up under a spotlight is not easy. Everything you do is constantly dissected, leaving little room for mistakes and growth. Cancel culture in the last few years has hammered in this idea that no one is allowed to make an error in judgment without being persecuted online and Kim Kardashian has been a direct target in this witch hunt.

Kim has a history of using her platform for good, even in the midst of all of her questionable moments. So, why don’t we ever talk about that?

Is Kim Kardashian a Lawyer?

Kim added a level of depth to her on-screen persona in her 2019 announcement that she was studying to become a lawyer. Many young women came out to say that they respected her desire for higher education, despite already having a successful career, as well as showing that being beautiful doesn’t mean you can’t be smart. We can’t help but wonder whether her late father Robert Kardashian inspired her to make this change in her life.

In an Instagram post in 2018, Kim wrote “Last Year I registered with the California State Bar to study Law. For the next 4 years, a minimum of 18 hours a week is required.” Kim stated, “As my first year is almost coming to an end, I am preparing for the baby bar.” So, what exactly does that mean?

Kim isn’t exactly a lawyer just yet, but she’s been using her journey to a law degree as an opportunity to advocate for many important issues such as police brutality, Black Lives Matter, and much more.

Through campaigns and petitions, Kardashian has helped many prisoners get their lives back. From Alice Marie Johnson, Momolu Stewart, and Crystal Munoz to Tynice Hall, Cynthia Brown, and death row inmate, Brandon Bernard. There have been so many in between in which Kardashian advocated for, sending petitions to the court, writing letters to judges, and even taking their cases straight to the POTUS at the time.

Other than using her law degree to review cases and help those who have been tried unjustly, she has also been vocal about other important issues, like the Armenian Genocide. Being of Armenian descent, Kardashian made sure to speak out on issues of war crimes, especially related to her heritage.

She took to Twitter to say, “Today is the 105th anniversary of the Armenian genocide and I’m so proud that America has recognized this.” She’s also mentioned in the past that she visited the Armenian Genocide Museum with Kourtney and her children, acknowledging the 1.5 Million Armenians that were murdered.

She also used her platform to advocate for pertinent issues such as police brutality and Black Lives Matter. In an Instagram post near the time of the death of George Floyd, Kim acknowledged that she experiences white privilege, as well as vowed to support the Black Lives Matter movement. She shared resources on her social media accounts as well as encouraged her large following to sign a petition in regard to the GoFundMe page for Floyd’s family.

She also addressed the Black Lives Matter movement by acknowledging Alton Sterling, Philando Castille, Trayvon Martin, Mike Brown, Tami Rice, and so many others. In her post about the tragic police murders, she said that we must use our voices and the strength of numbers to demand changes in the judicial system.

Kim’s passion for change has not only included using her own voice and enormous platform to bring cases of injustice to light, she is also actively pursuing an education in law so that she can continue these efforts. As shallow as we may label Kim because of her riches, her insistence to do good and change the broken justice system gives her the most credibility in our book.

Kim Kardashian is known for her many sources of income, including on-screen endeavors as well as her presence in the beauty and fashion spaces. She’s an entrepreneur who is often criticized for the sheer fact that she has money and may not have had to struggle financially to get there. Though, one thing that Kim has done over the years is give some of that money away. Charity is certainly not a foreign concept to Kim.

Kim has used her brand of Shapewear, SKIMS, as a way to raise money for many family causes. In 2020, Kim proposed that her popular Cotton Collection would donate 20% of its profits to COVID-19 Emergency Response Program Baby2Baby, which provides essentials to children and families impacted by the pandemic. In the same year, Kim also announced that SKIMS would be donating $1 million to families affected by the global crisis, helping mothers and children in need.

RELATED: 16 Kim Kardashian Quotes to Make You Care Less About What Others Say

She has also been dedicated to aiding disaster relief in the past. In 2017, she and her sisters donated $500,000 to Red Cross and Salvation Army after the disaster of Hurricane Harvey in Texas. Only a year later when the wildfires in California caused mayhem, Kim and her ex-husband Kanye West hired private firefighters to protect the houses in their neighborhood along with a $500,00 donation to causes related to fighting wildfires.

Why We Don’t Talk about Kim Kardashian’s Good Side

It’s easy for us at home to criticize the rich and famous for being, well… rich and famous. But money and fame don’t make someone an inherently bad person. While Kim Kardashian has had her moments of ridiculous, outrageous behavior and her fair share of scandals, there’s another side to her that rarely gets the same amount of press.

Kim has used her earnings and insanely large platform to advocate for important causes, donate to people in need and shine a light on the justice system in America. She has also chosen to educate herself further and pursue a career in Law; not because she needed the income, but because she wants to be a part of the change.

This new age of accountability forces people to acknowledge their wrongdoings, but it can also be an unforgiving experience that entails major backlash, death threats, and the possibility of losing their livelihood. For Kim Kardashian, people will always be waiting for her to make the wrong move. Rather than expecting the worst from someone like Kim who seems larger-than-life, let’s focus on all the positive impacts she has made over the years.