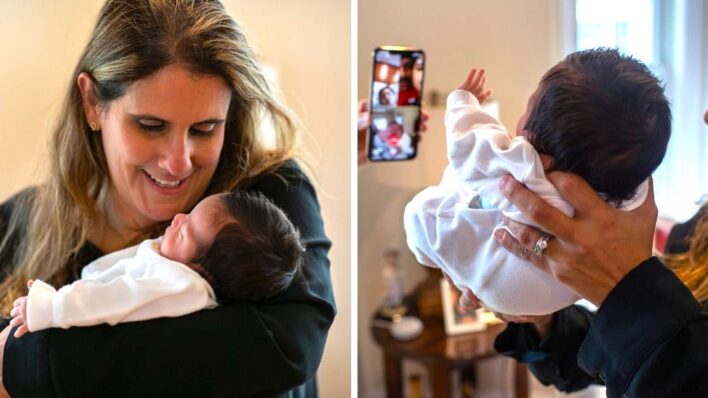 Hero Teacher Shelters Newborn While His Parents Recover From Coronavirus

Teacher Luciana Lira didn’t hesitate when she was asked to take in a newborn baby while his family was recovering from coronavirus.
By Kawter    May 5, 2020

Teacher Luciana Lira didn’t hesitate when she was asked to take in a newborn baby while his family was recovering from coronavirus.

By now, the coronavirus pandemic has seen the rise of thousands of heroes. Whether they are health care workers, taxi drivers or state troopers, people have gone out of their way to help those in need.

Luciana Lira, 32, a teacher at Hart Magnet Elementary in Stamford, Connecticut is one of these heroes. On April 4th, the mother of her student Junior, a 7-year-old Guatemalan asylum seeker, called her in a moment of despair.

Junior’s mother, Zully, was diagnosed with COVID-19–and she was going into labor.

They didn’t know anyone in the United States

Zully told Luciana that she and her husband didn’t know anyone in the United States. They had listed her as their emergency contact.

Luciana quickly got into action mode. She called Zully’s husband, Marvin, who told her he and Junior might be infected too. They had been tested but were awaiting the test results.

The couple were afraid that their newborn baby would be at risk of exposure. So they asked Luciana if she could take in the baby until they were all recovered.

“They were virtually strangers to one another,” Luciana’s friend Joy Colon wrote in a Facebook post. “And yet, my friend did what truly good people do. She said yes.”

The nurses at the hospital asked my friend if she was the mother’s sister, or perhaps, a cousin as she was listed as the primary contact, Luciana Lira responded, ‘I’m just a teacher.’

While this question would shock anyone in the moment, Luciana was quick to say yes.

Zully’s delivered by C-section, but the procedure was not without complication. The baby came out healthy, but she was greatly weakened by the coronavirus. The doctors immediately put her on a ventilator.

Luciana became the temporary guardian of baby Neysel. She returned home to her husband Alex, a child in her arms. In the meantime, both Neysel’s father and his brother were confirmed to be positive for COVID-19.

The newborn’s pediatrician praised her, noting that had the baby gone home the outcome could surely have been tragic.

This meant that Luciana’s new role as a temporary mother was extended.

She taught and nursed a newborn at the same time

Luciana stepped in to the task of her new role as a mother–and this without interrupting her other duties as a teacher. She took care of baby Neysel and managed to teach her elementary students remotely.

On April 18th, Zully had recovered enough to be taken off the elevator. Two days later, she was able to see her baby through a Zoom call. Six days later, Zully was discharged from the hospital and allowed to go home.

Zully, Marvin and Junior are still in recovery mode but they have nothing to worry about: Luciana is happy to care for Neysel for as long as it takes until his family gets back to good health.