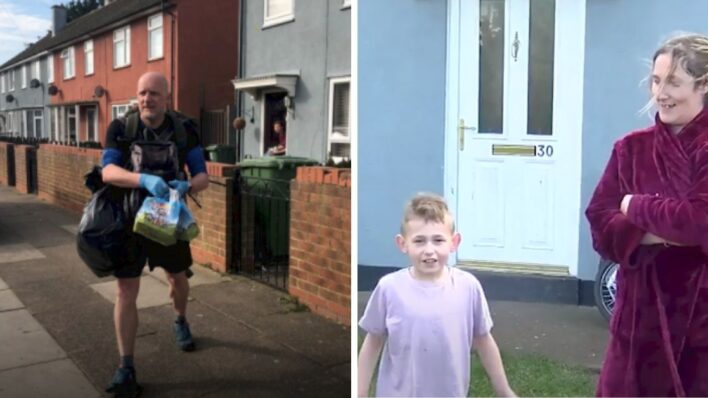 Zane Powles, an assistant headteacher in a primary school has not forgotten his disadvantaged students, who would go without lunch throughout the lockdown. So he decided to bring their lunch to their home instead.
By Kawter    April 13, 2020

Zane Powles, an assistant headteacher in a primary school has not forgotten his disadvantaged students, who would go without lunch throughout the lockdown. So he decided to bring their lunch to their home instead.

Yes, self-isolation has become our new routine. Many of us have had to make minor or major changes to our daily lives to adapt to this new preventive measure.

However, it’s undeniable that some people have suffered more than others. That is especially true of disadvantaged children, whose families were already struggling before the lockdown was implemented. Many parents, now without a steady source of income, find themselves challenged to pay bills and put food on their table.

That’s a problem Zane Powles recognized–and decided to tackle despite the limitations of the lockdown.

He walks more than 5 miles, every single day

Zane is an assistant headteacher at Western Primary School in Grimsby, Lincolnshire in England. Since the beginning of the lockdown, he, like all his students, have been forced to stay at home as measures have been instated to control the spread of the virus.

But Zane was still thinking of his pupils, many of whom come from struggling families. In fact, 4 out of 10 children at the Western Primary School are considered disadvantaged and entitled to free school meals. However, without school, many of them are at risk of not getting enough food.

Quite a lot of the families are struggling – they don’t want to drag their kids out to the shop, some of them are scared to leave their house. So I’m 100 per cent happy to help and be there for them.

Zane Powles to The Independent

Zane couldn’t help his pupils at school, so he came up with the idea of hand delivering lunches, as “it’s all about reducing the risk of the virus spreading.”

Every morning, his delivery run lasts about 1 hour and 45 minutes during which he delivers 78 meals in total. Each meal contains a sandwich, a packet of crisps, a biscuit and an apple.

In total, Zane carries a weight of almost 40 pounds on his back when he begins his daily trip. In addition to the food, he also brings them homework–though it may be less of a welcomed surprise.

He is just doing his part

Zane thought of all the healthcare workers risking their lives daily and made him decide that he would help out, in his own way.

People are risking their lives on the front line or delivering medicines as a volunteer, and I’m doing this because it’s the right thing to do to help where I can.

Zane Powles to The Sun

Zane is respectful of the social distancing rules. His delivery takes place as follows: he sets the lunch on the doorstep, knocks on the door and then backs away to the pavement or the garden until someone opens.

So far, “most of them have been fantastic in following the advice to stay in doors and to stay two metres apart so they don’t spread the virus,” Zane told The Sun.

But his new routine has also been a social one. Despite being a private person, Zane has enjoyed the connections he makes along the way, especially with the children.

I think it also gives them a sense of normalcy to see me every day. Of course, normal for them is coming to school every day, seeing me and their friends and other teachers – so having me come to see them might be reassuring.

Zane Powles to The Independent

In the midst of the coronavirus chaos, there may be a tendency to forget about children. After all, the major victims have been the elderly and people with compromised immune systems. Nevertheless, children can still feel the repercussions of this pandemic, especially when they come from a disadvantaged environment.

We should never give up on children — having a tough upbringing is never their fault.

Zane Powles to The Sun

Zane found a way to help, despite the limitations of the lockdown. Caring for his students went beyond school. His story shows that there are no limits to helping others, so long as we have the will to do it.