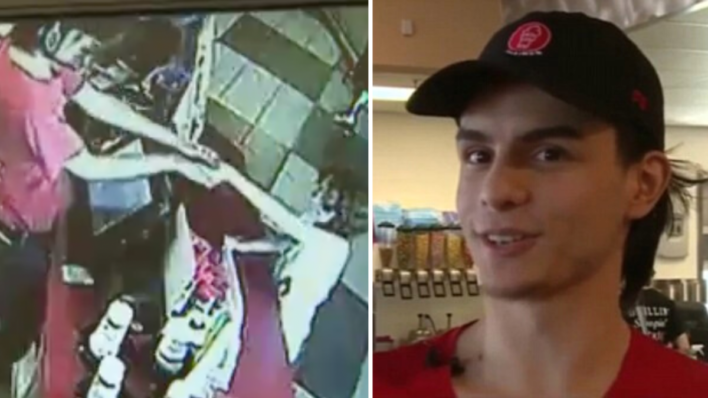 After a kind cashier paid for a little boy’s order when he is short $2, the boy returned with a note and a surprise.
By Sophie Tolias    September 23, 2022

After a kind cashier paid for a little boy’s order when he is short $2, the boy returned with a note and a surprise.

Eighteen-year-old Travis Sattler had been working behind the cash register at Freddy’s Frozen Custard and Steakburgers for just over a year when he had a touching encounter with a little boy.

After enjoying his meal with his mother, the boy walked up to the counter and ordered a mini mint Oreo custard.

“Once I told him his total he was fumbling around with his change, all of his money, kind of counting it out, and then he just hands everything to me. And it’s not enough,” Travis Sattler told KPRC 2.

So, Travis pulled out his own credit card and said: “It’s on me.” Travis also said the little boy was shocked by his gesture.

RELATED: Cashier Realizes Something Is Wrong When A Customer Tries To Purchase Gift Cards Worth $200

The boy returned to his mother and told her what happened.

Before they left the store, the boy approached Travis again and handed him a note that read: “Thank you for being so nice and paying for my custard. We need more people like you.”

Wrapped up inside the note was a $100 bill which Travis plans to put towards his nursing school tuition. “I like to think that I made a good impact on their day, and I kind of brightened it up, just like they did mine,” Travis told USA Today.

Travis’ act of kindness reached higher management and the company gave Travis an additional $100 and some goodies as a token for his good deed.

“There is a lot of good still out there no matter what we hear, especially in our young folks, we have a number of them here, Travis being one of them,” Padden Nelson, Freddy’s director of operations, told KPRC 2.

One message Travis would like to share with the world is to encourage people to help one another. “Look out for each other and help out when you can.”