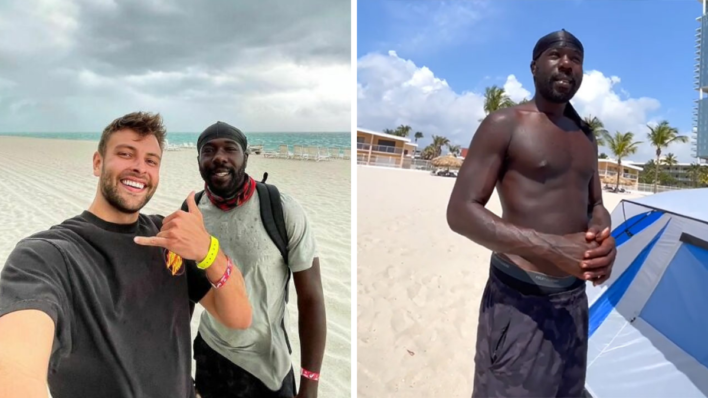 TikTok Prankster Unexpectedly Befriends Homeless Man, Helps Him Get Out Of Debt

What started as a dare sent a TikToker on a collision course to changing a perfect stranger’s life and showing
By Bryan Liquor    April 21, 2021

What started as a dare sent a TikToker on a collision course to changing a perfect stranger’s life and showing the power of friendship.

TikToker Jimmy Darts (@jimmydarts) is a viral prankster with 1.7 million followers. He’s best known for his fast food stunts at Burger King and Subway, to name a few.

He’ll often take crazy challenges from suggested by his followers and bring them to life. They include absurd exploits like “take a stranger on a wild adventure to Disney World” or “go into a Gucci store and ask why everything is so cheap.”

However, sometimes a challenge takes him down a heartwarming path, like one that came across his page one day.

“Become best friends with a stranger for the day!?????”

His search took him to a beach in Florida, where he met a man named Yahyah. Fallen on tough times, Yahyah lived in a tent and was $8,000 in debt. In other words, he could use a friend.

For the entire day, the two were inseparable. They roller skated, jumped over fences, played basketball, ate clovers and also enjoyed some good-old comfort food. For Yahya, it was a great escape from a tough life.

As their day wound down, Darts asked his followers to donate to help improve Yahyah’s life.

In a video with over 7 million views, Darts announced that he had raised over $10,000 for his new friend in just one day.

Yahyah was equally shocked and grateful.

“I just wanna thank all of you guys for helping me out, sending me your blessings, your donations.”

Afterwards, Yahyah confided in Darts, explaining just how desperate his life had become.

Yet, he says that even at his lowest point, he never gave up hope. Darts entering his life almost felt like divine intervention.

“Your boy, Jimmy, walked up on me and blessed me with an opportunity of a lifetime,” he says.

It has never been more of a challenge to make new, rewarding friendships. Jimmy Darts took on that challenge with an open heart and made a lifelong friend who will never be the same because of him.

Fortunately, you don’t have to wait for a challenge to make a meaningful connection with someone. Even a small gesture of connection can change lives.